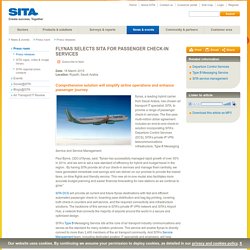 Middle East. Growth of Middle Eastern aviation outpaced the global average and will continue to do so, supported by a variety of growth strategies. 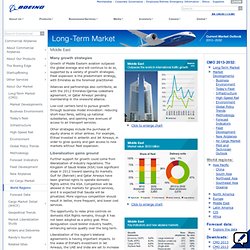 Fleet expansion is the predominant strategy, with Emirates as the foremost practitioner. Alliances and partnerships also contribute, as with the 2012 Emirates-Qantas codeshare agreement, or Qatar Airways' pending membership in the oneworld alliance. Low-cost carriers tend to pursue growth through business model innovation: reducing short-haul fares, setting up national subsidiaries, and opening new avenues of access to air transport services.

Other strategies include the purchase of equity shares in other airlines. For example, Etihad invested in airberlin and Jet Airways, in order to grow quickly and gain access to new markets without fleet expansion. Further support for growth could come from liberalization of industry regulations. The opportunity to relax price controls on domestic KSA flights remains, though it has not been adopted as a policy goal. The Airport Industry online, the latest airport industry news. Likes (0) Vanderlande Industries has won a €125 million (US$167.4m) contract to supply and install the baggage handling system for the new terminal at King Abdulaziz International Airport in Jeddah, Saudi Arabia. 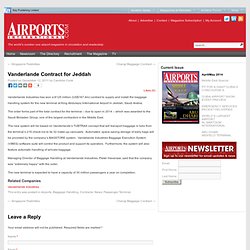 The order forms part of the total contract for the terminal – due to open in 2014 – which was awarded to the Saudi Binladen Group, one of the largest contractors in the Middle East. The new system will be based on Vanderlande’s TUBTRAX concept that will transport baggage in tubs from the terminal’s 216 check-ins to its 32 make-up carousels. Automated, space-saving storage of early bags will be provided by the company’s BAGSTORE system. Vandelande Industries Baggage Execution System (VIBES) software suite will control the product and support its operators. 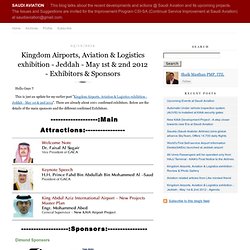 This post gives more details about the Exhibitors and their technologies and small attempt to suggest some technologies to KAIA also. Hope you read my earlier post "Airport Exchange 2011, Abu Dhabi – A must attend Event for KAIA" and as I had mentioned there this event host 6 different and most useful conference programs which are listed below. You can chose one of them depending upon your area of interest and expertise. 1. Security Summit 2. 3.Airport Operations Conference 4. 5. 6. SITA BagManager. Reduce the number of mishandled bags SITA’s annual Baggage Report shows there has been a substantial reduction in the number of mishandled bags over the past six years, a testament to the industry’s investment in automated baggage handling. 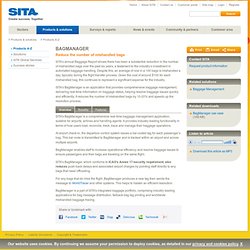 Despite this, an average of one in a 100 bags is mishandled a day, typically during the flight transfer process. Given the cost of around $100 for each mishandled bag, this continues to represent a significant expense for the industry. SITA’s BagManager is an application that provides comprehensive baggage management, delivering real-time information on baggage status, helping resolve baggage issues quickly and efficiently. It reduces the number of mishandled bags by 10-20% and speeds up the resolution process. Overview. SITA CUTE. Process your passengers more efficiently with common use technology Airports need to maximize the efficiency of their operations and the use of their real estate. 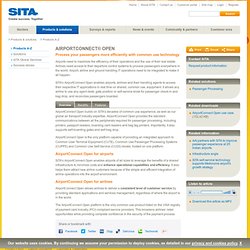 Airlines need access to their departure control systems to process passengers everywhere in the world. Airport, airline and ground handling IT operations need to be integrated to make it all happen. Solari AODB. GACA IT Vision. YAM Technologies - Access Control. A landmark deal was signed between Saudi Aerospace and YAM Technologies in January 2012 for supply and installation of Access Control systems at Jeddah Airport. 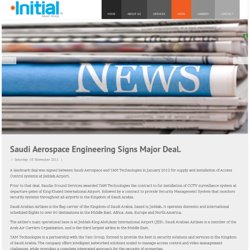 Prior to that deal, Saudia Ground Services awarded YAM Technologies the contract to for installation of CCTV surveillance system at departure gates of King Khaled International Airport, followed by a contract to provide Security Management System that monitors security systems throughout all airports in the Kingdom of Saudi Arabia. Saudi Arabian Airlines is the flag carrier of the Kingdom of Saudi Arabia, based in Jeddah. It operates domestic and international scheduled flights to over 90 destinations in the Middle East, Africa, Asia, Europe and North America. The airline's main operational base is at Jeddah-King Abdulaziz International Airport (JED). Saudi Arabian Airlines is a member of the Arab Air Carriers Organization, and is the third largest airline in the Middle East.