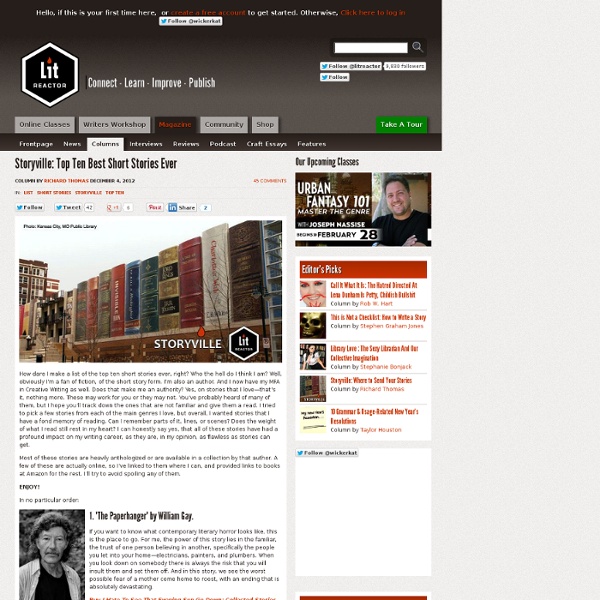 How dare I make a list of the top ten short stories ever, right? Who the hell do I think I am? Well, obviously I’m a fan of fiction, of the short story form. I’m also an author. And I now have my MFA in Creative Writing as well. Most of these stories are heavily anthologized or are available in a collection by that author. In no particular order: 1. If you want to know what contemporary literary horror looks like, this is the place to go. Buy I Hate To See That Evening Sun Go Down: Collected Stories from Amazon.com 2. For many people, this may be the only bit of her writing that they've ever read. 3. I’ve always been a fan of JCO, and her writing is literary fiction that isn’t afraid to take you over the cliff, never to return. 4. If you haven’t read his collection Jesus’ Son, by all means pick it up now. 5. You knew I’d have at least one of King’s stories on this list. 6. If you aren’t familiar with George Saunders you should really pick up some of his work. 7. 8. 9. 10. Author: Related:  Short Stories • Short stories • Short Stories

short stories A game of Scrabble has serious consequences. - Length: 4 pages - Age Rating: PG - Genre: Crime, Humor A semi-barbaric king devises a semi-barabaric (but entirely fair) method of criminal trial involving two doors, a beautiful lady and a very hungry tiger. - Length: 7 pages - Genre: Fiction, Humor Mother and Daughter had repeated this routine every school day since Jessie was five years old but today was the day Jessie started “Big School” as her mother embarrassingly insisted on telling everyone they had met for the past three months. - Length: 19 pages - Genre: Fiction He looked into her eyes. - Length: 20 pages - Age Rating: U It was Zach's idea to start a Beatles cover band in high school. - Length: 21 pages “Jonah, are you with us?” - Length: 2 pages Husselbee cleared his throat, rapped on the glass, and told the woman in the green polo shirt he had murdered a man. - Length: 13 pages She returns to the kitchen and stops in her tracks. - Genre: Children - Length: 16 pages - Genre: Sci-Fi

10 Websites Where You Can Enjoy Reading Short Stories and Flash Fiction Do you feel that shorter attention spans are giving short stories a leg up? I personally don’t feel so, because a story well-told is a story well-enjoyed, short or stretched. Short stories have always been a popular form of writing. It is also the cloth where a wannabe writer cuts his first teeth. Many of our greatest authors have also inked memorable short stories. O. Short stories are not only great writing practice for the beginner author, but it’s the same for the child who can be put on a diet of classic reading through short stories. The best thing is that you can try out a variety of genres and writing styles in the time it takes to do a bus commute. American Literature A short story site that has been worth a visit since 1997; you can check out the huge alphabetical list of literary stories, most of them classics in their own right. 365 Tomorrows East of the Web East of The Web features stories on crime, fiction, non-fiction, horror, humor, romance, sci-fi, and children’s. Story

14 Fantastic Stories From The New Yorker Archive You Should Read This Summer Rare 1959 Audio: Flannery O'Connor Reads 'A Good Man is Hard to Find' Flannery O'Connor was a Southern writer who, as Joyce Carol Oates once said, had less in common with Faulkner than with Kafka and Kierkegaard. Isolated by poor health and consumed by her fervent Catholic faith, O'Connor created works of moral fiction that, according to Oates, “were not refined New Yorker stories of the era in which nothing happens except inside the characters' minds, but stories in which something happens of irreversible magnitude, often death by violent means." In imagining those events of irreversible magnitude, O'Connor could sometimes seem outlandish--even cartoonish--but she strongly rejected the notion that her perceptions of 20th century life were distorted. “Writers who see by the light of their Christian faith will have, in these times, the sharpest eye for the grotesque, for the perverse, and for the unacceptable," O'Connor said. The grandmother didn't want to go to Florida. To continue reading the full text while you listen, open this page in a new window.

10 best short-story collections of 2015 Posted by Trisha on December 03, 2015 This year was a stellar one for short fiction. In addition to releases from celebrated practitioners of the form, like Kelly Link and Edith Pearlman, it also saw the emergence of fresh, exciting voices—and a short story collection even managed to nab the National Book Award. These 10 collections were standouts for us. Almost Famous Women by Megan Mayhew Bergman In her first collection of stories, Birds of a Lesser Paradise (2012), Megan Mayhew Bergman focused on the relationships between humans and animals. Read the full review>> Barbara the Slut (and Other People) by Lauren Holmes Lauren Holmes’ debut, Barbara the Slut and Other People, is lighter fare . . . but don’t equate light with inconsequential. Read the full review>> Fortune Smiles by Adam Johnson It takes a writer of immense confidence and talent to fashion beautiful stories that chronicle ordinary people coping with devastating challenges. Read the full review>> Get in Trouble by Kelly Link

The longest joke in the world. A man in the desert. So, there’s a man crawling through the desert. He’d decided to try his SUV in a little bit of cross-country travel, had great fun zooming over the badlands and through the sand, got lost, hit a big rock, and then he couldn’t get it started again. There were no cell phone towers anywhere near, so his cell phone was useless. He stayed with the car for a day or so, but his one bottle of water ran out and he was getting thirsty. He thinks about walking at night to avoid the heat and sun, but based upon how dark it actually was the night before, and given that he has no flashlight, he’s afraid that he’ll break a leg or step on a rattlesnake. He walks for the entire day. is really getting tempting now. it to keep people from drinking it. He pushes on, trying to get to that small town before dark. By the end of the day he starts getting worried. As it gets dim enough that he starts stumbling over small rocks and things, he finds a spot and sits down to wait for full dark and the town lights.

The Lewis Carroll Society Website - Homepage 46 Brilliant Short Novels You Can Read In A Day 10 Free Stories by George Saunders, Author of Tenth of December, “The Best Book You’ll Read This Year” For writers and serious readers, George Saunders is anything but a newcomer. Saunders published his first short story with The New Yorker back in 1992, and his new stories have regularly debuted in the magazine's Fiction section ever since. Over the years, he has gained the reputation of being a "writer's writer," with authors like Tobias Wolff saying about Saunders: “He’s been one of the luminous spots of our literature for the past 20 years.” But despite his literary accomplishments, and despite winning the prestigious MacArthur award in 2006, George Saunders never quite became a household name until January 6 of this year. If you're not familiar with Saunders' writing, then we have you covered. Related Content George Saunders Extols the Virtues of Kindness in 2013 Speech to Syracuse University Grads Neil Gaiman’s Free Short Stories Free Philip K. 30 Free Essays & Stories by David Foster Wallace on the Web 375 Free eBooks: Download to Kindle, iPad/iPhone & Nook

John Rowe Townsend John Rowe Townsend (22 May 1922 – 24 March 2014) was a British children's writer and children's literature scholar. His best-known children's novel is The Intruder, which won a 1971 Edgar Award, and his best-known academic work is Written for Children: An Outline of English Language Children's Literature (1965),[1] the definitive work of its time on the subject.[2][3] Biography[edit] Also in Britain, Noah's Castle was filmed by Southern Television, narrated by character Barry Mortimer (Simon Gipps-Kent), and transmitted in seven 25-minute episodes in 1980. Books[edit] References[edit] External links[edit] John Rowe Townsend at Library of Congress Authorities, with 48 catalogue records