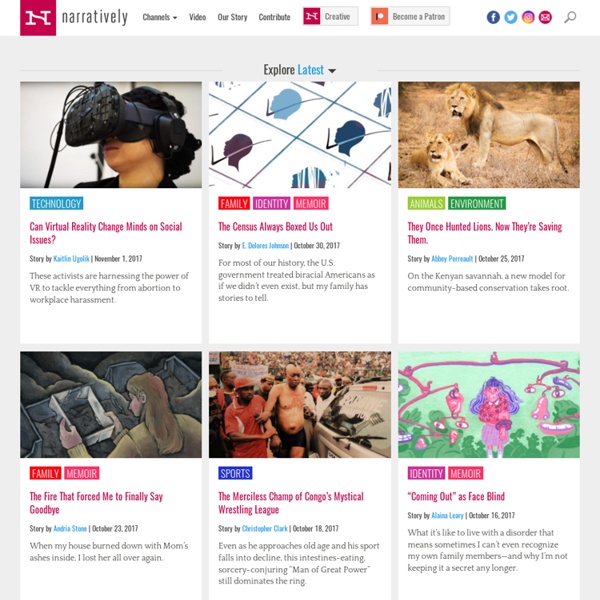 How to Make Beta Reading Work for Us (Note: I just finished a brutal two-week revision under deadline, so rather than staying up until 4 a.m. (again), I’m recycling this guest post I wrote a couple of years ago for Anne R. Allen’s blog. I hope you enjoy!) Ever struggle to make readers’ interpretations of your writing match your intentions? We probably all have. The science behind optimizing a productive work environment 1.9K Flares Filament.io 1.9K Flares × I’ve written about how creativity works in the brain before, and I found it really useful to understand this process. Or, I should say, multiple processes. There’s so much going on in the brain during creativity that science is still trying to pin down exactly how it all works. What we do know is which three parts of the brain work together to help us create and come up with new ideas: The Attentional Control Network helps us with laser focus on a particular task.

Science Two possible explanations of mysterious earthquake lights — Centuries of humans have reported strange lights moving along the ground before an earthquake strikes. Now, two different teams of scientists have two competing theories that could explain where those lights come from and how they're made. — Maggie • 5 Maggie Koerth-Baker at 6:57 am Fri, Apr 11, 2014 • 16 Oarfish are freaky sea dragons. You might remember them from the beaching incidents last fall, when two oarfish turned up on the coast of California within a week. Elevate Your Visual Storytelling With The Paper Wings Show! Interview With Claire Keane :: Paper Wings Show #33 Claire Keane is a brilliant illustrator and visual development artist, who has helped to develop numerous immersive worlds, including Tangled and Duet. After leaving Disney, she released her first illustrated children’s book: Once Upon A Cloud. It’s a beautifully rendered, heartwarming story about family and following your dreams.

Gary's Social Media Count Click for App Store Page Original Counter and Post from 24 Sep 2009! June 2013 ‘Social’ Update (mobile, games & heritage to come) June 2012 ‘Social’ Update August 2011 Update The Internet Can Cultivate Writing. Good Writing. Image from LoadingArtist.com Almost anyone who cares about language and knows about or uses the Internet has been guilty at one time or another of demonizing the world wide web for its effects on the English language. “The Internet makes it easy for people, including professional writers, to publish writing publicly without editing.” “The Internet encourages casual writing and doesn’t reinforce proper writing skills.” “Students would write better if they weren’t on Facebook all the time.” It’s easy to blame the Internet and say that if it didn’t exist, written English would be on solid ground.

18 Things Highly Creative People Do Differently This list has been expanded into the new book, “Wired to Create: Unravelling the Mysteries of the Creative Mind,” by Carolyn Gregoire and Scott Barry Kaufman. Creativity works in mysterious and often paradoxical ways. Creative thinking is a stable, defining characteristic in some personalities, but it may also change based on situation and context. Inspiration and ideas often arise seemingly out of nowhere and then fail to show up when we most need them, and creative thinking requires complex cognition yet is completely distinct from the thinking process. Inspirational Short Stories 2015 : Uplifting, Feel Good Stories The inspirational, feel good stories posted in this section are from everyday visitors, like YOU, through our post a story page. Please browse through the stories and then share yours! Learn To Appreciate By Sonia Kaur on September 29, 2015 / 172 views Appreciation are few words of praise which can enhance anybody's confidence and lack of appreciation puts you down, low in confidence.

garfield minus garfield garfield minus garfield Garfield Minus Garfield is a site dedicated to removing Garfield from the Garfield comic strips in order to reveal the existential angst of a certain young Mr. Jon Arbuckle. It is a journey deep into the mind of an isolated young everyman as he fights a losing battle against loneliness and depression in a quiet American suburb. Buy the book! At Barnes & Noble or Amazon.com