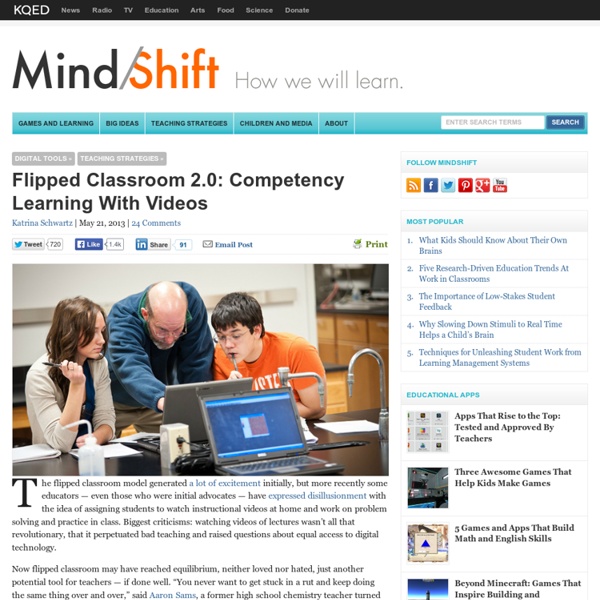 The flipped classroom model generated a lot of excitement initially, but more recently some educators — even those who were initial advocates — have expressed disillusionment with the idea of assigning students to watch instructional videos at home and work on problem solving and practice in class. Biggest criticisms: watching videos of lectures wasn’t all that revolutionary, that it perpetuated bad teaching and raised questions about equal access to digital technology. Now flipped classroom may have reached equilibrium, neither loved nor hated, just another potential tool for teachers — if done well. “There is no place for them to hide. The two teachers admit when they started flipping their classrooms they put everything into video form. “The best use of class time is to meet the individual needs of each learner, not driving the class with predetermined curriculum,” Sams said. [RELATED READING: Can TED Talks Really Work in the Classroom?] “The flipped classroom is not about the video. Related:  Allmänt lärande

27 Simple Ways To Flip The Classroom We chat about flipping classrooms every week on Edudemic and it’s for good reason: this relatively new classroom organization style has been adopted by countless teachers around the world. Typically, the kind of adoption flipped classrooms has seen is reserved for major things like the Common Core or even iPad integration. But flipped classrooms has teachers, administrators, and students all engaged and placing the learning on center stage rather than the teacher. See Also: What’s A Flipped Classroom? If you’re looking to take the first step(s) toward flipping your classroom, online course, or other form of education … this visual by Mia MacMeekin ( check out her awesome blog here and her popular ‘ 27 Ways To Be A 21st Century Teacher ‘ visual we ran here) details some bite-size ideas for anyone looking to flip the classroom.

Flipped Learning and Control I was able to join some fantastic educators today last Friday for a Flipped Learning workshop hosted by the Michigan Association of Secondary School Principals. I was part of a group from TechSmith, while Dan Spencer, Laura Bell, Jonathan Palmer, Missy McCarthy, Delia Bush, David Fouch, and Greg Green were panelists for the workshop. I’ve been acquainted with Greg since I heard about his plans to flip his entire high school. I met him in person this past fall, and I’ve been challenged by his thoughtfulness and questions ever since. Last fall, Greg and I had a conversation about why he flipped Clintondale…he wanted more control. Confession: I didn’t understand what he meant at all. Fast forward to this morning. We are at a point where information and support are constantly in a power struggle. Enter personal computing. The key to this is that we successfully blend the access to information and the support only a teacher can give.

The &amp;quot;Flipped&amp;quot; Classroom and Transforming Education Recently, I wrote a post regarding some ideas that I did not believe that would transform school culture. Although most agreed on two of the ideas that I shared, there was a large contingent of educators that argued regarding the “flip” and are very passionate about what it can do for the classroom (one even referred to me as a “nut” for even suggesting this!). Also, Forbes magazine talked about the Khan Academy and the “flipped classroom” being one of the most important stories of 2012. Whether it was inspired by Salman Khan or by educators, it has certainly stirred a movement: Entire school districts are now reworking their curriculum, pedagogy, classroom structure and technology around Khan Academy videos. The net result of these changes is that students in Khan-centered schools don’t watch Khan videos in the classroom. As I see how passionate educators are regarding this idea, I can definitely see why it has merit. The Year of the Learner We need to do more.

Why I Gave Up Flipped Instruction A little over a year ago I wrote a post about the flipped classroom, why I loved it, and how I used it. I have to admit, the flip wasn’t the same economic and political entity then that it is now. And in some ways, I think that matters. Here’s the thing. When I recently re-read the post, I didn’t disagree with anything I’d said. Yet my brief love affair with the flip has ended. When I wrote that post, I imagined the flip as a stepping stone to a fully realized inquiry/PBL classroom. What is the flip? The flipped classroom essentially reverses traditional teaching. When I first encountered the flip, it seemed like a viable way to help deal with the large and sometimes burdensome amount of content included in my senior Biology & Chemistry curricula. My flipped experiments I first encountered the flip in a blog post. My students loved the idea of trying something that very few other students were doing. We began to shift What was my role? The flip faded away The flip is gone for good No.

Learning with Technology: Flipped Teaching Guest post by Steve Salik, Ph.D. Over the past three years or so, screencasting and lecture capture technology have become a hot topic in education. While the technology itself isn’t new, the discussion about how these technologies can improve teaching and learning has taken on a new urgency. The phenomenal success and growth of the Khan Academy has been the primary catalyst for this discussion and demonstrated how progress in education is so often trapped by process. Converting lectures to digital assets Khan didn’t invent the idea of the flipped classroom, it was initially proposed by Lage, Platt and Treglia in their article “Inverting the Classroom: A Gateway to Creating an Inclusive Learning Environment.” The jury is still out While there’s been significant anecdotal evidence that the flipped classroom is effective, from a scholarly perspective the jury is still out and research is ongoing. The intersection between teaching, learning and technology Is it too long? 12 Brain Rules Related

Välkommen till en kunskapsbank för Learning study och Lesson study! | Learning study The Teacher's Guide To Flipped Classrooms Since Jonathan Bergman and Aaron Sams first experimented with the idea in their Colorado classrooms in 2004, flipped learning has exploded onto the larger educational scene. It’s been one of the hottest topics in education for several years running and doesn’t seem to be losing steam. Basically, it all started when Bergman and Sams first came across a technology that makes it easy to record videos. And voila: a movement began. A 2014 survey from the Flipped Learning network found that 78% of teachers said they’d flipped a lesson, and 96% of those that tried it said they’d recommend it. What is a flipped classroom? Once a new idea becomes a buzzword, pinning down the definition can become a tad more challenging. That gets the idea across, but it’s a bit of a mouthful. Most people hear “flipped learning” and picture kids watching videos at home, but proponents of it suggest that it doesn’t have to be exclusively about videos. The Benefits of Flipping Your Classroom 1. 2. 3. 1. 2. 3. 4. 5.

Educators Evaluate 'Flipped Classrooms' Published Online: August 27, 2012 Published in Print: August 29, 2012, as Educators View 'Flipped' Model With a More Critical Eye Includes correction(s): September 4, 2012 Benefits and drawbacks seen in replacing lectures with on-demand video A growing number of educators are working to turn learning on its head by replacing traditional classroom lectures with video tutorials, an approach popularly called the "flipped classroom." The movement was inspired partly by the work of Salman Khan, who created a library of free online tutoring videos spanning a variety of academic subjects, known as the Khan Academy, which many view as a touchstone of the flipped-classroom technique. The term "flipping" comes from the idea of swapping homework for class work. However, as most educators who have begun to use the technique are quick to say, there are a multitude of ways to "flip" a classroom. —Illustration by Chris Whetzel "That's not how all of us learn," he said. Mr. Sharing Questions 1. 2. 3. 4. 5.