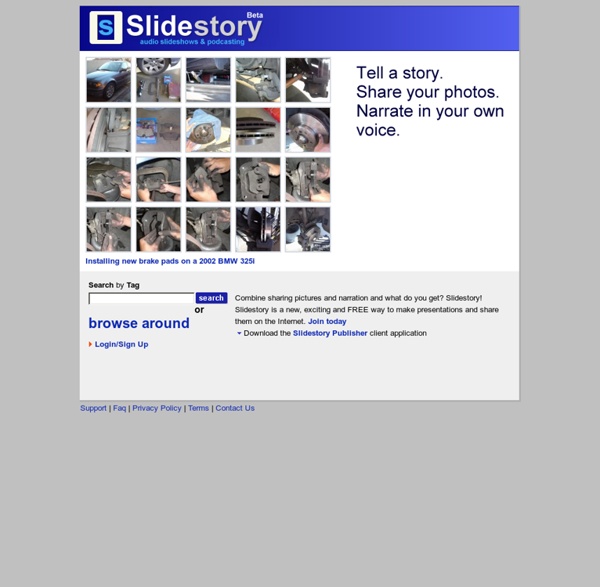 8 Steps to Great Digital Storytelling Stories bring us together, encourage us to understand and empathize, and help us to communicate. Long before paper and books were common and affordable, information passed from generation to generation through this oral tradition of storytelling. Consider Digital Storytelling as the 21st Century version of the age-old art of storytelling with a twist: digital tools now make it possible for anyone to create a story and share it with the world. WHY Digital Storytelling? Digital stories push students to become creators of content, rather than just consumers. Syllabus bites: Visual literacy - Visual texts What are visual texts? Visual texts range from a photograph or illustration in a print magazine to the visual components of multimodal texts. The visual language choices and conventions in texts communicate and shape meaning in a range of contexts. In studying visual texts, students use the metalanguage of visual texts to describe, discuss and evaluate how they communicate meaning to the audience. Responding to visual texts Responding to visual texts and visual components of multimodal texts requires the same approach as when responding to written and spoken texts.

create barcodes QR DataMatrix You can encode either a link to a website, a message to a friend, or your contact details. Then turn the information into a mobile barcode, one that can be printed on stationery, advertising or packaging, a t-shirt, or even built into a website or a Facebook page - and read by an i-nigma enabled mobile device. Creating a mobile barcode is easy. REL - HISTORY Responding to text Themes, voice and 'once' Table the themes in the novel, such as 'bullying' and 'stories', and write examples of each. Syllabus bites: Visual literacy - Photographs Each tab in this guide contains key questions to consider when analysing photographs. Use it to complete the activities in the Task tab. What is your reaction to the photograph?

Tagxego word clouds Processing ... Personal $ Svg $20 ✓ REL - HISTORY Overview Felix has been left in an orphanage by his bookseller parents who have supposedly gone to protect their books and business. It is hidden knowledge that Felix is Jewish. Underground with Koven: Notorious Adelaide graffiti artist inspired by the 'nanny state' Posted A nanny state, a regimented culture, gratuitous rules that defy common sense, they are all driving forces behind rebellious vandalism, according to one of Adelaide's most notorious graffiti artists. The illusive artist who goes by the name Koven has been writing his tag on structures and walls around the city since the mid 2000s. He is perhaps one of the city's most recognised writers due to some audacious roll-ups (graffiti painted up high on buildings, often with rollers).

Dreamtime stories: how the Great Southern ranges were formed - ABC Great Southern - Australian Broadcasting Corporation The Porongurup mountain range is one of the oldest in the world. From its peaks, the Stirling Ranges can be seen. The mountains lie on the land of the Menang people, spanning across the Great Southern region. Dreamtime stories about the mountains differ from generation to generation, but the message remains the same: the ranges have been interlaced from the very beginning. Menang elder Vern Gillies shared the story passed down to her, of how the mountain ranges came into being. "It's a story of anger, vengeance and grief," she begins.

Jonathan Klein: Photos that changed the world In my industry,we believe that images can change the world.Okay, we're naive, we're bright-eyed and bushy-tailed.The truth is that we know that theimages themselves don't change the world,but we're also aware that, since the beginning of photography,images have provoked reactions in people,and those reactions have caused change to happen. So let's begin with a group of images.I'd be extremely surprisedif you didn't recognize many or most of them.They're best described as iconic:so iconic, perhaps, they're cliches.In fact, they're so well-knownthat you might even recognize themin a slightly or somewhat different form. (Laughter) Well, I think what is far worseis man's destructive power over man.Samuel Pisar, an Auschwitz survivor, said,and I'll quote him,"The Holocaust teaches us that nature,even in its cruelest moments,is benign in comparison with man,when he loses his moral compass and his reason." And thank you to all the photographers.

Delicious Bookmarks Bookmarklet Our bookmarklet lets you quickly add links from any web page. Make sure your bookmarks toolbar is visible, then drag this button there. Click '+ Add to Delicious' any time you want to add a page. Safari users need to enable third party cookies to remain logged in to the bookmarklet. This can be done by going to your Safari Preferences, selecting Privacy, and setting Block cookies and other website data to Never. What is the ‘Dreamtime’ or the ‘Dreaming’? English cannot express the ‘Dreaming’ ‘Dreamtime’ or ‘Dreaming’ has never been a direct translation of an Aboriginal word. The English language does not know an equivalent to express the complex Aboriginal spiritual concepts to white people. Aboriginal languages contain a lot of words for spirituality and beliefs, such as tjurkurrpa, jukurrpa, tjurgurba (Pitjantjatjara people, north-western South Australia),altjeringa, alcheringa, alchera, aldjerinya (Arrernte people, central Australia),palaneri,bugaregara,ngarangani,ungud (Ngarinyin people, north-Western Australia),wongar (north eastern Arnhem Land),bugari (Broome, north-Western Australia).