The English Word That Hasn’t Changed in Sound or Meaning in 8,000 Years. One of my favorite words is lox,” says Gregory Guy, a professor of linguistics at New York University. 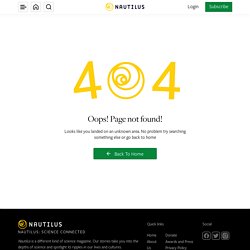 There is hardly a more quintessential New York food than a lox bagel—a century-old popular appetizing store, Russ & Daughters, calls it “The Classic.” But Guy, who has lived in the city for the past 17 years, is passionate about lox for a different reason. - The world's best way to learn Danish. Looking into Wales: a nation displayed. There are only two British news stories about Germany: new Nazis and old Nazis. If the small Bavarian town of Landsberg is known at all it will be because Hitler wrote Mein Kampf there in 1923-4. 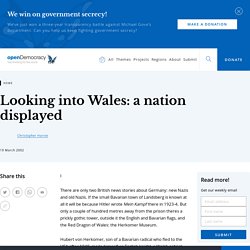 But only a couple of hundred metres away from the prison theres a prickly gothic tower, outside it the English and Bavarian flags, and the Red Dragon of Wales: the Herkomer Museum. Hubert von Herkomer, son of a Bavarian radical who fled to the USA after 1848, made himself an English knight, a Welsh patriot and a Bavarian painter. His wife was Welsh, and he confected the gear which the Welsh crachach transform themselves each summer into the Druids at their National Eisteddfod. Theres a timely moral here for those worried about an English tide swamping the language  a theme at the 2001 Eisteddfod, thanks to a speech by John Elfed Jones  but perhaps even more for a London which has, since devolution, become steadily more self-obsessed. William Goscombe John, Lewis Edwards, c.1910? Negotiation and tolerance or brutal show of force? The Normans in Southern Italy.

By Georgios Theotokis The Norman expansion in 11th century Europe is a movement of enormous historical importance which took men and women from the duchy of Normandy to settle in England, Apulia, Calabria, Sicily and the Principality of Antioch. 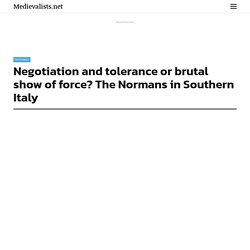 The Norman expansion in the South is particularly interesting, because it represents a story of a few bands of Norman mercenaries who managed to subdue local Lombard princes, drive out Byzantine and Muslim rulers who ruled the areas for centuries and began the process of unifying a political entity that would later develop to the Kingdom of Sicily. I want to focus on a series of questions: What was the strategy of the Norman expansion in Apulia, Calabria and Sicily and what were the factors that shaped it? 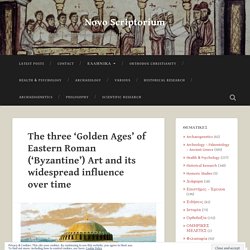 Sophia in Constantinople is the masterpiece of Byzantine art, and it is at the same time one of those monuments where some of the most characteristic features of that art appear most clearly. Thus if one would understand the nature of the Christian art of the East and in what its originality consisted, one must go first of all to this essential building-to this “Great Church” as it was called throughout the East during the Middle Ages. 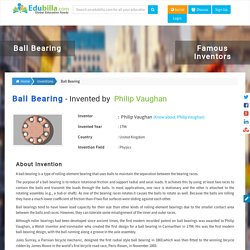 The purpose of a ball bearing is to reduce rotational friction and support radial and axial loads. It achieves this by using at least two races to contain the balls and transmit the loads through the balls. In most applications, one race is stationary and the other is attached to the rotating assembly (e.g., a hub or shaft). As one of the bearing races rotates it causes the balls to rotate as well. Because the balls are rolling they have a much lower coefficient of friction than if two flat surfaces were sliding against each other.

Unearthed Ancient British chieftain and probable shaman reveal secrets about old burial rituals. The once monumental final resting place of a probable prehistoric chieftain and, potentially, his shaman has been discovered in southwest England. 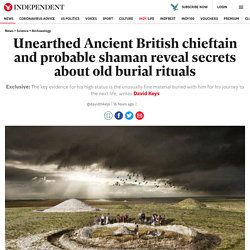 It’s one of the most fascinating archaeological discoveries in southern Britain in recent years. Significantly, the duo formed part of a remarkable social and political process which changed human history – and still shapes our world today. 881bbad6bcf4824cefde0c235316654235cb.pdf?_ga=2.216244246.1283164858.1570878918-2124728752. Welsh Plains. Why are so many afraid to confront Britain’s historical links with the slave trade? Seldom have so many people taken to print and the airwaves to make the case for academic incuriosity. 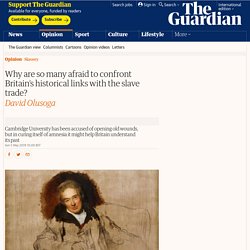 Rarely has the search for new knowledge, undertaken by a university of world renown, been so vocally condemned. That is what happened when Cambridge University announced a new academic research project to determine the extent to which the university (although not its wealthy colleges) “contributed to, benefited from or challenged” slavery and the slave trade. Yahoo fait dÃ©sormais partie dâOath. Paris (AFP) - The fossilised remains of an early human cousin found in the mountains of Tibet proves mankind adapted to live at high altitude far earlier than previously thought, scientists said Wednesday. 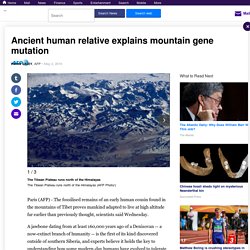 A jawbone dating from at least 160,000 years ago of a Denisovan -- a now-extinct branch of humanity -- is the first of its kind discovered outside of southern Siberia, and experts believe it holds the key to understanding how some modern-day humans have evolved to tolerate low-oxygen conditions. Contemporaries of the Neanderthals -- and like them, possibly wiped out by anatomically modern man, Homo sapiens -- the Denisovans first came to light a decade ago.

Their existence was determined through a piece of finger bone and two molars unearthed at the Denisova Cave in southern Siberia's Altai Mountains and dated to some 80,000 years ago. "To have beings, even if a little archaic, living at 3,300 metres (11,000 feet) on the Tibetan plateau 160,000 years ago.... Why Spain Does not Remember. In March 1939 General Francisco Franco’s fascist troops entered Madrid, after having subjected the Spanish capital to a brutal two-and-half-year-long siege. 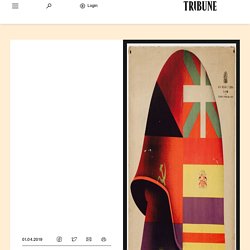 When the Spanish civil war ended on April 1st, at least half a million people lay dead – including approximately 150,000 as a direct result of Francoist terror. In the aftermath, 20,000 Republican prisoners were executed and thousands more died in Francoist concentration camps or in refugee camps in Southern France. Though a defining moment in Spanish history, commemorations of the 80th anniversary of the Civil War’s end will be muted within the country itself.

The wounds of Franco’s dictatorship and the brutal post-war years remain raw in contemporary Spain. The eightieth anniversary is an important date, but it’s almost better understood outside of Spain than it is inside the country itself. Was there more to 1910 than Tonypandy? The story of the honest Welsh miner betrayed by a hostile government has long fascinated, but were the riots really just a small part of a much bigger picture? - Free Online Library. Athens 1944: Britain’s dirty secret. This article is the subject of a column by the readers’ editor. 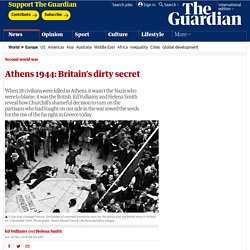 “I can still see it very clearly, I have not forgotten,” says Títos Patríkios. “The Athens police firing on the crowd from the roof of the parliament in Syntagma Square. The young men and women lying in pools of blood, everyone rushing down the stairs in total shock, total panic.” And then came the defining moment: the recklessness of youth, the passion of belief in a justice burning bright: “I jumped up on the fountain in the middle of the square, the one that is still there, and I began to shout: “Comrades, don’t disperse! The river fisherman looking for someone to learn his dying craft. At one time Carmarthen was Wales' biggest port with some 2,000 townsfolk making their living from the river. This included the tradition of coracle fishing which dates back to Roman times and which became a large part of Wales' heritage.

It's a very different picture today where coracle fishing is now a dying trade. It now only exists in part of Wales and even uses its own unique form of Welsh. For coracle fishermen share words which are used by nobody else and some of which are only used on specific rivers. If you meet a coracle fisherman they might refer to places on the river by names known only to the community. The Atlantic Slave Trade Visualized in Two Minutes: 10 Million Lives, 20,000 ...

Not since the sixties and seventies, with the black power movement, flowering of Afrocentric scholarship, and debut of Alex Haley’s Roots, novel and mini-series, has there been so much popular interest in the history of slavery. We have seen Roots remade; award-winning books like Edward Baptist’s The Half Has Never Been Told climb bestseller lists; and The Freedman’s Bureau Project’s digitization of 1.5 million slavery-era documents gives citizen-scholars the tools to research the history on their own.

In addition to these developments, Slate magazine has designed a multipart, multimedia course, “The History of American Slavery,” as part of its online educational initiative, “Slate Academy.” Visualizing 315 years—“from the trade’s beginning in the 16th century to its conclusion in the 19th"—the animation displays slave ships as increasing numbers of black dots zipping across the Atlantic to the Americas from the African coasts.

The dots “also correspond to the size of each voyage. Welsh farmstead is rare medieval hall house, experts confirm. A Welsh farmhouse that was once in such poor condition that rainwater ran through its rooms is in fact an exceptionally rare 600-year-old medieval hall house, it has been confirmed, after conservation experts used a groundbreaking new dating technique originally developed by climate change scientists. Llwyn Celyn, which lies in the Black Mountains on the border of England and Wales, was completed in 1420, an analysis of its timbers found, making it one of only a tiny number of domestic buildings to survive from one of the most destructive periods in Welsh history, immediately following the failed revolt of the Welsh prince Owain Glyndŵr. Conservation experts from the Landmark Trust, who first encountered the building in a perilous state of disrepair but still inhabited by two farmers in 2007, initially believed it dated from much later in the 15th century.

Instead, they turned to a technique developed in the geography department at Swansea University. Three of the world's earliest ever beer cans from Wales have sold for £1,300. Three historic beer cans produced in Llanelli have sold for a whopping £1,300. Llanelli has a rich history of brewing, and the Felinfoel Brewery cans were amongst some of the earliest produced. Two are red and black with silver livery and a dragon logo, while the third was for a pale ale with a yellow ground, which features the inscription "Beer at its best from a can. " “Canned beer is better because the goodness is sealed in and the flavour reserved," the makers added. Felinfoel Brewery was one of the first in the world to produce canned beer in the 1930s, with the practice now commonplace the world over.

The story of how Llanelli brewers stunned the drinks industry by putting their beer in cans. Amphora graveyard reveals Rome’s trading networks - The Archaeology News Network. The world’s largest ancient Roman rubbish dump is revealing intriguing details about the extent and sophistication of trade in the Mediterranean 2,000 years ago. Monte Testaccio is an artificial hill in the centre of Rome that is made up of an estimated 25 million shards of broken amphorae, many from as far afield as Spain and North Africa. The amphorae, containing wine and olive oil, were broken up and dumped on the spoil heap after being unloaded from a nearby port on the River Tiber. They could not be reused because wine and oil residue seeped into the clay, turning rancid after a while and preventing the containers from being recycled for fresh shipments. Each amphora was painted or stamped with an inscription detailing which product it contained, how much it weighed, where it was produced, when it was shipped to Rome and how much import duty was paid.