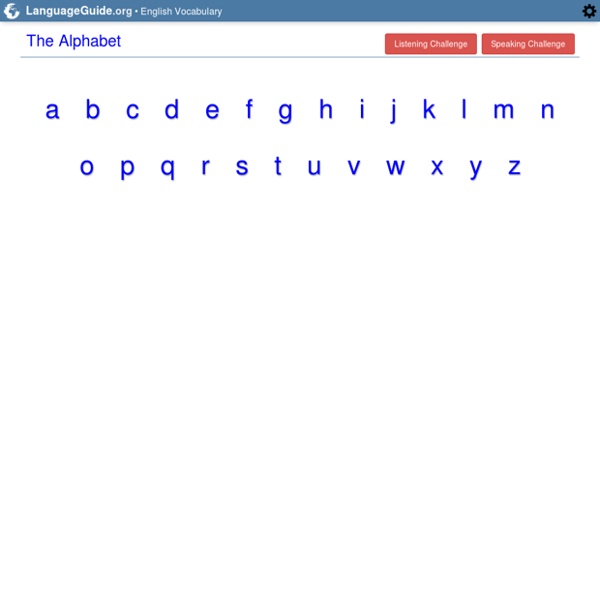 20 words that once meant something very different Words change meaning over time in ways that might surprise you. We sometimes notice words changing meaning under our noses (e.g., unique coming to mean “very unusual” rather than “one of a kind”) — and it can be disconcerting. How in the world are we all going to communicate effectively if we allow words to shift in meaning like that? The good news: History tells us that we’ll be fine. Words have been changing meaning — sometimes radically — as long as there have been words and speakers to speak them. Here is just a small sampling of words you may not have realized didn’t always mean what they mean today. Pronouncing The Alphabet The alphabet is the set of 26 letters (from A to Z) that we use to represent English in writing. It is important to understand that the letters of the alphabet do NOT always represent the same sounds of English. This section is about pronunciation. And these pages are about pronunciation of the letters of the alphabet.

learnenglishlikeme I also want to share with you the complete list of phrasal verbs I worked with during the last 10 days. If you want to know more about the strategy I used, you can also read the next post … How you can learn phrasal verbs easily Remember that you can find an extensive summary of my Phrasal verbs learning process in the post … How to learn phrasal verbs easily – Part 2 The Complete List Of Phrasal Verbs… I chose these 50 phrasal verbs at random: As you can see I didn’t work with all the different meanings that every phrasal verb have. Alphabet Monster Game My boys (5 & 2) LOVED playing this fun ABC game--because the next best thing to feeding yourself is feeding an Alphabet Monster! First, you'll need to make a set of ABC circles: Trace circles on construction paper using a small cup (mine are about 2 1/2" big)Cut them outWrite all the Letters on the circles. (I made a set of Upper-case Letters, and a set of Lower-case Letters.) Second, you'll need to create a Monster:

monsoon A monsoon is a seasonal change in the direction of the prevailing, or strongest, winds of a region. Monsoons cause wet and dry seasons throughout much of the tropics. Monsoons are most often associated with the Indian Ocean. Monsoons always blow from cold to warm regions. The summer monsoon and the winter monsoon determine the climate for most of India and Southeast Asia. Summer Monsoon refugee Refugees are people who must leave their home area for their own safety or survival. A refugee’s home area could be a country, state, or region. People become refugees for many reasons, including war, oppression, natural disasters, and climate change. Most refugee laws are based on a 1951 United Nations document, the Convention Relating to the Status of Refugees.

Multicultural Britain This is Southall Broadway in West London. This area has one of the largest Asian populations in London. The United Kingdom is an ethnically diverse country with many different communities that reflects the multicultural nature of Britain. Many British people’s families originally come from overseas. Boarding schools in the UK: Class Robert: Hello, my name is Robert, and I’m studying music at GCSE, as well as many other subjects.Ursule: Hi, my name’s Ursule. I’m from Lithuania and this is my third year in the school. I’m in Year 11 right now.Robert: And for my music GCSE I have lessons three times a week and we study lots of different music from the Baroque era right until the world music.Ursule: For music, we’ve got two different teachers and one of the teachers teaches us erm, composition and the other one mainly teaches us er, the music history, and all the theory that we need to know for our exams.Teacher 1: And then, of course, we have excellent connections, through our long history of preparing students for university, to some of the top universities in the UK, and, increasingly, worldwide as well.Teacher 2: In terms of more formal feedback that supports them, we regularly assess their progress and offer them some targets to help them focus on things that they can improve in their work.

Babysitting: harder than it looks Most people assume that babysitting is one of the easiest jobs available for young people. Many imagine a bored teenager putting a few well-behaved children to bed at 9 o'clock and then continuing to watch television until the parents return home to hand over some money. Well, I can tell you how wrong that stereotype is. As I only work three days a week in France, I decided that a good way to get out of the house – and earn some extra money – would be to look for a babysitting job. I looked after children a lot when I was at school, and I remembered it as being quite easy.

Vocabulary It is more fun to talk with someone who doesn't use long, difficult words but rather short, easy words like 'What about lunch?'Winnie-the-Pooh Welcome to EnglishClub Vocabulary! If you don't find what you want here, feel free to ask a question at our Vocabulary Help forum. What is Vocabulary? This page explains what vocabulary - or vocab - is and why it is important for learners of English.