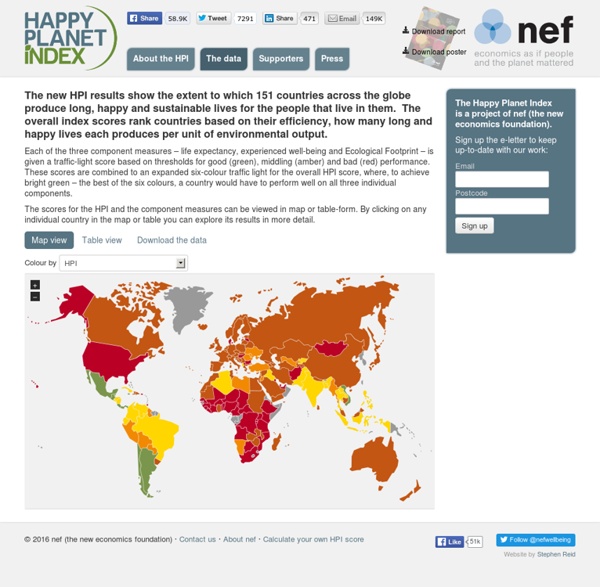 The new HPI results show the extent to which 151 countries across the globe produce long, happy and sustainable lives for the people that live in them. The overall index scores rank countries based on their efficiency, how many long and happy lives each produces per unit of environmental output. Each of the three component measures – life expectancy, experienced well-being and Ecological Footprint – is given a traffic-light score based on thresholds for good (green), middling (amber) and bad (red) performance. These scores are combined to an expanded six-colour traffic light for the overall HPI score, where, to achieve bright green – the best of the six colours, a country would have to perform well on all three individual components. The scores for the HPI and the component measures can be viewed in map or table-form. By clicking on any individual country in the map or table you can explore its results in more detail.

Three minutes with Hans Rosling will change your mind about the world Jörgen Hildebrandt Hans Rosling doesn’t consider himself an optimist or a pessimist but rather a ‘possibilist’. Hans Rosling knew never to flee from men wielding machetes. “The risk is higher if you run than if you face them,” he says. So, in 1989, when an angry mob confronted him at the field laboratory he had set up in what is now the Democratic Republic of the Congo, Rosling tried to appear calm. Origin of crops by Colin K. Khoury, Harold A. Achicanoy, Carlos Navarro-Racines, Steven Sotelo, and Andy Jarvis at the International Center for Tropical Agriculture (CIAT). Version 1.0 (May 2016). This work is licensed under a Creative Commons Attribution 4.0 International (CC BY 4.0). This work is associated with the publication:

Compare countries Select from over 250 indicators and 200 countries from the left menu. Play around with different time periods and chart types. You can also use the . To see the origins of the data, look at the bottom of every chart and at our list of . World bank definition: Annual percentage growth rate of GDP at market prices based on constant local currency.

OpenStreetMap Where is this? Reverse Directions Welcome to OpenStreetMap! OpenStreetMap is a map of the world, created by people like you and free to use under an open license. Hosting is supported by UCL, Bytemark Hosting, and other partners. Learn More Start Mapping List of countries by GDP (PPP) per capita - Wikipedia Wikimedia list article Countries by GDP (PPP) per capita (Int$) in 2018 according to the IMF This page is a list of the countries of the world by gross domestic product (at purchasing power parity) per capita, i.e., the purchasing power parity (PPP) value of all final goods and services produced within a country in a given year, divided by the average (or mid-year) population for the same year. Method The gross domestic product (GDP) per capita figures on this page are derived from PPP calculations. Such calculations are prepared by various organizations, including the International Monetary Fund and the World Bank.

Per Capita GDP Definition What Is Per Capita GDP? Per capita gross domestic product (GDP) is a metric that breaks down a country’s GDP per person. It is calculated by dividing GDP over a country’s population. GDP per capita is a universal measure globally for gauging the prosperity of nations. Worldwide it is used by economists alongside GDP to analyze the prosperity of a country and its economic growth. Understanding Per Capita GDP Earth - Your life on earth Explore BBC Earth's unique interactive, personalised just to you. Find out how, since the date of your birth, your life has progressed; including how many times your heart has beaten, and how far you have travelled through space. Investigate how the world around you has changed since you've been alive; from the amount the sea has risen, and the tectonic plates have moved, to the number of earthquakes and volcanoes that have erupted. Grasp the impact we've had on the planet in your lifetime; from how much fuel and food we've used to the species we've discovered and endangered. And see how the BBC was there with you, capturing some of the most amazing wonders of the natural world. Explore, enjoy, and share with your friends either the whole page, or your favourite insights.