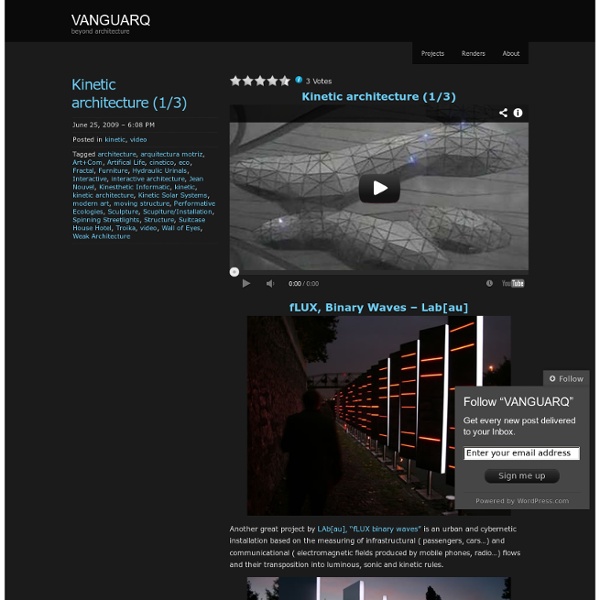 Kinetic architecture (1/3) fLUX, Binary Waves – Lab[au] Another great project by LAb[au], “fLUX binary waves” is an urban and cybernetic installation based on the measuring of infrastructural ( passengers, cars…) and communicational ( electromagnetic fields produced by mobile phones, radio…) flows and their transposition into luminous, sonic and kinetic rules. This relation between the installation and the urban activity happens in real time and sets each person as an element of the installation, as a centre of the public realm. The installation fLUX, binary waves is constituted by a network of 32 rotating and luminous panels of 3 meter-high and 60 centimetres wide, placed every 3 meters to form a kinetic wall. The panels rotate around their vertical axis, and have a black reflective surface on one side, the other being plain mat white. Shih Chieh Huang Installation artist Shih Chieh Huang transforms spaces with everyday objects. The exhibition is on till June 6th 2009 Spinning Streetlights

Category: Interactive Really interesting projection concepts by NuFormer Digital Media in the Netherlands. NuFormer Digital Media develops high-skill 3D video mapping projections. These 3D projections will be custom-made to fit any specific building and will be exposed by a battery of powerful projectors. More on their website. Read full article » No Comments » September 23rd, 2009 in Architecture, Augmented Reality, Cognitive, Control, Gesture, Interactive, Interfaces, Spatial, Tangible, Touch by miles Really interesting augmented reality glasses concept by Nokia. 1 Comment » “Disturb Me” is an interactive installation between human and his environment. No Comments » Nearness by Timo Arnell looks at nearness and interactive technology to create a series of events links by proximity. No Comments » Interesting take on building environments out of one material. No Comments » Great reel showing the student work from Robotic Ecologies Seminar 2008 taught by Jason Johnson. No Comments » Read full article » No Comments »

Tumblr Architecture With over 15 billion page views a month Tumblr has become an insanely popular blogging platform. Users may like Tumblr for its simplicity, its beauty, its strong focus on user experience, or its friendly and engaged community, but like it they do. Growing at over 30% a month has not been without challenges. Some reliability problems among them. One of the common patterns across successful startups is the perilous chasm crossing from startup to wildly successful startup. Tumblr started as a fairly typical large LAMP application. The theme at Tumblr is transition at massive scale. Site: Stats 500 million page views a day15B+ page views month~20 engineersPeak rate of ~40k requests per second1+ TB/day into Hadoop clusterMany TB/day into MySQL/HBase/Redis/MemcacheGrowing at 30% a month~1000 hardware nodes in productionBillions of page visits per month per engineerPosts are about 50GB a day. Software Hardware Architecture Old Tumblr New Tumblr Internal Firehose Team Structure

Rhino ++ Grasshopper – Plethora Project Plethora-Project.com is an initiative to accelerate computational literacy in the frame of architecture and design. It aligns with the "show me your screens" motto of the TopLap live-coding group attempting to get rid of Obscurantism in digital design. Directed by Jose Sanchez Contact me at : jomasan@gmail.com Bio: Jose Sanchez is an Architect / Programmer / Game Designer based in Los Angeles, California. installations | WeWasteTime | Page 8 Carl Scrase, Fractal Alchemy installation, at John Buckley Gallery, Melbourne, 2009. via art blart Like this: Like Loading... Superheros and Pop culture icons meet Modern design in Dimitris Polychroniadis “Superhero Fusion” Series. Photography by Michalis Dalanikas & Dimitris Polychroniadis. Installation of 8 computer controlled fans and a single piece of fabric, created by visual design studio WOW for Issey Miyake’s S/S 2012 ELTTOB TEP collection via spoon & tamago Tunnel-shaped structure created from 600 wooden fittings on the Teshima island, by artist Chiharu Shiota for Setouchi International Art Festival “100-Day Art and Sea Adventure” , Japan, 2010. A monumental wallpaper made from 88 thousand images of the sky above Amsterdam (taken from Luna Maurer’s sky-catcher project), created by Jonathan Puckey and Luna Maurer at the Museum De Paviljoens, 2007. Split Second installation by German artist Matthias Maenner, 2010. Foto by Florian Balze … by Leandro Elrich via lost at e minor

Responsive Architecture Title: WX Category: #materialbehaviour #programmable material Author: Jose Luis Garcia del Castillo, Christian Ervin, and Krista Palen, Harvard Graduate School of Design Year: 2013 Url: Description : WX is a numerically-controlled wax sculpture machine. Exhaustive material research with various types of wax and water mixtures at controlled temperatures and rates of mixing gave our team tremendous insight into the behavioral effects of these materials as they interact. The material behavior is dependent on the relative temperatures of the wax and the water. Additionally, the rate of descent of the tray lowering the wax sample into the water affects the resulting geometry: a slow rate of descent allows for the wax to disperse along the surface of the water, creating wider shapes, and a fast rate of descent makes for more narrow shapes.

MANIFESTO ARCHITECTURE RHINO: GRASSHOPPER DEFINITIONS - RHINO / GH This definition was developed for my final thesis project to generate a louver system based on functional requirements within the building. The performance was then tested in Ecotect. A large part of my thesis design involved invertible arena seating with many moving parts. I used Grasshopper as a means to develop the seating testing clearances, site lines, and many other variables. This definition looks at taking any curved surface, and generating weaving geometry across it. The parametric skyscraper uses Grasshopper to generate the entire structure. My favorite definition to date, this definition generates box designs based on real boxes I crafted in the wood shop while in Grad school This definition extrudes geometry based on their proximity to a polyline attractor. Using a definition created by paramod, I wanted to see if I could edit the definition so that different panels could be combined to create a seamless surface This was one of the first definitions from scratch I ever created.

archive.aec.at/showmode/prix/?id=47539#47539 Cube with Magic Ribbons is a computer-visual and synthesized-sound composition for live performance. The piece takes its title from a drawing by M.C. Escher, which is rich in contradictory perspectives, but it is also inspired by the wrapped spaces found in the two-dimensional graphics of early computer games such as Asteroids and Pac-Man. Simon Katan (UK) is an artist and coder with a background in composition who combines electronic music, live animation, interaction and social gaming. Inspirational Gallery #29 - Architecture In Artists Inspire Artist’s Inspirational Galleries, we present to you amazing & high quality artwork from incredible artists throughout the world. Today we have an amazing selection of architecture. So as always, enjoy & live inspired!