Learning Initiative 7 Things You Should Know About MOOCs 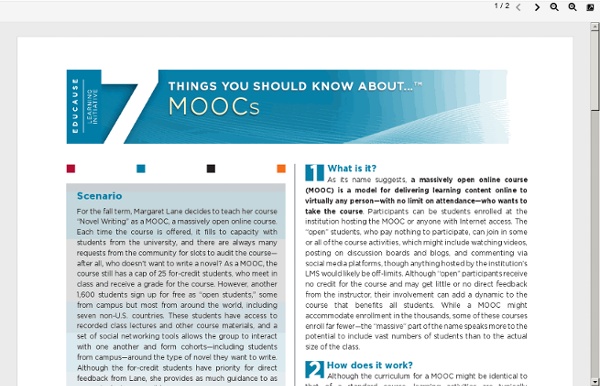 To MOOC or Not to MOOC - WorldWise MOOCs have become a media obsession. Why? In part because they are the continuation of a story that has been around since at least the 1990s and the first days of magazines like Wired and Fast Company. I’d like to think that since then we’ve learned something. After all, universities have produced a substantial body of research that argues that information technology is not an epochal economy-changing technology. These sources must induce at least some suspicion about the wider claims concerning MOOCs, or massive open online courses. Why this obsession with MOOCs? Second, because it taps into a vein of middle-class anger over tuition costs. Third, because in a time of austerity, nations are searching for ways of reducing higher-education spending, and MOOCs can look like a silver bullet, making it all so much easier to cut and still feel good about it. Whatever the motivation, the most appropriate advice might be to calm down. And there is a historical irony about all this, too.

What Makes a MOOC Massive? Responding to a LinkedIn Discussion. When people ask me what makes a MOOC 'massive' I respond in terms of the *capacity* of the MOOC rather than any absolute numbers. In particular, my focus is on the development of a network structure, as opposed to a group structure, to manage the course. In a network structure there isn't any central focus, for example, a central discussion. Additionally, my understanding is that for the course to be a *course* it has to be more than just a broadcast. So what is essential to a course being a *massive* open online course, therefore, is that it is not based in a particular environment, isn't characterized by its use of a single platform, but rather by the capacity of the technology supporting the course to enable and engage conversations and activities across multiple platforms. In the first connectivist MOOC, for example, we have 170 individual blogs created by course participants (in Change11 we had 306 feeds). Why Dunbar's number?

A Quick Guide To The History Of MOOCs This Is How Students Use School Websites 8.45K Views 0 Likes It's important to have a proper appearance online. So why are there so many unhelpful school websites out there? This infographic shares what students want. Why TED Talks Have Become So Popular 5.67K Views 0 Likes TED talks are useful and free ways to bring high-level thinking and through-provoking ideas into the classroom and your home.

MOOCs: The Myth Of Online Classrooms | INFO 203, Spring 2013 by Sandra Helsley, Ajeeta Dhole, Kate Rushton In The Myth of the Paperless Office, Sellen and Harper write, “For each limit, for each set of actions that paper prevents, there is a set of actions that it enables. In other words, each limitation is also an affordance.” MOOCs such as Coursera or Udacity provide open and (typically) free access to high-quality educational resources to anyone with a computer and an internet connection. However, analyses of MOOCs reveal many problems with the online format that may, in part, be attributed to their open-ended affordances. Aside from economics, the difference in completion rates between online and offline classes may be attributed in large part to the affordances of a physical classroom. The lack of physical presence also has implications for the quality of learning: in a traditional class, instructors may gauge the effectiveness of their teaching based on students’ facial expressions and body language.

HigherEdTECH 2013 Making MOOCs Matter: Assessing, Certifying and Credentialing Learning From Hype to Nuanced Promise: American Higher Education and the MOOC 3.0 Era | Cathy Sandeen Massive Open Online Courses, or MOOCs, splashed on the higher education scene in sensational fashion in the summer of 2012. When Coursera (a Silicon Valley start-up MOOC platform) enrolled its one millionth student, The New York Times took notice with a front page article, and the higher education trade press began covering the topic on a daily basis--often with multiple stories a day. Coursera and two other major MOOC platforms, Udacity and edX, were hailed as truly transformational, a potential cure-all for the problems of how to contain college costs and boost the number of Americans who earn college degrees. It's only been a year since MOOC-mania took hold, but already it's been a wild ride, a fast-changing evolution both in how MOOCs are viewed by the general public and the higher education community and in how the courses might best be applied to the needs of colleges and universities and the students they serve.

Top Ed-Tech Trends of 2012: MOOCs Part 5 of my Top Ed-Tech Trends of 2012 series The Year of the MOOC Massive Open Online Courses. MOOCs. And oh man, did we talk about it. In retrospect, it’s not surprising that 2012 was dominated by MOOCs as the trend started to really pick up in late 2011 with the huge enrollment in the three computer science courses that Stanford offered for free online during the Fall semester, along with the announcement of MITx in December. Who cares what Cormier thinks and predicts? January: Googler and Stanford professor (and professor for the university’s massive AI class) Sebastian Thrun announces he’s leaving Stanford to launch Udacity, his own online learning startup. February: MITx opens for enrollment. April: Stanford professors Andrew Ng and Daphne Koller (also involved with Stanford’s fall 2011 MOOCs) officially launch their online learning startup Coursera. May: June: July: August: September: October: The University of Texas system joins edX.Coursera strikes a deal with Antioch University.