Get popular free downloadable tools to use in the classroom 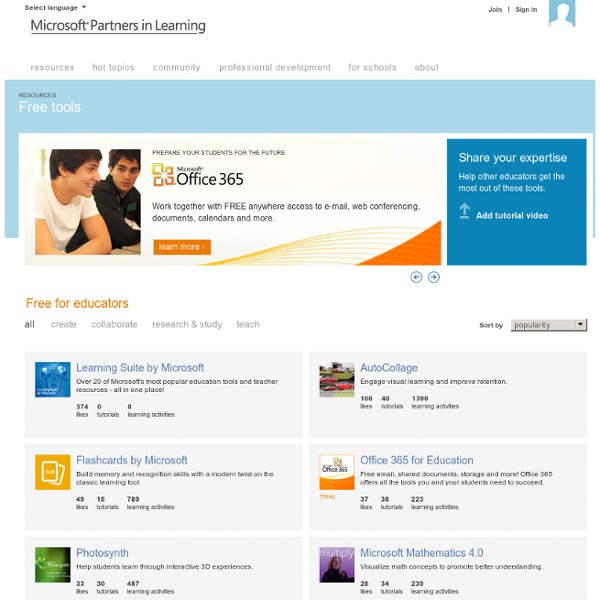 Windows Movie Maker The sights, sounds and action of a movie are a great way grab your students' attention and bring subjects to life. But who has time to teach and make movie magic? You do - with Windows Movie Maker. In just minutes, you can turn photos and video clips on any subject into interesting movies with special effects, sounds, and captions. News - Ribbon Hero 2 You've tried games that test your card playing, your imaginary farming skills, and your ability to hurl small birds. Finally there's a game that will make you better at your job. Do you feel like you're using Word, Excel, PowerPoint, and OneNote the same way version after version, or have you avoided using one of these apps because you don't know how?

The 27 Characteristics of A 21st Century Teacher "21st Century Educator" is probably the most popular buzzword in today's education. There is a growing and heated debate whether or not to label educators as 21st century and each camp has its own concept and arguments, however, for me personally I see teaching in 21st century as having undergone a paradigmatic shift. This is basically due to the emerging of the " social web" and the huge embrace of technology and particularly the mobile gadgetry in our classrooms. It would be unfair to ignore these huge transformations and their impact on education. Therefore, and as a result of these changes teachers now are required to have digital skills that were not called for before.

index "Use your voice" Jott.com In 2006 Jott emerged as a leader in mobile voice-to-text applications. Now, nearly two years after Jott's acquisition and a successful integration into Nuance, we are officially ending the Jott service on May 3rd, 2011.This may seem counter-intuitive – success leading to a shutdown.But while it is an ending of sorts, the reality is that the technology, service, talent and imagination of Jott will continue on as part of a far broader set of services. The Jott team, vision and technologies are an integral part of a global business which includes partners such as AT&T, Rogers, Bell Canada, Vodafone, Cisco, Vonage, and many others. The dramatic expansion of Nuance's voice-to-text services is clear evidence that consumers will respond to innovations that carriers offer, and with that in mind, we will focus our voice-to-text service investments on carrier and enterprise distribution, and no longer on Jott.com.

Kodu Kodu is a new visual programming language made specifically for creating games. It is designed to be accessible for children and enjoyable for anyone. The programming environment runs on the Xbox, allowing rapid design iteration using only a game controller for input. Programming as a Creative Medium The core of the Kodu project is the programming user interface. The language is simple and entirely icon-based. Xpedition Hall Interactive Archive: Xpedition Hall Welcome to the Interactive “Museum” That Takes You on Geography Journeys See other versions of this page: About Xpedition Hall VideoANT A recent request came up for access to the raw text that gets entered into a projects annotations. I have developed a number of primitive tools over the past year that I have been using for internal purposes. In light of this request I am releasing these pages to the public for your own consumption as they cannot be used to edit your content but are simple ways to gain access to the content you develop. Keep in mind they are nothing fancy aesthetically, but are quite functional in nature :) I recommend that faculty utilize this first page to extract the raw data entered into the system as a back-up should it be necessary.

AutoCollage 2008 What is AutoCollage? Photo collages celebrate important events and themes in our lives. Pick a folder, press a button, and in a few minutes AutoCollage presents you with a unique memento to print or email to your family and friends. AutoCollage Touch 2009 Support 5 Ways to Add Interactive Elements to Your Videos Over the last few days I've featured a couple of free tools for adding interactive elements to your videos. In the last year I've reviewed a few other services and methods for doing the same thing. This is a round-up of the ways that you can add interactive elements to your videos. The first four tools could be used by students to create a series of choose your own adventure videos.

Kathy Schrock's Guide to Everything - Bloomin' Apps This page gathers all of the Bloomin' Apps projects in one place.Each image has clickable hotspots and includes suggestions for iPad, Android, Google and online tools and applications to support each of the levels of Bloom's Revised Taxonomy.I have created a page to allow you to share your favorite online tool, iOS, or Android app with others. Cogs of the Cognitive Processes I began to think about the triangular shape of Bloom's Taxonomy and realized I thought of it a bit differently.Since the cognitive processes are meant to be used when necessary, and any learner goes in and out of the each level as they acquire new content and turn it into knowledge, I created a different type of image that showcased my thoughts about Bloom's more meaningfully.Here is my visual which showcases the interlocking nature of the cognitive processes or, simply, the "Cogs of the Cognitive Processes". IPAD APPS TO SUPPORT BLOOM'S REVISED TAXONOMYassembled by Kathy Schrock​ Bloom's and SAMR: My thoughts

Media Subtitler Softwareselect language » DivXLand Media Subtitler is the best choice for creating, editing and fixing external subtitle files for all video types fast and easily. Freeware and multilanguage, creating and editing subtitles was never so fun and easy.