Change A Habit In Three Steps With This Flowchart 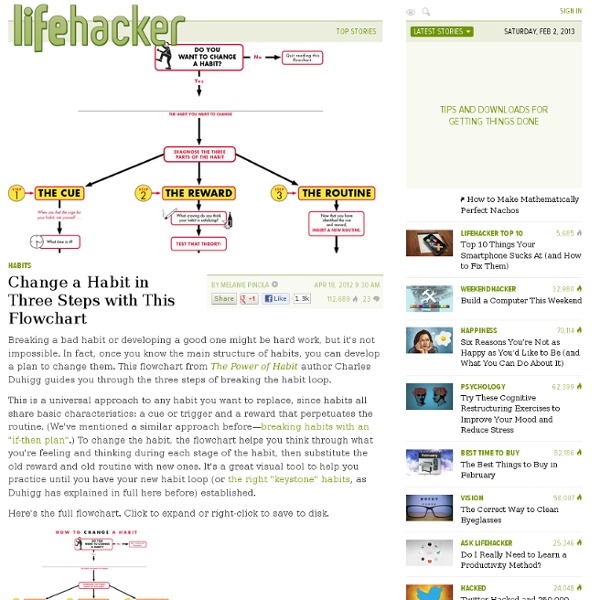 I'm going to promote your comment by way of calling you out for being a bullshitter extraordinaire. Nicotine is one of the most famously addictive substances known. There are many cases reported of people who were told they had cancer, were on drugs and treatment to help them fight cancer, and yet could not stop smoking tobacco. The BBC had a documentary about this phenomenon at least 15 years ago. If you claim that you simply stopped your addiction to tobacco and 'it was easy', I can only suspect you to be either a liar or someone with above-human psychological abilities. Next, you denounce anyone who can't lose weight as being 'weak, lazy' and lacking motivation. You're a troll, right? Fuck you. I do know many people who have just quit tobacco, even after many many years. The simple fact is some people can do it, others cannot. Plenty of people quit that way.

The Power of Habit Identify the cost of craving and the rest will follow "“This is how new habits are created: by putting together a cue, a routine and a reward, and then cultivating a craving that drives the loop.”" The key element is the craving. Marketers at Proctor & Gamble studied videos of people making their beds. Why do you brush your teeth every day? What cravings can you create to change habits? Habits can be learned and unlearned in four steps "“Habits – even once they are rooted in our minds – aren’t destiny. While Duhigg admits that change might not be fast and it certainly isn’t easy, he believes that with time and effort, almost any habit can be reshaped. He offers 4 steps to do that: 1) Identify the routine. 2) Experiment with different rewards. 3) Isolate the cue. 4) Have a plan. Habits create our destiny. You have the ability and the responsibility to reshape your life and world. Rebuild your life one habit at a time!

How To Create A Habit In 15 Days Most of our life is lived by habits. We learn how to ride a bike, how to drive a car, we even learn how to speak and read. And then we do all of these with minimum effort and implication. Basically, all of these are habits. They allow us to focus on other things while pushing the routine into background. As any other things in our life, habits are just tools we use in our joyful exploration of life. In today’s post I’ll share some of my experiences with habit creation using one of my favorite activities: journaling. Why Do You Need A New Habit? Well, let’s say you want a new habit in order to: write on your blog more oftenupdate your twitter status dailywrite each day a page from your new bookstart a fitness programstart a new eating habit or dietlearn a new language All these new activities are made by some repetitive tasks, a set of moves you have to do daily in order to get some positive results. How To Create A Habit In 15 Days All you need for that is a journal. Day 1: Name your habit

The Habit Change Worksheet Yesterday we talked about habit change and some ways to change a bad habit into a good one. We found that the golden rule of habit change was to keep the old cue, and the old reward, but change the routine. I decided to come up with a habit change worksheet, to list out a bad habit and explore what the cues are and also the rewards. once we have those listed we can change the routine and hopefully the habit. For an example, I chose a habit I used to have when Starbucks first opened in my area. Everyday I would drive by Starbucks on my way to work, and invariably I would pull in and order a latte and a treat to go. This was fine until I realized that the latte was 400 calories and the treat an additional 400 calories. As you can see, the top area has a place to list our current routine and also list out possible cues and rewards, while the middle has a place for our reward experiments. Instructions: 1. 2. 3. I found that I was hungry and thirsty. Habit Change Worksheet Happy Habit Change!

The Prophet of Habit-Forming Technology A middle-aged woman sits before a computer screen on the 11th floor of Expedia’s glass-clad headquarters in Seattle. Two electrodes are taped to her brow just above her left eye, two more on her left cheek. A one-way mirror reflects her face as she responds to requests issuing from a speaker mounted in the ceiling. Behind the glass, a researcher directs the test subject as a half-dozen designers, engineers, and executives look on in rapt silence. Though she has not been told, ­Shannon has been brought in to test a new Expedia feature, known as Scratchpad, that the online travel broker hopes will bring travelers back to the site daily between the time they start planning a trip and the day they make a purchase. The first part of Shannon’s test is simply finding the Scratchpad button on the Expedia.com page. Forging new habits has become an obsession among technology companies. The rise of mobile computing has intensified that imperative. Illustration of Nir Eyal’s habit-forming “hook.”

The 5 Triggers That Make New Habits Stick In his best-selling book, The Power of Habit (audiobook), author Charles Duhigg explains a simple three-step process that all habits follow. This cycle, known as The Habit Loop, says that each habit consists of… The Trigger: the event that starts the habit.The Routine: the behavior that you perform, the habit itself.The Reward: the benefit that is associated with the behavior. The image below shows how these three factors work together to build new habits. [1] Each phase of the loop is important for building new habits, but today I’d like to discuss the first factor: habit triggers. There are five primary ways that a new habit can be triggered. Trigger 1: Time Time is perhaps the most common way to trigger a new habit. There are also less commonly recognized ways that time triggers our behavior. If these patterns are bad habits, then you may want to take stock of how you feel at this time of day. How I use it: Time-based triggers can also be used to stick with routines over and over again.

Cumpulsive behavior in companies untitled How to Break a Bad Habit Moving from wanting to change to actually doing so can be a challenge because the repetition of any pattern of behavior establishes neural circuits in the brain. Habits generate biochemical and physiological changes that perpetuate behavior. However, it is possible to break a habit when you address the emotional and physical aspects behind it. Here is a powerful six-step process that can help you succeed: Step One: Identify the Obstacle To relinquish an unwanted habit, you have to acknowledge it by bringing it into conscious awareness. Step Two: Present Moment Awareness When you engage in the habit, do it with your full attention. Step Three: Envision the New Close your eyes, take a deep breath, and envision the change you want to make. Step Four: Clear the Space Set a date for ending the habit. A few suggestions for your weekend retreat: Step Five: Filling the Void Habits fill deep-seated needs, so when you drop an unwanted behavior, you need to replace it with a nourishing one.

A Brief Guide to Quitting a Bad Habit By Leo Babauta There aren’t many of us who don’t have some bad habit we’d like to quit: smoking, sweets, shopping, nail-biting, porn, excessive checking of phones or social media, other distractions … The problem is that we think we don’t have the willpower, faced with past evidence of failure after failure when we’ve tried to quit before. We don’t think we can quit, so we don’t even try. Or if we do try, we give ourselves an “out,” and don’t fully commit ourselves. Let me tell you this: quitting a bad habit takes everything you’ve got. It’s hard, but doable — if you put your entire being into it. But if you’re ready to finally quit something, here’s a short guide to doing just that. 10-Steps — Just as Good as the 12-Step Folk You don’t actually need to follow every single one of these steps to quit a habit, but the more of them you do, the higher your chances. Have a big motivation. I’m not saying this is an easy method, but many people have failed because they ignored the ideas here.

Eating sweets forms memories that may control eating habits -- ScienceDaily Eating sweet foods causes the brain to form a memory of a meal, according to researchers at Georgia State University, Georgia Regents University and Charlie Norwood VA Medical Center. The findings, published online in the journal Hippocampus, show that neurons in the dorsal hippocampus, the part of the brain that is critical for episodic memory, are activated by consuming sweets. Episodic memory is the memory of autobiographical events experienced at a particular time and place. In the study, a meal consisting of a sweetened solution, either sucrose or saccharin, significantly increased the expression of the synaptic plasticity marker called activity-regulated cytoskeleton-associated protein (Arc) in dorsal hippocampal neurons in rats. Synaptic plasticity is a process that is necessary for making memories. "We think that episodic memory can be used to control eating behavior," said Marise Parent, professor in the Neuroscience Institute at Georgia State.

6 Things You Can Do When You Lack Discipline Post written by Leo Babauta. Follow me on Twitter. One of the biggest problems people face is the lack of discipline — they have goals or habits they want to achieve, but lack that discipline needed to stick with it. Then we beat ourselves up about it. We feel crappy because we can’t stick with it. And that leads to more failure, because we’re forming a mindset that we don’t have the necessary discipline. Here’s what to do when you face a situation like this: 1. 2. 3. 4. 5. 6. —If you liked this article, please share it on del.icio.us, StumbleUpon or Digg.