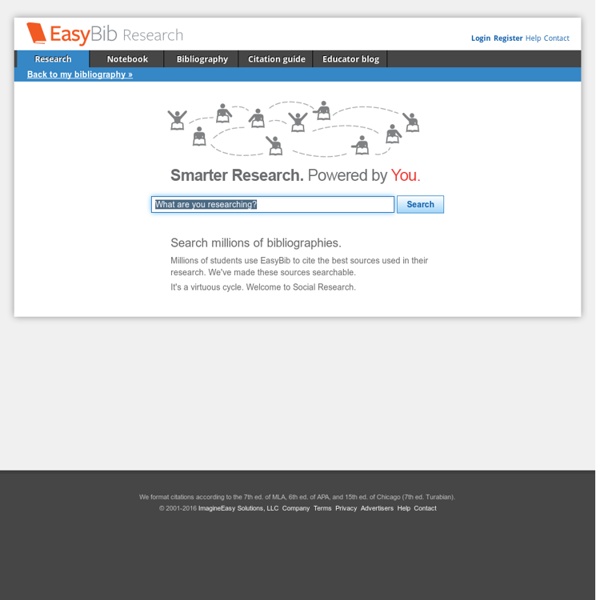 6 of The Best Web Tools for Organizing and Managing Citations, References and Bibliographies April 1, 2015 One of the onerous parts in essay and academic writing is the bibliography section. Managing, organizing and citing references can sometimes be a real challenge especially if you don't keep track of what and who you cite. The last thing you would want after a strenuous writing task is a messy bibliography with one reference missing page numbers the other needs publication date or, worse of all, having to go back to your sources to check for the source of that quotation you included in your conclusion. If you find yourself constantly grappling with problems such as these, the web tools below are absolutely something you might need to consider. These are some of the best applications for organizing, managing, and publishing bibliographies, citations and references.

Mayan hieroglyphic writing Mayan hieroglyphic writing, system of writing used by the Maya people of Mesoamerica until about the end of the 17th century, 200 years after the Spanish conquest of Mexico. (With the 21st-century discovery of the Mayan site of San Bartolo in Guatemala came evidence of Mayan writing that pushed back its date of origin to at least 300 or 200 bc.) It was the only true writing system developed in the pre-Columbian Americas. Mayan inscriptions are found on stelae (standing stone slabs), stone lintels, sculpture, and pottery, as well as on the few surviving Mayan books, or codices.

HISTORY OF THE MAYA The Maya then and now: from 1500 BC The Maya, occupying the triangle of land framed by the Gulf of Mexico, the Caribbean Sea and the Pacific Ocean, have the longest identifiable history of any American people. Social customs, language and physical characteristics (such as unusually round heads) suggest an unbroken link between the American Indians living in the region today and their predecessors 3500 years ago. Since much of the area is jungle (which preserves monuments for the archaeologists by concealing them from others), their culture is also better known than most. Maya temples, carvings and inscriptions have survived in considerable number. How Google Docs' research tool removes drudgery from reports and presentations You’re frantically racing toward a deadline to complete a multi-page report or slideshow presentation, but research is slowing you down. Not tracking down the information so much as the constant bouncing between your work document and web browser, and cycling through the confusing morass of open tabs to find that webpage or image you need. If you use Google’s free office suite, there’s an easier way—a built in research tool that lets you search for the information you need and easily add it to the Google Doc or Google Slide you’re working on without having to leave the page. Here’s how to get started. Access the research tool Google offers three ways to access the research tool pane.

Unearthing the Mayan Creation Myth Archaeologists who have uncovered two massive carved stucco panels in the Mirador Basin of Gua­temala’s northern rain forest say they are the earliest known representation of the Mayan creation myth, predating other such artifacts by a millennium. According to the researchers, the panels—26 feet long and 20 feet high, with images of monsters, gods, and swimming heroes—date to 300 B.C. They formed the sides of a channel that carried rainwater into a complex system of stepped pools, where it was stored for drinking and agriculture. Idaho State University archaeologist Richard Hansen, who is directing the ongoing excavation, says that the panels’ carved images depict an important scene from the Popol Vuh, a text of the Mayan myth that was first recorded in the 16th century.

History for Kids: Aztecs, Maya, and Inca Back to History The three most dominant and advanced civilizations that developed in the Americas prior to the arrival of the Europeans were the Aztecs, the Maya, and the Inca. Map of Aztec, Mayan, and Incan Civilizations by Ducksters Aztecs The Aztec Empire was located in central Mexico. Research Strategies - AAA Shared Resource Guide - LibGuides at Indiana University-Purdue University Indianapolis Before you start entering any search terms, spend a few minutes trying to think of as many relevant terms and combinations of terms as you can. This will help you to avoid getting stuck in a rut with the first terms that come to mind. If you need help in coming up with terms, you may want to try the "Thesaurus" or "Subject Headings" features in the database you've chosen. Check out the "Help" or "Search Tips" to learn some of the search features specific to that database. Most databases provide similar features, but the methods may vary. Some common tricks:

Intense droughts blamed for Mayan collapse - 13 March 2003 The Mayan civilisation of Central America collapsed following a series of intense droughts, suggests the most detailed climatic study to date. The sophisticated society of the Maya centred on large cities on the Yucatán peninsula, now part of Mexico. Their population peaked at 15 million in the 8th century, but the civilisation largely collapsed during the 9th century for reasons that have remained unclear to this day. Maya numerals Maya numerals Numbers above 19[edit] Numbers after 19 were written vertically in powers of twenty. How to Read a Journal Article Journal articles can be challenging to read, but most contain many of the same components. Once you understand the structure of each article, understanding the content is much simpler. Journal articles normally contain the following parts. For each part, try to identify the following: Abstract

EasyBib is an intuitive information literacy platform that provides citation, note taking, and research tools that are easy-to-use and educational. EasyBib is not only accurate, fast, and comprehensive, but helps educators teach and students learn how to become effective and organized researchers. EasyBib is a service of Imagine Easy Solutions, a tiny company that makes big products. Learn more about us here. by mshaddd Feb 17