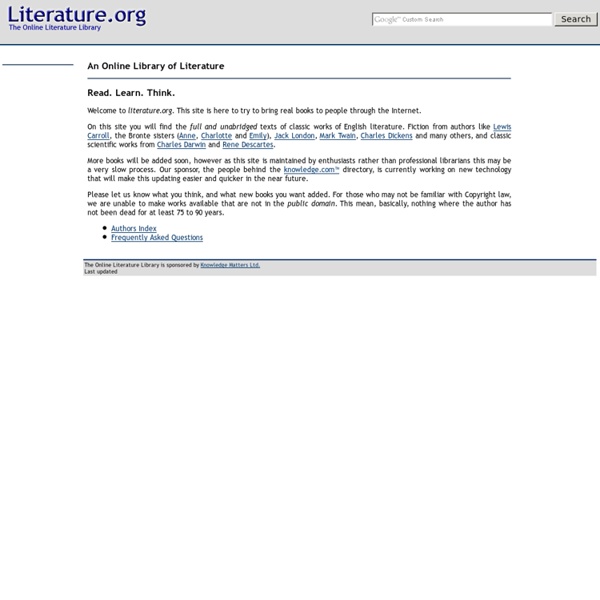 Free ebooks by Project Gutenberg On August 26 2020, the Project Gutenberg website underwent some major changes. These changes had been previewed since early 2020, and visitors to the old site were invited to try the new site, including giving input via a brief survey. The old site is no longer available. If you found yourself on this page unexpectedly, it is because an old page was redirected here. Please use the navigation menus at the top of the page to find what you were looking for. All of the functionality, and most of the content, from the old site is still here - but in a different location.

The Online Books Page: Search Examples: Entering austen, jane in the Author field finds books by Jane Austen. Entering Baum in the Author field and and oz in the Title field finds L. Frank Baum's Oz books. Proyecto Filosofía en español / www.filosofia.org Colby - THE MACGUIRE AFFAIR By Gerard Colby In the summer of 1934 Gerald MacGuire, a lawyer in the Morgan brokerage office of Grayson M. -P. Murphy and an official of the American Legion, visited General Smedley Butler at his home in Newton Square, Pennsylvania. Butler, former Commandant of the Marine Corps and holder of two Congressional medals of honor, had ended his 33-year career in the Marines three years earlier amid a storm of diplomatic protest over his public description of Italian dictator Benito Mussolini as "a mad dog about to break loose in Europe."

Invitation to World Literature Greek, by Euripides, first performed in 405 BCE The passionate loves and longings, hopes and fears of every culture live on forever in their stories. Here is your invitation to literature from around the world and across time. Sumerian, 2600 BCE and older Turkish, by Orhan Pamuk, 2000 Greek, by Homer, ca. eighth century BCE Greek, by Euripides, first performed in 405 BCE Sanskrit, first century CE Japanese, by Murasaki Shikibu, ca. 1014 Chinese, by Wu Ch'êng-ên, ca. 1580 Quiché-Mayan, written in the Roman alphabet ca. 1550s French, by Voltaire, 1759 English, by Chinua Achebe, 1959 Spanish, by Gabriel García Márquez, 1967 English, by Arundhati Roy, 1998

Read book online: Literature books,novels,short stories,fiction,non-fiction, poems,essays,plays,Pulitzer prize, Nobel prize Free Public Domain Books from the Classic Literature Library The Online Books Page Farming to blame for our shrinking size and brains (PhysOrg.com) -- At Britain's Royal Society, Dr. Marta Lahr from Cambridge University's Leverhulme Centre for Human Evolutionary Studies presented her findings that the height and brain size of modern-day humans is shrinking. Looking at human fossil evidence for the past 200,000 years, Lahr looked at the size and structure of the bones and skulls found across Europe, Africa and Asia. What they discovered was that the largest Homo sapiens lived 20,000 to 30,000 years ago with an average weight between 176 and 188 pounds and a brain size of 1,500 cubic centimeters.

Library As of July 1, 2013 ThinkQuest has been discontinued. We would like to thank everyone for being a part of the ThinkQuest global community: Students - For your limitless creativity and innovation, which inspires us all. Teachers - For your passion in guiding students on their quest. Featured: Lindow Manl at the Mummy Tombs Maybe Andy Mould had a special knack that most people don't have. Or maybe it was just a coincidence. But in 1983 and then again in 1984, he found human remains in an English peat bog known as Lindow Moss. The first time, he had found the head (mostly a skull with little skin or brain remaining) of a woman.

"On this site you will find the full and unabridged texts of classic works of English literature. Fiction from authors like Lewis Carroll, the Bronte sisters (Anne, Charlotte and Emily), Jack London, Mark Twain, Charles Dickens and many others, and classic scientific works from Charles Darwin and Rene Descartes." by macopa May 24