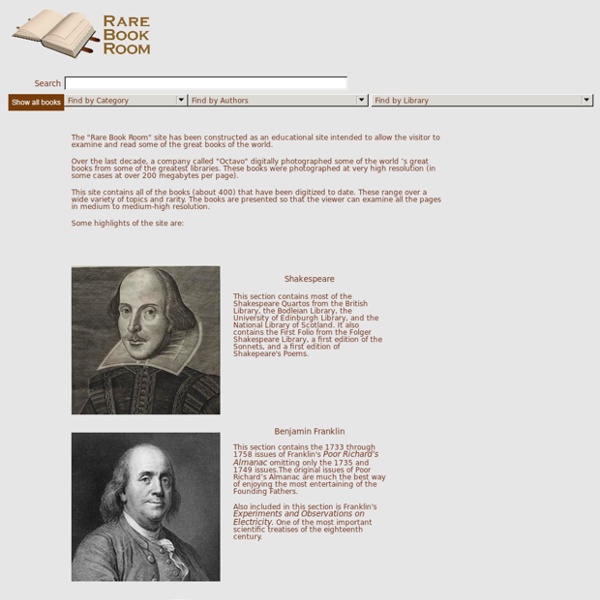 Primary Sources: Overview of Collections One of the nation’s top collections of rare law books is housed in the Paskus-Danziger Rare Book Room of the Lillian Goldman Library at the Yale Law School. The collection is particularly strong in Anglo-American common law materials, including case reports, digests, statutes, trials, treatises, and popular works on the law. Other strengths include Roman and canon law, international law (especially the works of Hugo Grotius and Samuel Pufendorf), and early law books from most European countries.

My Rocketbook Highly stylized and interactive – created for your iPhone, iPad, iPod touch or DVD player – Rocketbook Study Guides feature chapter summaries, in-depth analyses and pop quizzes that break down and explain classic works of literature. They are the ideal companions for the modern student's reading experience. "These are study guides like you've never seen before. Designed especially for teen audiences, graphics, animation, live-action footage, and music make the presentation very engaging." — cathyduffyreviews.com "I have always been extremely impressed with the RocketBook Series. Brave New World by Aldous Huxley Chapter One A SQUAT grey building of only thirty-four stories. Over the main entrance the words, CENTRAL LONDON HATCHERY AND CONDITIONING CENTRE, and, in a shield, the World State's motto, COMMUNITY, IDENTITY, STABILITY. The enormous room on the ground floor faced towards the north. Cold for all the summer beyond the panes, for all the tropical heat of the room itself, a harsh thin light glared through the windows, hungrily seeking some draped lay figure, some pallid shape of academic goose-flesh, but finding only the glass and nickel and bleakly shining porcelain of a laboratory.

UVa Library Digital Collections: Finding and Using Digital Resources Exhibitions The Library's new exhibitions interface features dozens of exhibitions from the mid 1990s to the present. Check back as new exhibitions are added and past exhibitions are updated and republished. Spotlight: James Madison: Unsung Hero of the UniversityOvershadowed by the tremendous contributions made by Thomas Jefferson to establish the University, Madison's role is often overlooked, although he worked closely with Jefferson to realize his vision for an institution of higher education to prepare students for their responsibilities as citizens of the new Republic.

The Libri of Aleister Crowley Aleister Crowley (Oct. 12, 1875–Dec. 1, 1947) – however one judges him – was a fascinating man who lived an amazing life. He is best known as being an infamous occultist and the scribe of The Book of the Law, which introduced Thelema to the world. Crowley was an influential member in several occult organizations, including the Golden Dawn, the A∴A∴, and Ordo Templi Orientis. He was a prolific writer and poet, a world traveler, mountaineer, chess master, artist, yogi, social provocateur, drug addict and sexual libertine. The press loved to demonize him and dubbed Crowley “The wickedest man in the world.” — From “Aleister Crowley” on Thelemapedia

National Art Inventories What are the Inventories? The Inventories of American Painting and Sculpture document more than 400,000 artworks in public and private collections worldwide. The Inventory of American Paintings includes works by artists who were active in America by 1914. The Inventory of American Sculpture has no cut-off date and includes works from the colonial era through contemporary times. These online databases are supplemented by a photographic collection of over 80,000 images. Shakespeare's Plays Shakespeare's Plays Before the publication of the First Folio in 1623, nineteen of the thirty-seven plays in Shakespeare's canon had appeared in quarto format. With the exception of Othello (1622), all of the quartos were published prior to the date of Shakespeare's retirement from the theatre in about 1611. It is unlikely that Shakespeare was involved directly with the printing of any of his plays, although it should be noted that two of his poems, Venus and Adonis and The Rape of Lucrece were almost certainly printed under his direct supervision. Here you will find the complete text of Shakespeare's plays, based primarily on the First Folio, and a variety of helpful resources, including extensive explanatory notes, character analysis, source information, and articles and book excerpts on a wide range of topics unique to each drama.