The best 100 opening lines from books 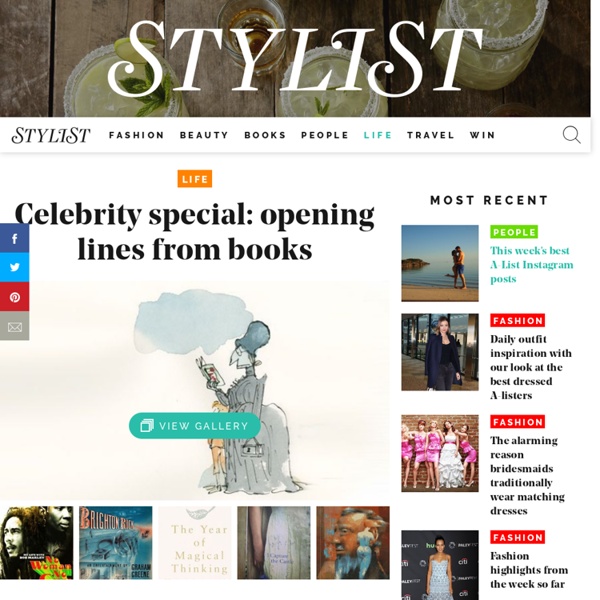 Related:  Writing In General • Quotes,texts • literature • How To • Literature

Story Starters for Creative Writing Exercises One-line story starters are great for group writing exercises. They have enough conflict to start the writing flow, but are open-ended to allow each writer to follow his or her own direction. Individual writers can use them on a regular basis for “practice writing,” following Natalie Goldberg’s suggestions in Writing Down the Bones.

When we were building Flickr, we worked very hard.... When we were building Flickr, we worked very hard. We worked all waking hours, we didn’t stop. My Hunch cofounder Chris Dixon and I were talking about how hard we worked on our first startups, his being Site Advisor, acquired by McAfee — 14-18 hours a day. We agreed that a lot of what we then considered “working hard” was actually “freaking out”. Freaking out included panicking, working on things just to be working on something, not knowing what we were doing, fearing failure, worrying about things we needn’t have worried about, thinking about fund raising rather than product building, building too many features, getting distracted by competitors, being at the office since just being there seemed productive even if it wasn’t — and other time-consuming activities.

online shakespeare course Marjorie Garber, PhD, William R. Kenan Jr. Professor of English and American Literature and Language and of Visual and Environmental Studies, Harvard University How To Write A Novel Using The Snowflake Method Writing a novel is easy. Writing a good novel is hard. That’s just life. If it were easy, we’d all be writing best-selling, prize-winning fiction. Frankly, there are a thousand different people out there who can tell you how to write a novel.

10 Wonders of the World You Don’t Know Our World While most of these wonders will be known to a few people, they are, on the whole, not as well known as the famous “seven wonders”. Despite that, each has a reason for being considered wonderful and deserves its spot on this list. How to Write in Deep POV + get inside the mind of your character photo cred: © Paolo Imbag via Unsplash This post is part of the HOW TO WRITE A STORY guide series. Have you ever read a story where you feel completely one with the point of view character? It’s as if you are that person. You are living their life, pursuing their journey. You even forget that you are reading a book and that an author lives behind every word.

Jazzyraes ramblings. & The greatest irony of life is loving the right... The greatest irony of life is loving the right person at the wrong time, having the wrong person when the time is right and finding out you love someone after that person walks out from your life. Sometimes you think you’re already over a person but when you see them smile at you, you’ll suddenly realize that you’re just pretending to be over them just to ease the pain of knowing that they will never be yours again. For some, they think that letting go is one way of expressing how much you love the person. Most relationships tend to fail not because the absence of love; love is always present. It’s just that one was being loved too much and the other was being loved too little. As we all know, the heart is the center of the body, but it beats on the left.

writing character profiles Enter your e-mail to get the e-book for FREE. We'll also keep you informed about interesting website news. "I have searched the web and used different worksheets, but none have come close to your worksheets and descriptions of (what to do and what not to do). La Mer - NinWiki From NinWiki The lyrics are in Creole French. It is one of the many NIN songs that includes the phrase "Nothing Can Stop Me Now," and one of the few to include a vocalist other than Trent Reznor.

45 ways to avoid using the word 'very' Three Telling Quotes About 'Very' Substitute ‘damn’ every time you’re inclined to write ‘very;’ your editor will delete it and the writing will be just as it should be. ~Mark Twain'Very' is the most useless word in the English language and can always come out. More than useless, it is treacherous because it invariably weakens what it is intended to strengthen. ~Florence KingSo avoid using the word ‘very’ because it’s lazy. A man is not very tired, he is exhausted.

Children Quotes, Sayings about Kids We worry about what a child will become tomorrow, yet we forget that he is someone today. ~Stacia Tauscher You can learn many things from children. How much patience you have, for instance. funny books It's a dreary day, so I thought I'd indulge myself and come up with a list of my favorite comedies. A caveat, however: this is not a fancy English-professor-y list of the finest, most exquisitely crafted, most erudite or intellectually sophisticated works on paper in the language. This is a list of the books that make me laugh until my mascara starts to run. These are books to read over your first cup of coffee or just before you go to sleep . Remember: a day you've laughed is day you haven't wasted--even if you didn't get out of bed.

W. H. Auden Wystan Hugh Auden (/ˈwɪstən ˈhjuː ˈɔːdən/;[1] 21 February 1907 – 29 September 1973), who published as W. H. Auden, was an Anglo-American poet,[2][3] born in England, later an American citizen, and is regarded by many critics as one of the greatest writers of the 20th century.[4] His work is noted for its stylistic and technical achievement, its engagement with moral and political issues, and its variety in tone, form and content.[5][6] The central themes of his poetry are love, politics and citizenship, religion and morals, and the relationship between unique human beings and the anonymous, impersonal world of nature. Auden grew up in and near Birmingham in a professional middle-class family and read English literature at Christ Church, Oxford. His early poems from the late 1920s and early 1930s, written in an intense and dramatic tone and in a style that alternated between telegraphic modern and fluent traditional, established his reputation as a left-wing political poet and prophet.

30 Incorrectly Used Words That Can Make You Look Bad While I like to think I know a little about business writing, I often fall into a few word traps. For example, "who" and "whom." I rarely use "whom" when I should. Even when spell check suggests "whom," I think it sounds pretentious.