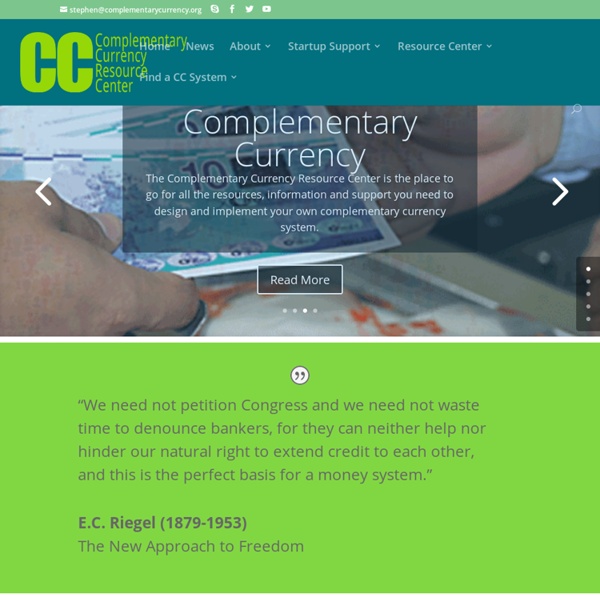 LETS Forum :: LETS in Cornwall and the SW IJCCR | International Journal of Community Currency Research Local currencies cash in on recession -- latimes.com PITTSBORO, N.C. — The stimulus for this mill town turned artist's colony arrived in the form of green bills bearing sketches of herons, turtles and trees. A few dozen local businesses banded together this spring to distribute the Plenty -- a local currency intended to replace the dollar. Now 15,000 Plenties are in circulation here, used everywhere from the organic food co-op to the feed store to, starting this month, the Piggly Wiggly supermarket. Last popularized during the Great Depression, scrip, or locally created stand-ins for U.S. currency, is making a comeback. "The Plenty is not going to get siphoned off to Wall Street, or Washington, or make a stop in Bentonville on its way to China," said B.J. Over the last two decades, a few communities have created their own cash in an effort to preserve local ties or businesses. The idea caught on fast, and other taverns agreed to help back the currency. "It's like a wink or a secret handshake," Belanger said. Thus Mesa Bucks were born.

Welkom bij Torekes! | Torekes The Soul of Money Institute: Transforming Your Relationship With Money Constitutional Financial Services - How To Use Silver Liberty's, Pre-1965 Coin and Gold Eagle's as Money Communities print their own currency to keep cash flowing By Marisol Bello, USA TODAY A small but growing number of cash-strapped communities are printing their own money. Borrowing from a Depression-era idea, they are aiming to help consumers make ends meet and support struggling local businesses. The systems generally work like this: Businesses and individuals form a network to print currency. Shoppers buy it at a discount — say, 95 cents for $1 value — and spend the full value at stores that accept the currency. Workers with dwindling wages are paying for groceries, yoga classes and fuel with Detroit Cheers, Ithaca Hours in New York, Plenty in North Carolina or BerkShares in Massachusetts. Ed Collom, a University of Southern Maine sociologist who has studied local currencies, says they encourage people to buy locally. "We wanted to make new options available," says Jackie Smith of South Bend, Ind., who is working to launch a local currency. "We print the real thing," she says. The IRS gets its share.

Bitcoin - P2P digital currency Local Currencies Grow During Economic Recession The gentle mountain slopes of New England isolate the Berkshires, creating a peaceful remoteness in this southern Massachusetts region. As a result, independent thinkers have thrived here. Herman Melville penned Moby Dick; Norman Rockwell etched paintings of American life; W. Today, the Berkshires is giving rise to a new wave of free thinking. Since the currency's launch two years ago, five local banks have printed more than 2 million paper notes. The Berkshires is not alone. Witt is now fielding calls from around the world, she said, especially from the United States and United Kingdom. "In the last four years, there has been a renewed interest in local economy, local production," said Witt, executive director of the E. Complementary forms of currency are nothing new, and they frequently appear when mainstream financial systems are in distress. The currencies take on various forms. In Switzerland, the WIR (the German word for "we") functions as a mutual credit system. von Raivo Pommer

Public sector innovation - Industrial innovation - Enterprise and Industry The public sector plays a key economic role as regulator, service provider and employer. It accounts for more than 25% of total employment and a significant share of economic activity in the EU Member States. An efficient and productive public sector can be a strong driver of economic growth through its support for and governance of the private sector. At a time where governments face the challenge to ensure financial consolidation while fostering growth, competitiveness and employment, there is a strong justification for efficiency gains, better governance, faster delivery and more user involvement in public sector. First European Public Sector Innovation Scoreboard published! European Public Sector Innovation Scoreboard 2013 What are the key results? The key results show that the public sector in Europe innovates but it faces still a number of obstacles. This report [190 KB] is also available.

RECOMMENDATIONS AND LINKS £Index £ Members of BAMR recognise the difficulty many people have in getting a full understanding of our message regarding both what is wrong and how it can be rectified. There are a number of reasons for this. BAMR is not exposing a recently engineered fraud, but a fraudulent practice that has been part of the status quo for over three hundred years and has been manipulated and exploited in the latter half of this century to a degree that threatens mankinds very survival. Most people have been successfully led to believe that the monetary system is so highly complex that only the "experts" can understand it and therefore they tend to shy away from the subject believing they will never understand it. It is difficult to believe that such a gargantuan fraud should have been going on under our noses for so long without exposure. To understand why "they" haven't and are unlikely (without our backing or coercion) to do anything about it one needs to recognise the power of money. Links:

Introduction - Life Currency Cooperative Exchange Have you ever wondered why, when millions of people have been working for positive change for so many years, the world is still in such a mess? Does it seem like no matter how much good work is done, the destructive juggernaut of modern culture steams ahead regardless, intent on destroying the planet and the quality of people's lives? There is an invisible but powerful underlying structure in our lives and our culture, one which supports and rewards antisocial behavior, the destruction of the environment and our communities, and the exploitation of people and resources. At the same time, it penalizes altruistic, social, cooperative and community oriented behavior. The vast majority of people accept this structure without question, never realizing how deeply it affects their lives and their world. What is it? Surprised? In fact, money is far from being a 'neutral medium of exchange,' as it is often claimed to be. Toxic Money Healthy Money The Life Currency Cooperative Exchange