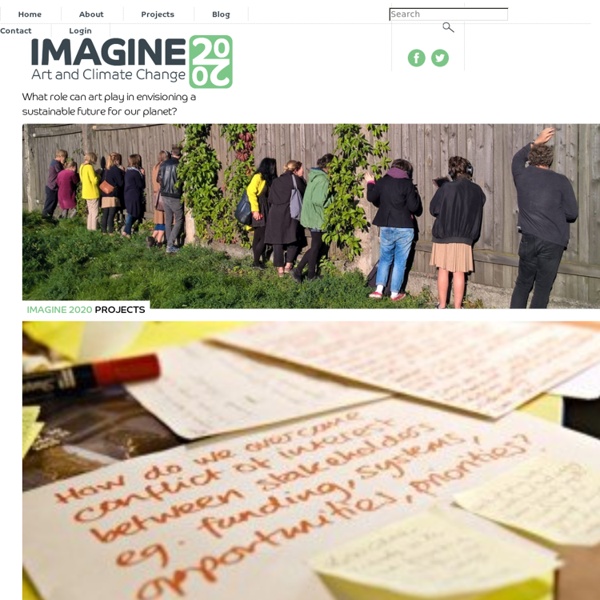 « Transition France Green Art Lab Alliance | Transartists The Green Art Lab Alliance (GALA) is a partnership between 18 European cultural organisations which aims to explore what environmental sustainability means for the visual arts and design. All partners believe that it’s time for culture and the arts to take responsibility in their own innovative and artistic ways. This ambition has been acknowledged by the European Commission, which co-finances the GALA project in the framework of the EU Culture programme 2007-2013. During the two years of collaboration (April 2013-May 2015) the partners want to find out what the arts can do to promote sustainability. Together with designers, artists and scientists, the GALA partners investigate the challenges and opportunities that environmental sustainability implies for artists and art institutions. The overall aim is to share knowledge and raise awareness amongst artists, citizens and policy makers. The participating organisations have a variety of different profiles. Green Art Lab Alliance activities

Identity.Move! - About Let us think then about the 'local', the 'regional', the 'authentic' in the social and economic context and thus see it becoming more and more blurry. The present system of artistic production in Europe forced the performing artists, dancers, choreographers to develop skills of mobility, adjustment and flexibility, which made them a group of precarious culture producers. Paradoxically, even if their attitude towards the system is critical, they do perfectly meet, willingly or not, the standards of the neoliberal, 'westernized' countries. IDENTITY.MOVE! IDENTITY.MOVE!

Call for entries – Coal Prize 2013 – Adaptation The Coal Prize Art and Environment rewards each year a project by a contemporary artist involved in environmental issues. Its goals are to promote and support the vital role which art and creation play in raising awareness, supporting concrete solutions and encouraging a culture of ecology. The winner is selected out of ten short-listed by a jury of well-known specialists in art, research, ecology and sustainable development The 2013 Coal Prize will reward entries that focus on adaptation issues. The award of the 2013 Coal Prize will take place the 2nd of April 2013 in Paris at Le Laboratoire, a private art center specializing in the blending of art and science. The prize carries an award of 10 000 euros. Schedule Application deadline : February 28th, 2013. Adaptation This word is at the heart of contemporary thought and strategies used by nations, cities, businesses, and communities in order to cope with climate change. Selection committee Jury Selection of entries Application package Contact

German ′Transition Towns′ ride wave of change | Germany | DW.COM | 25.09.2012 The water simply won't boil. No surprise really. The pot is far too large for the small camping stove. Cornelia Dorsch takes off the lid to check whether she can add the vegetables yet. She's standing in front of a makeshift table on Servatii Square, where she's about to serve free soup to passersby. All the ingredients are vegetables from the local farmer’s market that were discarded for being slightly discolored. The cooking project is called "Eat up," and its site has been chosen carefully. Vegetables are sourced regionally The topic is serious For a long time, the "city exodus" was a well-documented phenomenon in Germany. It all started in southern England in 2006. Experiment Münster Georg Heinrichs, co-founder of Transition Town Münster, is also excited about Hopkins' ideas. Fostering a new community spirit is the key to the future "Resilient Town" also is the name of a development scheme by the German Ministry for Education and Research. Hands off oil

MakeMeDream The ArtScience Prize ArtScience Labs is an international network of labs with the concept of artscience and the Idea Translation process at its core. ArtScience Labs is an exciting international network of labs, including its federating ArtScience Prize program, founded by David Edwards that aims to promote socially beneficial innovations through cultural experimentation at the frontiers of science. ArtScience Labs performs around fifty experiments annually to engage the creative minds of hundreds of students, artists, designers and scientists around the world, with innovative outcomes in education, industry, culture and society. Conception The Laboratory Program of Artscience Labs is based in Paris at the art and design center Le Laboratoire. Translation The cultural experiments of Artscience Labs are managed in close coordination with corporate, government, philanthropic and non-governmental organization partners in the form of art and design experiments at frontiers of science. Realization Labs

the earthcodes project: substrate/shifting the site of execution The shapes of the chasms themselves become "verbal roots" that spell out the difference between darkness and light. Poe ends his mental maze with the sentence — "I have graven it within the hills and my vengeance upon the dust within the rock." [A Sedimentation of the Mind. Robert Smithson. 1966.] Substrate can refer to a (mined) semiconductor base which is later doped, etched, imprinted on with other minerals and materials within a complex industrial process to form an electrical logic gate, a processing unit, the core of the networked machinery which surrounds us. Substrate interfaces with code, yet this set of symbolic, lingustic and logical operations denies the being-substrate, just as the carrier of any signal is erased by the receiver. Despite software's abstraction the geological maintains a particular attraction, as earth substrate, that which surrounds us, our material.

About The new Leonardo Electronic Almanac, with Editor in Chief Lanfranco Aceti, is a collaborative effort between The MIT Press; Leonardo/ISAST; Goldsmiths, University of London; FACT; and Sabanci University. Established in 1993, Leonardo Electronic Almanac, a peer reviewed journal (ISSN No: 1071-4391), is the electronic arm of the pioneer art journal, Leonardo – Journal of Art, Science & Technology. LEA Editorial Board is composed of internationally recognized academics who are experts in their respective fields. Lanfranco Aceti and Ozden Sahin the Co-Editor envisage the Leonardo Electronic Almanac as an incubator that develops research projects, conferences and exhibition that are later on published in a variety of formats: e.g. catalogs, books and magazine issues. For over a decade, LEA thrived as an international peer reviewed electronic journal and web archive covering the interaction of the arts, sciences, and technology. Leonardo is a registered trademark of the ISAST.

Housing Prototypes: Collective House Street facade, detail. Sven Markelius was an important member of the Stockholm architectural avant-garde in the 1930's. Along with Gunnar Asplund and others, Markelius was instrumental in bring the ideology of Modern Architecture to Sweden as one of the authors of the Functionalist manifesto acceptera, published in 1931. Markelius also socialized with a group of radical Social Democrats who shared an interest in the new architecture and a new social order. From this time, Markelius, along with Alva Myrdal who was a leader in the movement advocating communal housing as a means of emancipating the working woman from the burdens of housekeeping and child rearing, developed an interest in the idea of collective housing. In 1932, Markelius developed a housing scheme for the Alvik area in Stockholm, which applied these collective principles for the first time. Eva Rudberg, Sven Markelius Architect, Arkitektur Förlag, Stockholm, 1989, pp. 77-83. Howard Smith, Marina Botta,

Coal Fired Computers | YoHa Showman's Engine,AV Festival, YoHa 2010 A one-hundred year old, 18-ton showman's steam engine powers a computer with 2.5 tons of coal. Black lungs inflate every time a database record of miners' lung disease is shown on the computer monitors. It feels like you've been invited into a fun fair, but one where the rides log their own accidents – a fun fair run by people who long ago became indistinct from the machines they maintain. Discovery Museum, 2010 Over three days at the Discovery Museum, with groups of miner activists, Coal Fired Computers articulated relations between Power, Art and Media. Jean Demars, Miners Activist Posters. Coal Fired Computers reflects on the complexities of our global fossil fuel reliance and especially on how coal transforms our health as we have transformed it. It could be said that coal dust gets into everything. Originally Commissioned by AV Festival 10 and produced in partnership with Discovery Museum. Copd, lungs,YoHa 2010 Download the booklet