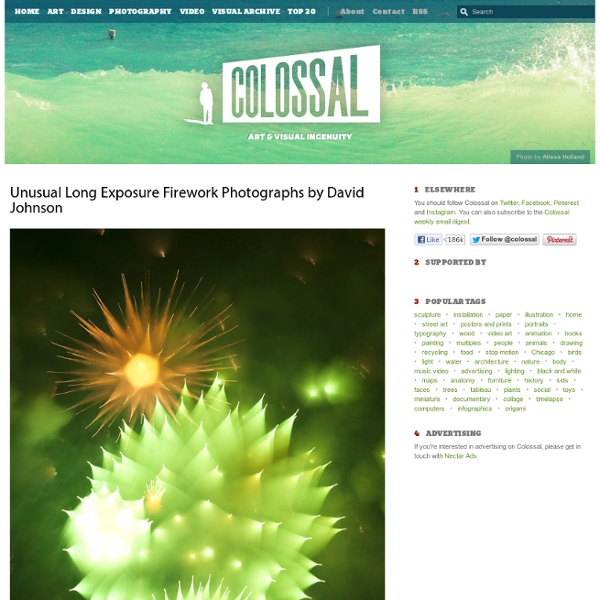 While attending the International Fireworks Show in Ottawa, Canada earlier this month photographer David Johnson had his camera in hand to document the night. When Spain’s entry into the competition begin he decided to try something a little different resulting in the photos you see here which are unlike any long exposure firework shots I’ve ever seen. Via email David tells me how he accomplished the effect: The technique I used was a simple refocus during the long exposure. Each shot was about a second long, sometimes two. I’d start out of focus, and when I heard the explosion I would quickly refocus, so the little stems on these deep sea creature lookalikes would grow into a fine point. What’s interesting is that unlike usual firework photos that seem to make long trails across the sky, Johnson’s photos look like flowers with little triangular plumes coming to a point.

The Pleasure Of: A Video Compilation of Life’s Most Pleasurable Moments by Vitùc Taking the first bite of a watermelon. Cracking an egg. Floating in the ocean on a sunny day. These are brief, seemingly inconsequential moments that almost immediately slip from memory as they pass, neither life-altering or particularly remarkable, and yet taken together they become a sort of texture of our lives. Filmmaker Vitùc recognized the importance of these small moments and collected several dozen of them in his new video short called The Pleasure Of that was shot in part with an iPhone 4s.

Bottle Cap Portrait Artist Mary Ellen Croteau was working on an artwork involving plastic bottle caps, creating tall endless strings that are strung vertically in colorful columns. She repeatedly noticed how some of the caps would fit neatly inside of one another creating new color combinations similar to the portraits of Chuck Close. Inspired, she became sidetracked and embarked on her own self portrait using the colors that “naturally” appeared in the bottle cap plastic. This work was submitted by John Mangahas as part of the Curatorial Contest of Awesomness that was held this past week on Facebook. Missed out on all the action?

Underwater Experiments Continued: Wonderful New Photos of Jellyfish by Alexander Semenov Since first covering the photography of Russian biologist Alexander Semenov (previously) back in January his self-directed “Underwater Experiments” series has continued unabated as he releases other-worldy shots of the Earth’s most elusive creatures almost daily. Again and again Semenov captures some of the most jaw-dropping photographs of underwater life I’ve ever seen, most frequently an animal called lion’s mane jellyfish (Cyanea capillata) which is the largest known species of jellyfish in the world. What you see here only scratches the surface of his work over the last couple of months, definitely urge you to get lost in his underwater gallery.

Portrait Drawn with Ballpoint Pens Nope, not a photograph. This is an amazing portrait drawn by 29-year-old Portugal-based attorney Samuel Silva (he says art is just his “hobby”) based on a photograph by Russian photographer Kristina Tararina. Silva’s medium of choice is standard Bic ballpoint pens on paper and this particular portrait uses eight different colors, taking some 30 hours to complete. The drawing went gangbusters on Reddit last night and Silva fields a number of questions about his work over on deviantART. You can see many more of Silva’s drawings here.

Photographs from the Edge of the World Mikko Lagerstedt is a self-taught photographer based-in Finland who only started shooting back in December 2008. Since then, he has captured a number of hauntingly beautiful landscape photographs showing both stars and self-portrait silhouettes hovering over the horizon line. His latest project is simply titled “Edge”, and features “atmospheric photography” of the Finnish landscape. Lagerstedt writes, I’m a graphic designer and self-taught photographer from Finland [...] Composite Photographs Blend Scenes from the 1906 San Francisco Earthquake and Present Day In this series of carefully photoshopped images, photographer Shawn Clover created composite photographs that blend historical scenes from the 1906 San Francisco earthquake and his own present-day captures of the same locations. A number of other artists have created similar images, most notably Sergey Larenkov’s Ghosts of WWII, but Clover really seems to have put in extreme amounts of effort in trying to determine how each photograph precisely overlaps the other, resulting in some fascinating interactions between past and present. Clover’s work is broken into two parts, Part 1 was created in 2010 and Part 2 was completed just last month. (via Laughing Squid)

Top 50 Pictures of the Day 2011 Every day at 5pm the Sifter posts the Picture of the Day. Below you will find a collection of the Sifter’s Top 50 from 2011. It’s hard to imagine the year is almost over, time seems to fly faster each successive year so it’s fun to take a moment and look back at the year that was. Creative black and white photography by Giles McGarry "I am an IT Consultant living in rural Suffolk but spending most of my life in the city. I started out taking photos to relax and to escape the humdrum of the city – this naturally lead me to the beach where I spent hours whiling away the time shooting long exposure seascapes. However a couple of years ago I rediscovered my first love – which ironically is the city. I’d spent years working there not noticing what was around me. Since then I’ve paid much more attention to my surroundings and finding those hidden gems that most people miss. I still like to escape and I use long exposure to do this – but now its in and amongst all of that hubbub." ~ Giles McGarry For more creative black and white photography by Giles McGarry, you can visit his flickr photostream here or his website here.

Noah Kalina Updates Self-Portrait Video to Include 12.5 Years of Daily Portraits (4,514 Photos!) Photographer Noah Kalina has been taking a self-portrait each day for the last 12.5 years as part of his aptly titled Everyday project. Six years ago a video chronicling six years of portraits set to music by Carly Commando took the internet by storm spawning legions of people to embark on similar self-portrait projects. This morning Kalina released an updated video containing some 4,500 photographs shot from January 11, 2000 through June 30, 2012. Here they are all at once. Top 50 Pictures of the Day 2012 Jun 28, 2012 *Update: The Top 100 ‘Pictures of the Day’ for 2012 have just been published. Click here to check out the most up-to-date post! After the positive reception from last year’s “Top 50 ‘Pictures of the Day’ for 2011“, we promised to highlight the top 25 ‘Pictures of the Day’ at the end of every quarter, eventually culminating in an epic Top 100 for 2012. It’s hard to believe we’re at the halfway point for 2012. Please note the photographs themselves were not necessarily taken in 2012, they just happened to be featured as a ‘Picture of the Day’ this year :) Enjoy!