The Ego and the Universe: Alan Watts on Becoming Who You Really Are 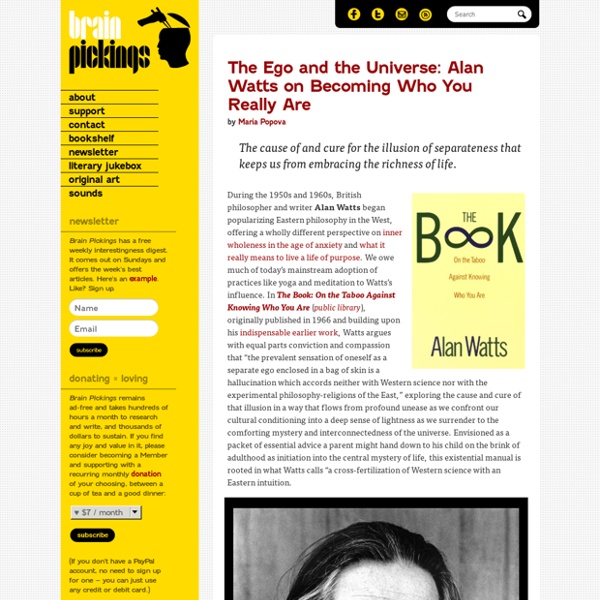 by Maria Popova The cause of and cure for the illusion of separateness that keeps us from embracing the richness of life. During the 1950s and 1960s, British philosopher and writer Alan Watts began popularizing Eastern philosophy in the West, offering a wholly different perspective on inner wholeness in the age of anxiety and what it really means to live a life of purpose. We owe much of today’s mainstream adoption of practices like yoga and meditation to Watts’s influence. Alan Watts, early 1970s (Image courtesy of Everett Collection) Though strictly nonreligious, the book explores many of the core inquiries which religions have historically tried to address — the problems of life and love, death and sorrow, the universe and our place in it, what it means to have an “I” at the center of our experience, and what the meaning of existence might be. Watts considers the singular anxiety of the age, perhaps even more resonant today, half a century and a manic increase of pace later: Related:  The Walk • supersensible

Astral 101: Breakdown of Everything & Using the Third Eye Hello my Astralnauts! It’s been a very long time. Many times have a tried to write an apology for my absence, but I’ve realized that I’ve had to come to this point in my life so that I could continue to do the best I can to provide you with knowledge. I do hope you can forgive me. This is my final article of the Astral 101 series, I’ll hopefully be starting another article series after this, if Jordan decides that is okay. Today, we are going to revisit everything that we’ve gone through and make sure there is a clear understanding of all the concepts presented. Dimensions A dimension refers to a specific frequency of vibration in reality. Astral 101 has mainly focused on the fourth dimension, or the astral plane, which is hard to describe while on the third dimension, as it is beyond our 3D comprehension. Meditation grounding (connecting with the earth and stabilizing the self), visualization (imagining a story playing out in your mind to probe subconscious imagery), Higherselves Entities

30 Questions to Ask Yourself Before You Die {Via studioflowerpower on etsy} “Rather than money, than fame, than love…give me truth.” ~ Thoreau I woke up this morning and my life clock marked 30. My first sleep-deprived idea was to pack a small suitcase, get on the first train, move to another country, change my name, change my hair color (or get plastic surgery if needed), and start from scratch. When I don’t know how to deal with life, I hide sometimes. By now, I’m good at both: fighting and disappearing. A true warrior doesn’t feel forced to do either, but moves through and with and for life, like water. So after I washed my face and considered the costs of running and those of fighting, I decided to do neither and have some juice instead. {Alkaline Espresso / Click for recipe.} We are a constant process, an event, we’re change. As such, our smaller houses, our temporary homes can only be made of cards. Loving the questions means to love yourself. So here is an exercise we can do together: a tweak to your usual bucket list. You.

Your Cosmic Horoscope 25th August 2014 (Virgo New Moon) Whether it’s your physical health or your mental stability, it’s time to clean up the act a bit and get into some routine that is actually working to keep you healthy. Yet, no conventional practice is going to cut it. Also a word about your work. For the latest Cosmic Update click here There is enough insight and wisdom among your friends and (perhaps online) community to inspire you to take a magic carpet ride into the vast unknown areas of your subconscious. Yet don’t get too excited. A way out. Just like returning a gift that you have not opened, if you do not claim any nasty criticism it returns back to its source. Since it’s really hard to work out exactly where you’re heading in life right now you turn your attention inwards this month and assess your home and private matters. Sometimes it is as important to be diligent in forgetting as in remembering, otherwise the whole exercise of living becomes one of pedantry, not culture. Respect that is.

Maya Angelou on Identity and the Meaning of Life by Maria Popova “Life loves the liver of it. You must live and life will be good to you.” The light of the world has grown a little dimmer with the loss of the phenomenal Maya Angelou, but her legacy endures as a luminous beacon of strength, courage, and spiritual beauty. Reflecting on her life, Angelou — who rose to cultural prominence through the sheer tenacity of her character and talent, despite being born into a tumultuous working-class family, abandoned by her father at the age of three, and raped at the age of eight — tells Rich: I’ve been very fortunate… I seem to have a kind of blinkers. She later revisits the question of identity, echoing Leo Buscaglia’s beautiful meditation on labels, as she reflects on the visibility her success granted her and the responsibility that comes with it: What I represent in fact, what I’m trying like hell to represent every time I go into that hotel room, is myself. The kindnesses … I never forget them. Donating = Loving Share on Tumblr

Aurélien Pumayana Floret - Sacred Visual Alchemist Zentangle: Pattern-Drawing as Meditation by Maria Popova If greater creativity and more mental balance are among your new year’s resolutions, look no further than Zentangle — a type of meditation achieved through pattern-making, created by artist duo Maria Thomas and Rick Roberts. Each pattern is built one line at a time, organically combining simple patterns into complex zentangles in unplanned, unexpected ways that grow, change and unfold on the page as you enter an immersive state of flow. Totally Tangled offers a fantastic introduction to the relaxing and beautiful practice through step-by-step instructions and over 100 original tangles. We’re particularly taken with Zentagle because its basic principle — building on simple shapes and combining different patterns into complex creativity — is such a beautiful visual metaphor for our core philosophy of combinatorial creativity. Donating = Loving Bringing you (ad-free) Brain Pickings takes hundreds of hours each month. Brain Pickings has a free weekly newsletter. Share on Tumblr

Andy Warhol on Sex and Love by Maria Popova “Romance is finding your fantasy in people who don’t have it.” “Is sex necessary?” young E.B. White and James Thurber asked in their endlessly delightful 1929 collaboration. “When we hook up with another, in sex or love (or, more rarely, both) we prove that our isolation is not permanent,” Dorion Sagan, son of Carl and a terrific science storyteller in his own right, wrote in his fascinating history of sex. Warhol, who identified as gay and whose work drew heavily on his participation in the LGBT community, confessed to his biographer in 1980, at the age of fifty-two, that he was still a virgin. Portrait of Andy Warhol by Jack Mitchell Warhol’s central premise is that our greatest anguish about love and sex comes from the buildup of our fantasies and their inevitable clash with reality — the bodily counterpart to Stendhal’s “crystallization” theory. The most exciting thing is not-doing-it. There should be a course in the first grade on love. Donating = Loving

SBaGen -- Binaural Beat Brain Wave Experimenter's Lab Intro | Mailing lists | Downloads | FAQ | TODO Intro Welcome to the world of Binaural Beats! The theory behind binaural beats is that if you apply slightly different frequency sine waves to each ear, a beating affect is created in the brain itself, due to the brain's internal wiring. Here is a table from Calleman on how brain-wave frequencies relate to Earth layer boundary resonant frequencies: It is also possible to produce mixtures of brain waves of different frequencies by mixing binaural tones, and in this way, with practice and experimentation, it is reportedly possible to achieve rather unusual states, such as out-of-body stuff, and more. I should add that I have only read about the more advanced and unusual uses (OOBEs and so on). So, SBAGEN is my utility, released as free software (under the GNU General Public Licence) for Linux, Windows, DOS and Mac OS X, that generates binaural tones in real-time according to a 24-hour programmed sequence read from a file. Downloads Community More:

List of unusual deaths This is a list of unusual deaths. This list includes unique or extremely rare circumstances of death recorded throughout history, noted as being unusual by multiple sources. Some of the deaths are mythological or are considered to be unsubstantiated by contemporary researchers. Oxford Dictionaries defines the word "unusual" as "not habitually or commonly occurring or done" and "remarkable or interesting because different from or better than others."[1] Some other articles also cover deaths that might be considered unusual or ironic, including List of entertainers who died during a performance, List of inventors killed by their own inventions, List of association footballers who died while playing, List of professional cyclists who died during a race and the List of political self-immolations. Antiquity[edit] Middle Ages[edit] Renaissance[edit] 18th century[edit] 19th century[edit] 20th century[edit] 1920s[edit] 1950s[edit] 1960s[edit] 1961: U.S. 1970s[edit] 1980s[edit] 1990s[edit]