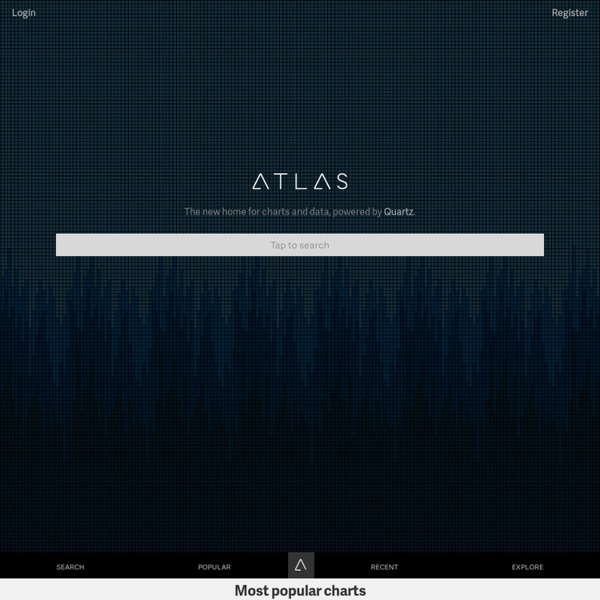 25 Stats That Show How Marketing Is Changing Raise your hand if you’ve heard that B2B brands that blog receive 67 percent more leads, or that only about one-third of marketers have a documented content strategy. Now put your hand down. You work in an open office and look kind of crazy. Point is, we tend to encounter the same content marketing stats over and over. Data Wrangler UPDATE: The Stanford/Berkeley Wrangler research project is complete, and the software is no longer actively supported. Instead, we have started a commercial venture, Trifacta. For the most recent version of the tool, see the free Trifacta Wrangler. iVisDesigner iVisDesigner stands for Information Visualization Designer, which is a platform in which users can interactively create customized information visualization designs for a wide range of data structure. iVisDesigner was started around March 2013 as the undergraduate thesis project of Donghao Ren, its overall goal comes partially from the previous Visualization Assembly Line project, which allows users to freely create axis-based visualizations for multidimensional datasets, like scatterplots and parallel coordinates. In iVisDesigner, we employed a new approach. By allowing users to interactively create mappings from data elements to graphical elements, we support interactive creation of information visualization designs. iVisDesigner is much more expressive, allowing a wide range of visualization designs for different data structures be accomplished without any programming. Design and Program: Donghao Ren, University of California, Santa Barbara, Peking University.

Join the Born B Movement - The B Team The startup community is a powerful driver of disruptive innovation, creativity and change in the business world. New companies have the opportunity to manage their businesses in progressive and innovative ways from the start, rather than backwards engineering them when they become large and complex. When a new company embraces and integrates social and environmental purpose into its core business model from inception, it has the opportunity to vastly improve its ability to address long-standing global challenges.

ly.js Open-Source Announcement November 17, 2015 A growing number of graphing tools and libraries allow anyone to make beautiful, interactive web-based graphs. By interactively visualizing our data online, we share complex ideas in an exploratory, visual, open, and collaborative way. Today, Plotly is announcing that we have open-sourced plotly.js, the core technology and JavaScript graphing library behind Plotly’s products (MIT license). It's all out there and free. Any developer can now integrate Plotly’s library into their own applications unencumbered. Arts & Culture Loading Explore stories from around the world Circular forms. Sun and Moon by Robert Delaunay Kunsthaus Zürich

Evergreen Cooperatives take the spotlight in Cleveland, OH during GOP Convention The presence of the 2016 Republican National Convention cast a national spotlight on Cleveland, Ohio. Looking to highlight the struggles and hopes of ordinary low-income local residents, many visiting journalists found their way to the Evergreen Cooperatives, a group of three linked employee-owned social enterprises based in the Greater University Circle area of Cleveland's East Side. Evergreen's groundbreaking model (known fondly as the Cleveland Model) emerged through a collaboration between the Cleveland Foundation and the Democracy Collaborative as they sought to create an ecosystem of linked institutions working for the common good, and has provided a visionary example of how to create a financially and environmentally sustainable business model that puts workers and communities first. Green City Growers, the U.S.'