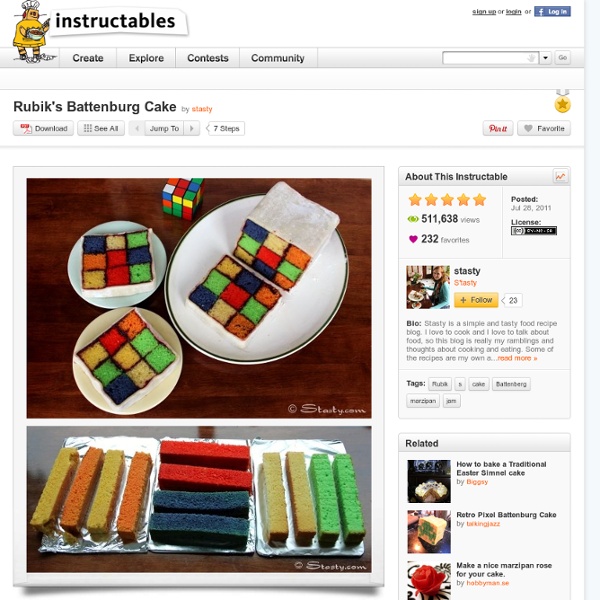 Why make this cake? The Rubik’s cube is close to my heart as I am a child of the eighties and the Rubik’s cube always brings me back to a time of joy and wonder. It’s hard to imagine kids today being as fascinated as I was by such a simple but clever toy. I wanted to make a cake that epitomizes this ingenious and timeless invention. I knew it would have to be a clever cake that would make you question how it was made. Thankfully I had the help of my other half and his engineering brain to assist with the planning and general maths of this cake. Materials ListOne Basic Battenberg – White coloured and Yellow coloured cake - 6 oz. of butter - 6 oz. of castor sugar - 3 eggs - 6oz of self-rising flour - 2 drops of almond essence (optional for the white) - Zest of half an unwaxed lemon (optional for the yellow) - few drops of yellow food colouring

Playful three are best friends By DAILY MAIL REPORTER Rare sighting: An endangered De Brazza's monkey plays with one of the two Jack Russell Terriers at Barnley's Guesthouse in Kitale, Kenya It was a moment of horror for wildlife photographers Vicki and Adam Scott Kennedy as they witnessed a rare De Brazza's monkey being 'attacked' by two Jack Russell terriers in Kenya. But that horror soon turned to joy as they realised that, in fact, the animals were only playing and the couple were witnessing a unique spectacle. For no sooner had the two dogs released the monkey from their grip, than the monkey turned the tables and chased them around the gardens of Barnley's Guesthouse near Kitale in northwest Kenya. Surprise: The Kennedys had heard that a lone De Brazza's Monkey, an endangered species in Kenya, had been seen occasionally in and around the gardens of the guesthouse

LaSaGnA TiMpAnO I went to see tUnE-yArDs on Monday night with some friends, and as always we wanted to cook a meal that somehow related to the show we were heading to. Sometimes this is hard to do, but other times it seems to come naturally. Finding culinary inspiration in Merrill's lyrics seemed like it would be tough, but my sister knew what she wanted to make without hesitation. "How about something layered, because of all the vocal and instrument layering in the music?" From there we worked together to come up with this deep, colorful, and multi-flavored lasagna version of a timpano. If you are using words like deep, colorful, and multi-flavored to describe something inspired by tUnE-yArDs, you already know you got it right!

Apple Shaped Cupcakes It’s September, so apples are on the brain, can you tell? With apple cards, candy apples, yarn apples, I can’t seem to get enough. Well, as I was browsing Pinterest, which I’m addicted to, I came across this post from Muses of Megret on baking your cupcakes into Valentine hearts. It’s such a cute and clever way to bake these! It sparked a thought that this method would also make the perfect shape for an apple as well. So here are apple cupcakes, cute as ever! Bamboo orb pendant lights Apologies for my long absence. A month ago I landed a full-time job (gotta pay the bills) along with a 3-hour round-trip commute. Ugh. It’s left little time for crafting. Not to worry, I’m still going to keep blogging, but it might be on an infrequent basis until I adjust to my new schedule. For now, it feels good to be back!

Turtle Burgers, Anyone? I got an email today with directions on how to make Turtle Burgers, and I am still laughing about it! Crazy, right? Not to mention a heart attack waiting to happen. Next time you want to grill hamburgers and hot dogs, put them together, slap some bacon on them and create these, um, delicious turtles. Planet Streetpainting's 3D Lego army - the making Posted on November 9, 2011 in Bizarre If you’re new here, you may want to subscribe to our RSS feed or follow us on Facebook or Twitter . Thanks for visiting! Rate this Post Parmesan Roasted Potatoes Ok fine. I’m officially ready to make the transition to fall. And I thought, what better way to do it than with my all time favorite Parmesan Roasted Potatoes! These are like candy. 100% addictive. Once you stop, you just can’t stop.

Andes Mint Cupcakes New photo from my cookbook “Your Cup of Cake” I was introduced to Andes Mints at a very young age. Though, my strongest memory was not of eating them, it was of being attacked by them. My family commonly went to a little Mexican restaurant in town, and when we finished eating we would get these mints with the check. My two older brothers would make a sort of blow dart from the wrapper, and choose their target. Me. D.I. Why? Orb-lando Dear World, Do you want a chandelier that’s uniquely you, but don’t know where to start? Well, you’re in luck, because a few months ago I made a delightful Orb chandy I’m calling Orb-lando. rainbow cake - The Domestic Mama & The Village CookThe Domestic Mama & The Village Cook - the soon to be four year olds answer to “What kind of cake do you want for your birthday?” My warning to all of you thinking of attempting this process. Hire a dishwasher if you don’t have one. Because you’re going to mess up a lot of dishes. Don’t do it when you’re stressed about a hurricane that may make landfall on your house.