"Experts" Push For Lithium To Be Added To Our Drinking Water. Apparently there are not enough chemicals already added to our drinking water, as there is now a call by “experts” to further poison our water supplies by adding Lithium. 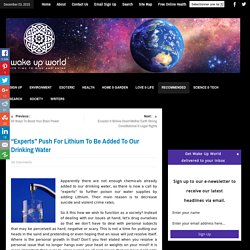 Their main reason is to decrease suicide and violent crime rates. So it this how we wish to function as a society? Instead of dealing with our issues at hand, let’s drug ourselves so that we don’t have to deal with personal subjects that may be perceived as hard, negative or scary. This is not a time for putting our heads in the sand and pretending or even hoping that an issue will just resolve itself. Where is the personal growth in that? What is Lithium usually prescribed for? Bi polar disorderAgitation not associated with bipolar disorderDepression and to boost the effect of antidepressantsAs a mood stabiliserSever Migraine Headaches So what are “experts” saying? “Time to supplement? If anyone still believes that adding fluoride into our drinking water is a good idea. 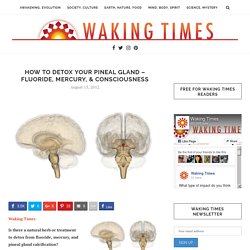 The first intentional addition of fluoride in drinking water occurred in the early 1930′s in Nazi Germany. Marketing it as supposed helping children’s teeth, the actual sodium fluoride was to sterilize humans and force the masses into a calm docile state of submission and declining health-state. Control of the population through this manner was easily achievable. Research chemist Charles Perkins was sent by the U.S. government to ascertain the truth on water fluoridation and found: “”The German chemists worked out a very ingenious and far-reaching plan of mass control that was submitted to and adopted by the German General Staff. Fluoride from water in our drinking water, food, and showers, enters our bloodstream and has a half-life of over 20 years, causing massive brain damage to unborn fetuses and gradually impairs IQ, as well as depressing cell growth rate. 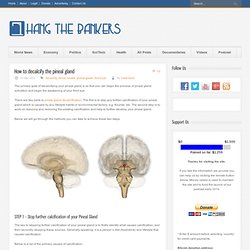 Learn how to build a natural swimming pool in order to create a cooling summer retreat for your homestead. 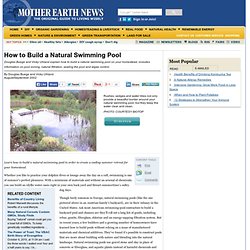 Whether you like to practice your dolphin dives or lounge away the day on a raft, swimming is one of summer's perfect pleasures. With a minimum of materials and without an arsenal of chemicals, you can build an idyllic water oasis right in your own back yard and thwart summertime's sultry dog days. Though fairly common in Europe, natural swimming pools (like the one pictured above in an Austrian family's backyard), are in their infancy in the United States. Ask most American swimming-pool contractors to build a backyard pool and chances are they'll roll out a long list of goods, including rebar, gunite, fiberglass, chlorine and an energy-sapping filtration system.