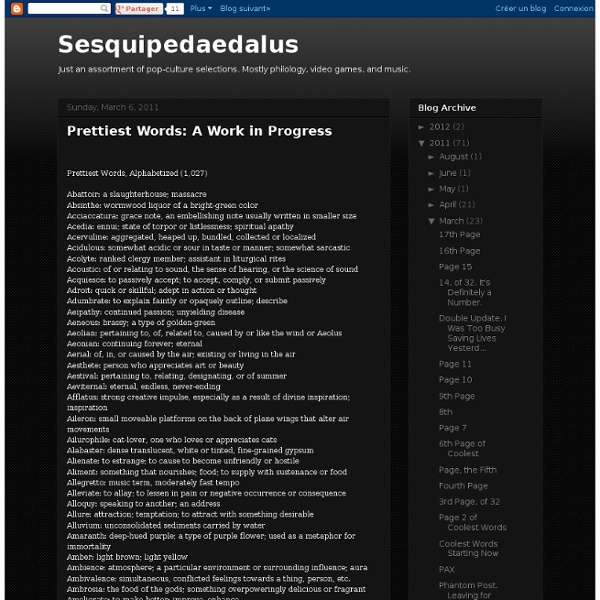 Prettiest Words, Alphabetized (1,027) Abattoir: a slaughterhouse; massacre Absinthe: wormwood liquor of a bright-green color Acciaccatura: grace note, an embellishing note usually written in smaller size Acedia: ennui; state of torpor or listlessness; spiritual apathy Acervuline: aggregated, heaped up, bundled, collected or localized Acidulous: somewhat acidic or sour in taste or manner; somewhat sarcastic Acolyte: ranked clergy member; assistant in liturgical rites Acoustic: of or relating to sound, the sense of hearing, or the science of sound Acquiesce: to passively accept; to accept, comply, or submit passively Adroit: quick or skillful; adept in action or thought Adumbrate: to explain faintly or opaquely outline; describe Aeipathy: continued passion; unyielding disease Aeneous: brassy; a type of golden-green Aeolian: pertaining to, of, related to, caused by or like the wind or Aeolus Aeonian: continuing forever; eternal Aerial: of, in, or caused by the air; existing or living in the air

Syllables, Scrabble Letters, and Picking Brand Names - Rich Barton The Completely Ownable, “Made-Up” Consumer Brand Wins Long Term I wrote this as a private email in 2006 and just refreshed for the blog “Should we call our site something literal or should we make up a new word?” This is a question I often get asked by consumer product/service entrepreneurs. In light of Microsoft’s re-launch of Microsoft MSN Live Search as “Bing”, I thought it timely to re-fresh some old thoughts I’ve had about naming, words, and branding. It shouldn’t come as a surprise that I believe it is much more powerful long-term to make up a new word (e.g., Expedia, Zillow, or recently Glassdoor, 3 words that my teams have created) than it is to use a literal word (e.g., Travel.com, RealEstate.com, or Jobreviews.com).

Wine tasting descriptors Smelling is an important part of wine tasting; it is thought that much of perceived taste is due to olfactory receptors at the back of the nasal cavity. Aroma vs. bouquet[edit] A common aroma associated with the grape variety Gewürztraminer is lychee fruit. The technique of microoxygenation has an impact on the aromatic bouquet.[3] Components of a wine's aroma[edit] The case of the missing “u”s in American English Before you consciously became aware of your decision to read this article, your brain was already making the necessary preparations to click the link. There are a few crucial milliseconds between the moment when you’re consciously aware of a plan to act, and the moment you take action. This brief window is thought by some scientists to be the moment in time when we can exercise free will. It gives us the chance to consciously make a decision, suggesting we aren’t just slaves to our impulses. But, as the New Scientist reports, a study published in Neuroscience of Consciousness last year found that impulsive people have a shorter window of time between their awareness of an impending action and the act itself. Emilie Caspar and Axel Cleeremans from the Free University of Brussels asked 72 people to fill out surveys to determine their level of impulsivity.