Phrases you wish you could say at work 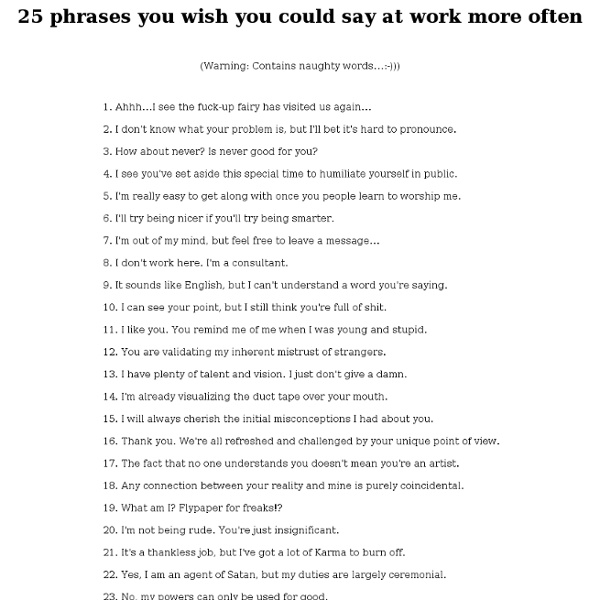 Personal Finance News & Advice “I am always surprised how some interviewees tend to trail off towards the end of an interview instead of finishing strong and leaving a lasting impression,” says Zachary Rose, CEO and founder of Green Education Services, a green jobs training firm in New York City. Whether you’re a senior preparing for campus recruiting or a recent graduate still hunting for a job, here are the top questions experts recommend asking at the end of a job interview to leave a great final impression on hiring managers and establish yourself as a top candidate. “Is There Any Reason Why You Wouldn’t Hire Me?” Kelsey Meyer, senior vice president of Digital Talent Agents in Columbia, Mo., says, “A recent candidate asked, ‘If you were to not offer the job to me, what would be the reason?’ This was extremely straightforward and a little blunt, but it allowed me to communicate any hesitations I had about the candidate before he left the interview, and he could address them right there.”

Lateral Thinking Puzzles - Preconceptions Lateral thinking puzzles that challenge your preconceptions. 1. You are driving down the road in your car on a wild, stormy night, when you pass by a bus stop and you see three people waiting for the bus: 1. 10 Sages With 10 Inspiring Messages Throughout the ages there have been a few notable luminaries of humanity that have experienced a transformational harmonization initiated by the vectors of human becoming: love, beauty, and truth. We can look up to these sages for inspiration that cultivates courage, will, and determination to experience an inner transformation as well. Although there are quite a few individuals that we can look to for sage-like guidance, 10 will be focused on here, each with a message they streamed into the global mind in their own unique way. Let these words spark a shift within that will change the very way to see Reality.

Murphy and Friends You might guess that a collection of 'laws' might focus on quotes from famous legal documents or court decisions, or even on humorous or outdated codes from US or international law. Nope. This is the 'Science' section - a collection of observed, imagined, or empirical laws of nature, social science and technology. More specifically, it is on observations of how these things don't always go the way we want them to. The archetypal example is, of course, the original Murphy's Law, credited to Edward Murphy, that "if anything can go wrong, it will." Shakespeare Insult Kit Shakespeare Insult Kit Since 1996, the origin of this kit was listed as anonymous. It came to me on a piece of paper in the 90's with no attribution, and I thought it would make a cool web page. Though I searched for the origin, I could never find it.

Einstein's Puzzle # Copyright (C) 2004 Lauri Karttunen # # This program is free software; you can redistribute it and/or modify # it under the terms of GNU General Public License as published by # the Free Software Foundation; either version 2 of the License, or # (at your option) any later version. # This program is distributed in the hope that it will be useful, # but WITHOUT ANY WARRANTY; without even the implied warranty of # MERCHANTABILITY or FITNESS FOR A PARTICULAR PURPOSE. See the # GNU General Public License for more details. Einstein's Puzzle Variations of this riddle appear on the net from time to time. It is sometimes attributed to Albert Einstein and it is claimed that 98% of the people are incapable of solving it. Some commentators suggest that Einstein created such puzzles not to test out intelligence but to get rid of all the students who wanted him as an advisor.

Playground Interactive activities, some used other places on Serendip for other reasons, and others just because ...? The idea, of course, is that there isn't a whole lot of difference between playing and learning ... exploring is the underpinnings and enjoyment inherent in both. If that idea makes you think of either play or education in new ways, so much the better. Regardless, the web provides not only information and pictures, but also the wherewithal to have experiences that you might not otherwise have a chance to have.

2012 March 12 - The Scale of the Universe Interactive Discover the cosmos! Each day a different image or photograph of our fascinating universe is featured, along with a brief explanation written by a professional astronomer. 2012 March 12 Role Playing Games Online - Play Free Multiplayer RPG Adventure Games Astro Lords is an MMORPG/Strategy set in a sci-fi universe. Players control an asteroid, construct and upgrade buildings and fight with others to gain control over the Oort cloud. The game can be played on iOS, Android and desktop devices. Players might be positively appalled by the lack of character customization, but that is more than compensated by the fact that eventually you can move your base, perhaps towards the members of your alliance, or the enemy if you feel you can gain an edge.

10 Psychological Experiments That Went Horribly Wrong Psychology as we know it is a relatively young science, but since its inception it has helped us to gain a greater understanding of ourselves and our interactions with the world. Many psychological experiments have been valid and ethical, allowing researchers to make new treatments and therapies available, and giving other insights into our motivations and actions. Sadly, others have ended up backfiring horribly — ruining lives and shaming the profession. Here are ten psychological experiments that spiraled out of control. 10. Stanford Prison Experiment

Space-Time -Could It Be a Mirage? New Theory Says "Yes" (Todays Most Popular) Space-time - that plastic fabric whose geometry can be changed by the gravity of stars, planets and matter - may be no more than a mirage, according to Peter Horava. Horava, who is at the University of California, Berkeley, wants to rip this fabric apart and set time and space free from one another in order to come up with a unified theory that reconciles the disparate worlds of quantum mechanics and gravity. The focus of last year's Nobel Prize for Physics, graphene, may unlock the solution. The world's physics community has started using Horava heresy to explain away the twin cosmological mysteries of dark matter and dark energy.

Clever Ads Billboard Here is a series of brilliant billboard ads dedicated to promoting science in Vancouver, by Science World Museum in collaboration with Rethink Canada… World museum – Rethink Canada My collection of funny emails from my inbox. Subject: 5 MINUTE MANAGEMENT COURSE Lesson 1: A man is getting into the shower just as his wife is finishing up her shower, when the doorbell rings. 50 Lessons I wish I had learned earlier Welcome to our blog! Here you'll find bits and pieces of wisdom learned from cycling 17,000 miles from Alaska to Argentina together as a family. Hope it inspires you to live your dream! My book about our journey, Changing Gears, is now released!