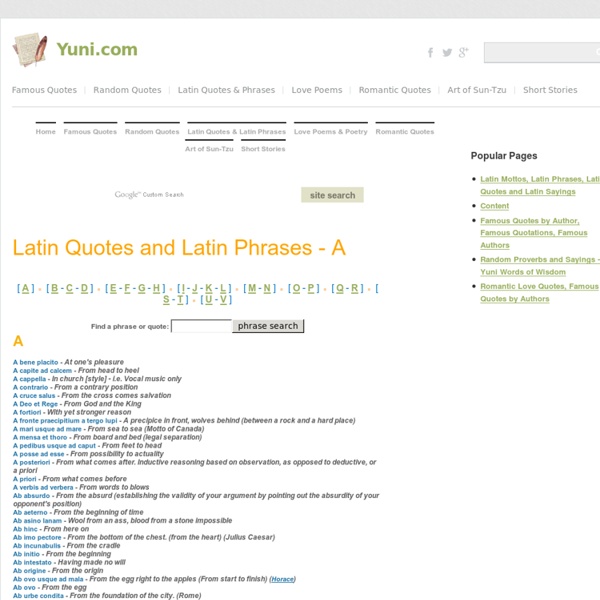 A bene placito - At one's pleasureA capite ad calcem - From head to heelA cappella - In church [style] - i.e. Vocal music onlyA contrario - From a contrary positionA cruce salus - From the cross comes salvationA Deo et Rege - From God and the KingA fortiori - With yet stronger reasonA fronte praecipitium a tergo lupi - A precipice in front, wolves behind (between a rock and a hard place)A mari usque ad mare - From sea to sea (Motto of Canada)A mensa et thoro - From board and bed (legal separation)A pedibus usque ad caput - From feet to headA posse ad esse - From possibility to actualityA posteriori - From what comes after.

Mind-Blowing Origami Based on Comics, Manga, Anime and Video Games - ComicsAlliance As an origami admirer with extremely limited skills (and even more limited patience), I’m always impressed by the artists who pull off works of art from paper. In the case of Brian Chan, however, I’m beyond impressed – I’m absolutely floored. The artist accomplishes beautiful creatures from across the animal kingdom, but takes his work one step further by folding likeness of some of the most celebrated characters from the four corners of fandom.

Mamihlapinatapai - Wikipedia, the free encyclopedia - StumbleUpon The word Mamihlapinatapai (sometimes spelled mamihlapinatapei) is derived from the Yaghan language of Tierra del Fuego, listed in The Guinness Book of World Records as the "most succinct word", and is considered[by whom?] one of the hardest words to translate. It allegedly refers to "a look shared by two people, each wishing that the other will offer something that they both desire but are unwilling to suggest or offer themselves

50 (More) Life Secrets and Tips Investigate what is known about deathWhat do you know about death? You certainly have beliefs around it, but what do you know about the science of death, or of those who have died and been brought back to life? Death is not as big of a mystery as it is made out to be. The 7 Weirdest Drugs in World History Throughout history people have turned to some very weird sources to get high. From a 6050 BC cave painting in Algeria that depicts a “mushroom-man” to the 2009 phenomenon of getting high on mp3s, it appears that man has tried everything. Here are 7 of the weirdest: 1. Ayahuasca Saudade - Wikipedia, the free encyclopedia - StumbleUpon Saudade (European Portuguese: [sɐwˈðaðɨ], Brazilian Portuguese: [sawˈdadi] or [sawˈdadʒi], Galician: [sawˈðaðe]; plural saudades)[1] is a Portuguese and Galician word that has no direct translation in English. It describes a deep emotional state of nostalgic or profound melancholic longing for an absent something or someone that one loves. Moreover, it often carries a repressed knowledge that the object of longing may never return.[2] A stronger form of saudade may be felt towards people and things whose whereabouts are unknown, such as a lost lover, or a family member who has gone missing.

Crochet School Lesson 1: Welcome and Intro to Crochet - Craftyminx When I was little I hated crocheted afghans. There, I said it, I'm so glad I could get that off my chest! The problem I had with afghans was that they were rough and stiff and made out of the most garish colors -- Orange, Army Green, rust, and brown. They weren't something I ever wanted to snuggle up with, in fact I remember refusing to use the afghan that was draped on the back of our couch for as long as I can remember. My mom crocheted most of my life and later I learned that my grandmother and great-grandmother and so-on crocheted. And while I grew up around the craft, I never had an appreciation for it.

Cult Movies - Top 10 List - Top Ten List - Top 10 Films About Nonconformists - Nonconformity Quotes - Nonconformist Quotes - Nonconformists in Film - Barfly Top 10 Films About Nonconformists "This is a world where everybody's gotta do something. Ya know, somebody laid down this rule that everybody's gotta do something, they gotta be something. You know, a dentist, a glider pilot, a narc, a janitor, a preacher, all that . . . Sometimes I just get tired of thinking of all the things that I don't wanna do. Top 10 Cool Places in New Zealand ~ Travelphant Travel Blog - StumbleUpon As scenic places go, New Zealand's has epic scenery in abundance! Lord of the Rings was filmed here and The Hobbit for this very reason. New Zealand has spectacularly diverse and beautiful landscape with vast mountain ranges, steaming volcanoes, stunning coastlines, deeply indented fiords and lush rainforests. Comparable in size or shape to Great Britain, Colorado or Japan, New Zealand has a population of only 4 million - making it one of the world's least crowded countries. New Zealand is a haven for those seeking peace and relaxation and also its a well known playground for thrill seekers and adventurers. A temperate climate with relatively small seasonal variation makes it an ideal year-round holiday destination.

100 Very Cool Facts About The Human Body - Global One TV The Brain The human brain is the most complex and least understood part of the human anatomy. There may be a lot we don’t know, but here are a few interesting facts that we’ve got covered. Nerve impulses to and from the brain travel as fast as 170 miles per hour. Ever wonder how you can react so fast to things around you or why that stubbed toe hurts right away? It’s due to the super-speedy movement of nerve impulses from your brain to the rest of your body and vice versa, bringing reactions at the speed of a high powered luxury sports car.The brain operates on the same amount of power as 10-watt light bulb.

30 Challenges for 30 Days Did you know that it takes 30 days to form a new habit? The first few days are similar as to how you would imagine the birth of a new river. Full of enthusiasm it gushes forth, only to be met by strong obstacles.