Find quotes about anything and everything 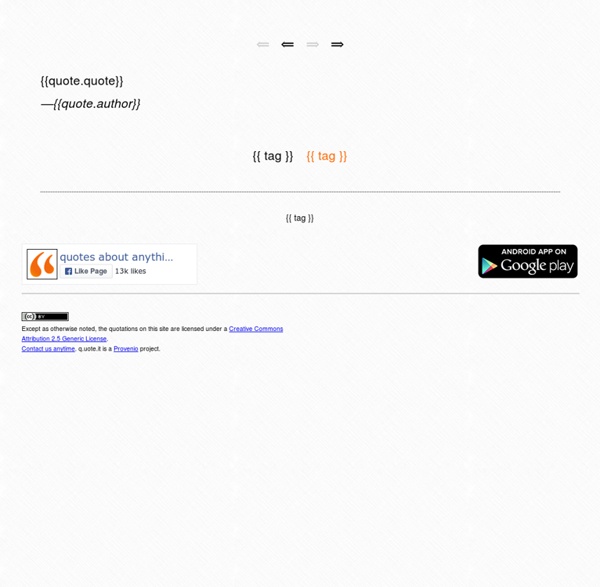 Love Quotes: The Wisest, Wittiest . . . and Most Cynical Having reviewed many 100s of quotations on the wonders--and woes--of romantic love , here are some that I think represent the very best. At the same time that many of the quotes below celebrate the many joys of romantic--almost fairy-tale--love, they typically also demonstrate great awareness of its transience, its maddening let-downs and instability. The most cynical quotations, which (I admit) are well-exemplified here, may perhaps have been written by those who loved--and lost. But win or lose, who could deny that romantic love is life's most spectacular adventure? Ten largest North American anime conventions of 2009 - AnimeCons News News Report January 12, 2010 Ten largest North American anime conventions of 2009 by Patrick Delahanty, AnimeCons.com Senior Editor

20 Badass Famous Last Words Some of the grandest, most controversial men in history have ended their lives with a poignant, biting farewell. Some laugh at death, others laugh at their killers, still others offer a culminating statement of wisdom. These colorful individuals ensured their fateful last words eloquently summarized their existences. All That Is Humor & humor OC Comic Idea Can you learn how to be happy? You first learn Humor and funny. To be a funny person, you have to look funny. It is easy. Some examples in our blog tells you how to do this. Collected Quotes from Albert Einstein [Note: This list of Einstein quotes was being forwarded around the Internet in e-mail, so I decided to put it on my web page. I'm afraid I can't vouch for its authenticity, tell you where it came from, who compiled the list, who Kevin Harris is, or anything like that. Still, the quotes are interesting and enlightening.]

Shift_JIS art An example of American Shift_JIS art. Giko Neko(ギコネコ, gikoneko?) Posted on the BBSHONTEN(HIRU NO BU)(本店（昼の部）, honten(hirunobu)?) in 1998. Shift_JIS art (Shift_Japanese Industrial Standards art) is artwork created from characters within the Shift JIS character set, a superset of ASCII intended for Japanese usage. Naturally there are many similarities between Shift_JIS artwork and ASCII art. Earth Day Quotes, World Environment Day Sayings Related Quotes Environment Helping Arbor Day Car-Free Nature Every day is Earth Day. ~Author Unknown I conceive that the land belongs to a vast family of which many are dead, few are living, and countless numbers are still unborn. Forgotten Bookmarks Typed poem titled "Abraham Lincoln." With a little searching, I discovered it's by Charles Monroe Dickinson. This paper doesn't have the complete poem, I'll reproduce it in its entirety: Found in "Cyrano de Bergerac" by Edmond Rostand. Published by Hurst, 1907. There was an amusing inscription in the book:

Advice from Somewhere ONE. Give people more than they expect and do it cheerfully. TWO. Marry a man/woman you love to talk to.

Easy to use and sorted by category. by tammster Oct 17