Shakespeare Insults: A collection of quotes for you blocks, you stones, you worse than senseless things! 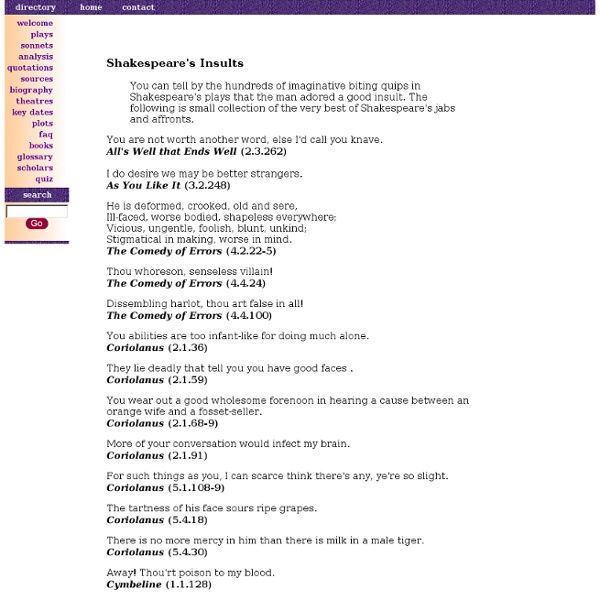 Shakespeare's Insults You can tell by the hundreds of imaginative biting quips in Shakespeare's plays that the man adored a good insult. The following is small collection of the very best of Shakespeare's jabs and affronts. You are not worth another word, else I'd call you knave.All's Well that Ends Well (2.3.262) I do desire we may be better strangers.As You Like It (3.2.248) He is deformed, crooked, old and sere, Ill-faced, worse bodied, shapeless everywhere; Vicious, ungentle, foolish, blunt, unkind; Stigmatical in making, worse in mind. Thou whoreson, senseless villain! Dissembling harlot, thou art false in all! You abilities are too infant-like for doing much alone. They lie deadly that tell you you have good faces . You wear out a good wholesome forenoon in hearing a cause between an orange wife and a fosset-seller. More of your conversation would infect my brain. For such things as you, I can scarce think there's any, ye're so slight. Away! O thou vile one! Take you me for a sponge?

The Pursuit of Happiness Welcome to the happiness frenzy, now peaking at a Barnes & Noble near you: In 2008 4,000 books were published on happiness, while a mere 50 books on the topic were released in 2000. The most popular class at Harvard University is about positive psychology , and at least 100 other universities offer similar courses. Happiness workshops for the post-collegiate set abound, and each day "life coaches" promising bliss to potential clients hang out their shingles. In the late 1990s, psychologist Martin Seligman of the University of Pennsylvania exhorted colleagues to scrutinize optimal moods with the same intensity with which they had for so long studied pathologies: We'd never learn about full human functioning unless we knew as much about mental wellness as we do about mental illness. It wasn't enough that an array of academic strands came together, sparking a slew of insights into the sunny side of life. But all is not necessarily well. Happiness is not about smiling all of the time.

Chuck Wendig, Freelance Penmonkey | Chuck Wendig: Freelance Penmonkey 100 Exquisite Adjectives By Mark Nichol Adjectives — descriptive words that modify nouns — often come under fire for their cluttering quality, but often it’s quality, not quantity, that is the issue. Plenty of tired adjectives are available to spoil a good sentence, but when you find just the right word for the job, enrichment ensues. Practice precision when you select words. Here’s a list of adjectives: Subscribe to Receive our Articles and Exercises via Email You will improve your English in only 5 minutes per day, guaranteed! 21 Responses to “100 Exquisite Adjectives” Rebecca Fantastic list! Collected Quotes from Albert Einstein [Note: This list of Einstein quotes was being forwarded around the Internet in e-mail, so I decided to put it on my web page. I'm afraid I can't vouch for its authenticity, tell you where it came from, who compiled the list, who Kevin Harris is, or anything like that. Still, the quotes are interesting and enlightening.] "Any intelligent fool can make things bigger, more complex, and more violent. It takes a touch of genius -- and a lot of courage -- to move in the opposite direction." "Imagination is more important than knowledge." Copyright: Kevin Harris 1995 (may be freely distributed with this acknowledgement)

Kurt Vonnegut at the Blackboard Voices in Time I want to share with you something I’ve learned. I’ll draw it on the blackboard behind me so you can follow more easily [draws a vertical line on the blackboard]. This is the G-I axis: good fortune-ill fortune. This is the B-E axis. Now let me give you a marketing tip. Another is called “Boy Meets Girl,” but this needn’t be about a boy meeting a girl [begins drawing line B]. Now, I don’t mean to intimidate you, but after being a chemist as an undergraduate at Cornell, after the war I went to the University of Chicago and studied anthropology, and eventually I took a masters degree in that field. One of the most popular stories ever told starts down here [begins line C below B-E axis]. There’s to be a party at the palace. And when she shows up she’s the belle of the ball [draws line upward]. Now there’s a Franz Kafka story [begins line D toward bottom of G-I axis]. It’s a pessimistic story. His father has just died. Well, was this good news or bad news?

The Secrets of Happiness Forget about money. Don't fret about youth. Acting happy is likely to make you happy. There are happy people. What makes for a happy disposition? I: Self-esteem : Happy People Like Themselves During the 1980s, no topic in psychology was more researched than the self. This will come as no surprise to anyone attuned to the pop psychology of our age. Actually, most of us have a good reputation with ourselves. Moreover, one of the most provocative yet firmly established conclusions of social psychology concerns the potency of "self-serving bias ." On nearly any subjective or socially desirable dimension, most people actually see themselves as better than average. A healthy self-esteem, then, is both positive and realistic. II: Optimism : Happy People Are Hope-Filled Those who agree that "with enough faith , you can do almost anything" and that "when I undertake something new, I expect to succeed" may be a bit bubble-headed. Optimists are also healthier. Optimists also enjoy greater success.

8 Books For a Higher Existence Books are magical inventions. By carrying meaning, they gives us glimpses of experience and knowledge from a different world. Phonetic language, being cut-off from time and place, the Now, helps both to encapsulate the ego more, but also to offer guidance to make it poriferous, letting Eros free. Without books we would lose this guidance. And in these times of dire ecological and cultural crisis, we need new ways to respond to the ecosystem that we simultaneous are and are imbedded in. If you’re done reading this list and want to level up more – check out part two! Thus Spoke Zarathustra – Friedrich Nietzsche Thus Spoke Zarathustra is Nietzsche’s most prophetic book in which he offers his teachings through the words of Zarathustra, based on the Persian prophet Zoroaster, who, after spending ten years on a mountain in meditation only accompanied by his Eagle and Serpent, comes down to offer his wisdom to the world. Becoming Animal – David Abram The Story of B – Daniel Quinn

Ink - Quotes about writing by writers presented by The Fontayne Group Writing "I put a piece of paper under my pillow, and when I could not sleep I wrote in the dark." Henry David Thoreau "Writing is an adventure." Winston Churchill "Know something, sugar? Stories only happen to people who can tell them." Allan Gurganus "... only he is an emancipated thinker who is not afraid to write foolish things." Anton Chekhov "A poet is someone who stands outside in the rain hoping to be struck by lightening." "Whether or not you write well, write bravely." "The first rule, indeed by itself virtually a sufficient condition for good style, is to have something to say."