The most beautiful death 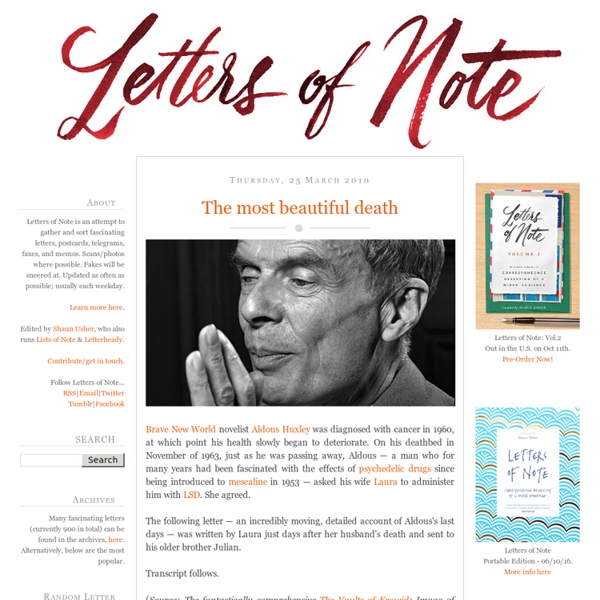 Brave New World novelist Aldous Huxley was diagnosed with cancer in 1960, at which point his health slowly began to deteriorate. On his deathbed in November of 1963, just as he was passing away, Aldous — a man who for many years had been fascinated with the effects of psychedelic drugs since being introduced to mescaline in 1953 — asked his wife Laura to administer him with LSD. She agreed. The following letter — an incredibly moving, detailed account of Aldous's last days — was written by Laura just days after her husband's death and sent to his older brother Julian. Transcript follows. 6233 Mulholland Highway Los Angeles 28, California December 8, 1963Dearest Julian and Juliette:There is so much I want to tell you about the last week of Aldous' life and particularly the last day.

A Terrific 2012: Top 15 Inspirational Pictures to Start New Year on a Positive Note There are times when life punches down everybody. But Rocky isn’t the only one who can get back up again. With the right amount of inspiration, you can soldier on, no matter how tough things get. To help you out, we’re sharing 10 inspirational picture-quotes below. Check them out. We recommend drinking green tea simultaneously.

Fiction Truer Than Fact: A Haunting Autobiographical Novel Sarah Manguso's latest book is called The Guardians. I like autobiographies that approach their subjects insidiously. My favorite ones begin as a study of someone or something else. Sylvia grew from an autobiographical essay into a novella subtitled A Fictional Memoir. "The brush swept down and ripped free until, abruptly, she quit brushing, stepped into the living room, dropped onto the couch, leaned back against the brick wall, and went totally limp. The woman is Sylvia Bloch, indeed the name of the author's first wife, described in the book as "abnormally bright" but prone to violent rages, "like a madwoman imitating a college student." Leonard presents the compulsive love affair alongside his own compulsive record of it. hide captionSarah Manguso is also the author of The Two Kinds of Decay. Courtesy Farrar, Straus & Giroux Sarah Manguso is also the author of The Two Kinds of Decay. Though the book contains more rumination than plot, the ending is as shocking as that of any thriller.

131 – US States Renamed For Countries With Similar GDPs | Strange Maps by Frank Jacobs Gross Domestic Product (GDP) is a convenient way of measuring and comparing the size of national economies. Annual GDP represents the market value of all goods and services produced within a country in a year. Put differently: GDP = consumption + investment + government spending + (exports – imports) Although the economies of countries like China and India are growing at an incredible rate, the US remains the nation with the highest GDP in the world – and by far: US GDP is projected to be $13,22 trillion (or $13.220 billion) in 2007, according to this source. The creator of this map has had the interesting idea to break down that gigantic US GDP into the GDPs of individual states, and compare those to other countries’ GDP. Pakistan, for example, has a GDP that’s slightly higher than Israel’s – but Pakistan has a population of about 170 million, while Israel is only 7 million people strong. This map was suggested by Morgan via strangemaps@gmail.com, and can be found here.

How to Remove Your Google Search History Before Google's New Privacy Policy Takes Effect [UPDATE 2/22/2012] It is important to note that disabling Web History in your Google account will not prevent Google from gathering and storing this information and using it for internal purposes. More information at the end of this post. On March 1st, Google will implement its new, unified privacy policy, which will affect data Google has collected on you prior to March 1st as well as data it collects on you in the future. Until now, your Google Web History (your Google searches and sites visited) was cordoned off from Google's other products. This protection was especially important because search data can reveal particularly sensitive information about you, including facts about your location, interests, age, sexual orientation, religion, health concerns, and more. Here's how you can do that: 1. 2. 3. 4. Note that removing your Web History also pauses it. If you have several Google accounts, you will need to do this for each of them.

The 100 Most Influential Books Ever Written (book) The 100 Most Influential Books Ever Written: The History of Thought from Ancient Times to Today (1998) is a book of intellectual history written by Martin Seymour-Smith, a British poet, critic, and biographer.[1] The list included the books such as, Upanishads, Hebrew Bible, I Ching, Kabbalah, Candide, The World as Will and Idea, among others. See also[edit] References[edit] Jump up ^ Seymour-Smith, Martin (1998). External links[edit] The list 100 questions for a better conversation Have you ever been at a party or on a blind date only to find yourself with nothing to say? It’s an awkward feeling; still no one is stepping up to ride the room of silence. Thankfully, you’ll never have to experience that situation again. Next time, all you’ll have to do is ask a question. The fine folks at The School of Life have created One Hundred Questions as a kind of conversation starter-kit. Topics include: Personality & EmotionsSex & RelationshipsFamily & FriendshipWork & MoneyTravel, Culture & TasteLife & Death One Hundred Questions | School of Life Who said that there had to be an absolute answer for each and every question?

Stoicism School of Hellenistic Greek philosophy Stoicism is a school of Hellenistic philosophy which was founded by Zeno of Citium, in Athens, in the early 3rd century BC. Stoicism is a philosophy of personal ethics informed by its system of logic and its views on the natural world. According to its teachings, as social beings, the path to eudaimonia (happiness) for humans is found in accepting the moment as it presents itself, by not allowing oneself to be controlled by the desire for pleasure or fear of pain, by using one's mind to understand the world and to do one's part in nature's plan, and by working together and treating others fairly and justly. Stoicism flourished throughout the Roman and Greek world until the 3rd century AD, and among its adherents was Emperor Marcus Aurelius. Name[edit] Stoicism was originally known as ‘Zenonism’, after the founder Zeno of Citium. Sometimes Stoicism is therefore referred to as just ‘The Stoa’, or the philosophy of ‘The Porch’.[5] Basic tenets[edit]

How I Outgrew Libertarianism I was a Libertarian in college. I even volunteered for the 1980 Ed Clark/David Koch (yes, that David Koch) Libertarian party presidential campaign. As promised, the following is the story of how I outgrew Libertarianism. 1. Furthermore, real Libertarianism isn't socio-economic Darwinism. "Let the most ruthless grab all the gold, and hope someone patches up the wounded later" didn't strike me as a cause I could get behind. 2. But every century or so eggheads proclaim some smug new utopian plan (which always sounds great on paper) destined to create a permanent steady state of prosperity and happiness. 3. I envisioned myself in such a scenario, making decisions, expending energy, and using my resourcefulness to compete. Here's the problem with "thinking it all through": You may have been following my series, "Bubbles, Slogs, and Selling Out", the story of how I sold Chowhound to CNET (now CBS). None of those things were true of the people around me.

totally on purpose Brave New World by Aldous Huxley Chapter One A SQUAT grey building of only thirty-four stories. Over the main entrance the words, CENTRAL LONDON HATCHERY AND CONDITIONING CENTRE, and, in a shield, the World State's motto, COMMUNITY, IDENTITY, STABILITY. The enormous room on the ground floor faced towards the north. "And this," said the Director opening the door, "is the Fertilizing Room." Bent over their instruments, three hundred Fertilizers were plunged, as the Director of Hatcheries and Conditioning entered the room, in the scarcely breathing silence, the absent-minded, soliloquizing hum or whistle, of absorbed concentration. "Just to give you a general idea," he would explain to them. "To-morrow," he would add, smiling at them with a slightly menacing geniality, "you'll be settling down to serious work. Meanwhile, it was a privilege. Tall and rather thin but upright, the Director advanced into the room. "Bokanovsky's Process," repeated the Director, and the students underlined the words in their little notebooks. Mr.