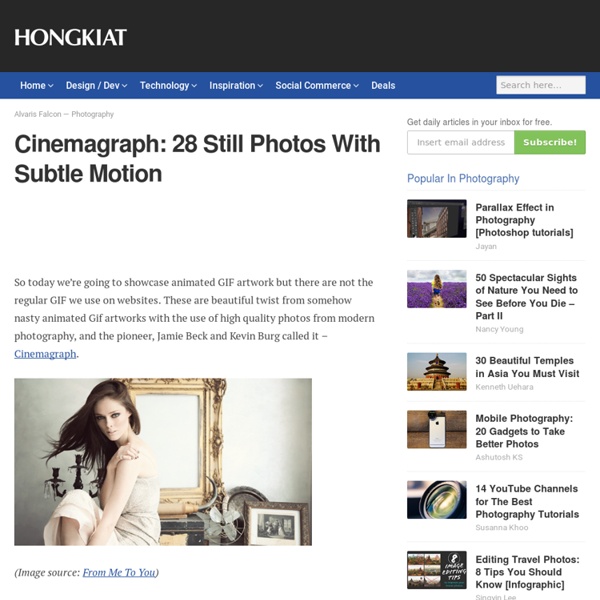 So today we’re going to showcase animated GIF artwork but there are not the regular GIF we use on websites. These are beautiful twist from somehow nasty animated Gif artworks with the use of high quality photos from modern photography, and the pioneer, Jamie Beck and Kevin Burg called it – Cinemagraph. (Image source: From Me To You) Like what you’ve seen in most GIF animation, cinemagraph is a product of still photo with minor elements moving on. Dozens of photographers have found this technique interesting, so do we. Recommended Reading: More Cinemagraphs: 32 Still Photos With Subtle Movements 28 Inspiring Cinemagraphs A Wonderful World. Can You Smell Them? Cheers. Coco Takes Manhattan. Delicious Bacon. Endless Time. Have A Bubbly Weekend! Have An Adventurous Weekend. He Swept Her Away. How He Passed The Time. Infinite Coke. It’s My Birthday. Joel Naughgle Of Devil At My Doorstep. Laypark. Meet Me At The Bar. Mouse Is Always Busy. Paint It On. Prabal’s Beauty. Reading Newspaper. Yuki.

How to Make Cinemagraphs — Still Photos that Move Like Movies! Yup, that picture moves. Nope, you’re not going crazy! ‘Cause who said photos can only feature “still” life? Inspired by the moving pictures created by photographer and motion designer duo Jamie Beck and Kevin Burg, we set out to make the magic happen. Make your pictures move like ours did with a some Photoshop magic! Make DIY Moving Photos! What Makes ‘Em Move? Photos can show movement when made into GIFs. GIFs stand for Graphics Interchange Format, and it’s a bitmap image format that supports animation. This magical movement hit the world wide web in the late eighties, so it’s nothing new. Then came along Jamie Beck and Kevin Burg. So celebrate the smooth comeback of GIFs by making your own photos join the movement! List of Ingredients: A camera that can shoot videoA tripodIdeas for scenes to make into a cinemagraph! STEP 1: Scheming your Scene First, plan out a scene you would like to record. For your first round of cinemagraphs, try to keep it simple. Some helpful hints & tips: Huzzah!

Cinemagraphs About Cinemagraphs are partially animated photographs in which a subtle movement action occurs. The effect is produced by taking a series of continuous shot photographs or a video recording and compositing the frames into an animated GIF file. Origin Prior to the introduction of cinemagraph, similar animated GIFs were posted to the Three Frames Tumblr blog as early as April 30th, 2009. The first known animated GIF to use cinemagraph techniques like masking and looping was posted via the Tumblr blog “If We Don’t, Remember Me” on October 30th, 2010. Coinage The term “cinemagraph” was coined on March 19th, 2011 by New York fashion photographer Jamie Beck and graphic designer Kevin Burg, who posted the first cinemagraphs titled “les tendrils” on their “From Me to You” Tumblr blog on Februfary 13th, 2011. Spread On April 16th, 2011, articles about cinemagraphs on Tumblr were posted to the art blog An Aesthetic Discourse, and Daily Picks and Flicks. iPhone Apps Notable Examples Search Interest

How To Make a Cool Cinemagraph Image in Photoshop No doubt you’ll have heard of the term Cinemagraph since it exploded onto the Internets. Originally coined by Photographers Kevin Burg and Jamie Beck, a cinemagraph is a clever revival of the classic animated GIF. It combines features of video and photography to create a the illusion of a still image but with cool motion effects. Let’s take a look at how to create your own animated GIF cinemagraph by playing around with Photoshop’s animation tools. Some of the best cinemagraph examples can be found on the creators’ own website. Their original cinemagraphs from New York Fashion Week capture moments just like an ordinary photograph, but also preserve that living moment in time to re-experience endlessly. As the popularity of the cinemagraph grew we began to see mobile apps such as Cinemagram emerge, which allows the easy creation of amateur cinemagraphs using the device’s built in camera. Use a tripod. Alternatively you could always play around with existing stock video footage.