Province: Cyrodiil. I've been asked to post this, so here it is. 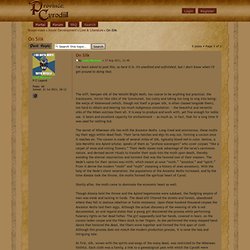 It's unedited and unfinished, but I don't know when I'll get around to doing that. The stiff, hempen silk of the Velothi Blight Moth, too coarse to be anything but practical; the translucent, mirror-like silks of the Summurset, too costly and taking too long to sing into being; the weija of Valenwood (which, though not itself a proper silk, is often classed longside them), too hard to obtain and bearing too much indigenous connotation -- the beautiful and versatile silks of the Niben outclass them all. It is easy to produce and work with, yet fine enough for noble use. It bears and excellent capacity for enchantment -- so much so, in fact, that for a long time it was used for nothing but.

Tsaesci Creation Myth- An Attempted Deciphering : teslore. Elder Scrolls Forum: Mnemoli's Gate, The Hurling Disk. Hmmm, I feel like a babe amongst the giants by posting this but, here is my working attempt at a Formal Research Fellowship. 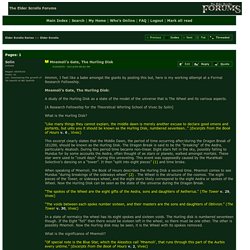 The Imperial Library. 36 Lessons of Vivec. You have discovered the sixth Sermon of Vivec, which was hidden in the words that came next to the Hortator. 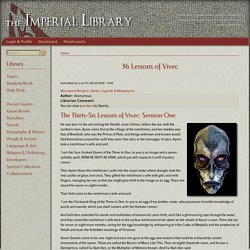 There is an eon within itself that when unraveled becomes the first sentence of the world. Mephala and Azura are the twin gates of tradition and Boethiah is the secret flame. The Sun shall be eaten by lions, which cannot be found yet in Veloth. Six are the vests and garments worn by the suppositions of men. Proceed only with the simplest terms, for all others are enemies and will confuse you. Scripture of the Numbers. The Scripture of the Numbers: 1. 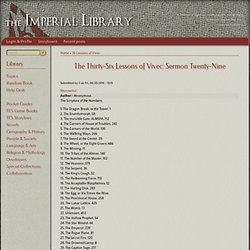 The Dragon Break, or the Tower. 1 2. The Enantiomorph. 68 3. The Invisible Gate, ALMSIVI. 112 4. The Corners of House of Troubles. 242 5. Obscure Texts. Skeleton Man's Interview with Denizens of Tamriel. Greetings! 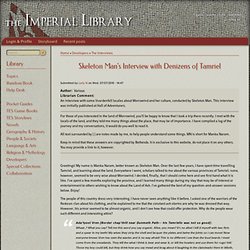 My name is Manka Naram, better known as Skeleton Man. Over the last few years, I have spent time travelling Tamriel, and learning about the land. Everywhere I went, scholars talked to me about the various provinces of Tamriel; none, however, seemed to be very wise about Morrowind. I decided, finally, that I should come here and see first hand what it is like. I've spent a few months exploring the province, and I learned many things during my stay that may be of interest or entertainment to others wishing to know about the Land of Ash.

The people of this country dress very interesting, I have never seen anything like it before. Ada'tyool Vren [Border chap'thiil near Dunmeth Path-- his Tamrielic was not so good]: Whaat..? Everywhere I go, I see people riding large crab-like creatures that I have seen no where else. Morrowind seems to rely heavily on slavery, imprisoning almost every race in Tamriel. It is said that the Chimer were precursors to the Dark Elves. Final Report to Trebonius. To the esteemed Archmage and Guildmaster of Vvardenfell, Trebonius Artorius This will be my final contact with you on the issue of the Disappearance of the Dwarves, a mission that you sent me on some time ago. 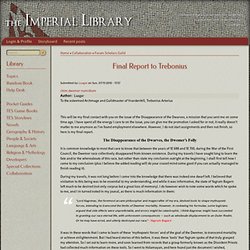 I have spent all the energy I care to on the issue, you can give me the promotion I asked for or not, it really doesn’t matter to me anymore as I’ve found employment elsewhere. However, I do not start assignments and then not finish, so here is my final report. Parabolic Kalpa. This is probably not suitable for the FSG, but I'm posting it for posterity. 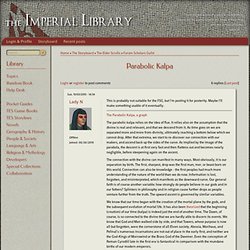 Maybe I'll make something usable of it eventually. The Illusion of Death[ESO in-game text] : teslore. The Interviews. 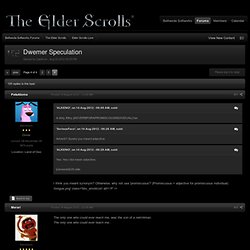 Demystifying the Dwemer [1] - “It was unfashionable among the Dwemer to view their spirits as synthetic constructs three, four, or forty creational gradients below the divine. Dwemer Alloy is made of... - Page 2. Pshaw, the Betrayed were worthy only of being put to work mining soul gems and Aetherium and having their souls harvested to be put to use in the soul matrices of animunculi. 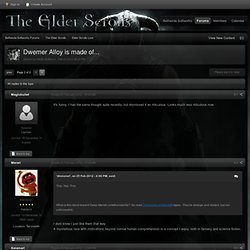 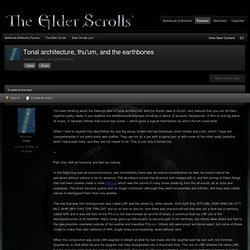 If Nirn is one big piece of music, it naturally follows that sound has power -- which gives a logical mechanism by which thu'um could work. When I tried to explore this idea further my one big essay turned into two extremely short stories and a list, which I hope are comprehensible if not particularly well-crafted. They are not on a par with in-game text or with some of the other really beautiful work I have seen here, and they are not meant to be. This is just how it turned out.

Part One: NIR as harmony and Nirn as melody In the beginning was all-sound-existence, and immediately there was all-silence-nonexistence as well, for sound cannot be perceived without silence to be its absence. Part Two: Thu'um and tonal architecture as perturbation 1. 2. 3. 4.