Cyclists Rejoice: PumpTire Is the World's First Self-Inflating Bicycle Tire. Where has this invention been all our lives? 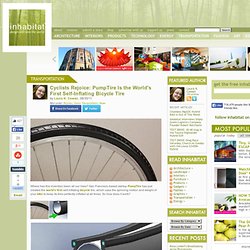 San Francisco-based startup PumpTire has just created the world’s first self-inflating bicycle tire, which uses the spinning motion and weight of your bike to keep its tires perfectly inflated at all times. So how does it work? The PumpTire product consists of a tube, a bicycle tire, and a valve. Slidepad - Intelligent Brake Distribution for Bikes. Bicycle Tires and Tubes. Search sheldonbrown.com and sheldonbrown.org Bicycle Tires and Tubes. 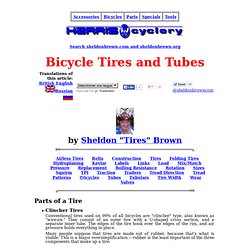 BriTek's Brilliant Airless Bicycle Tire Reinvents the Wheel. Flat bicycle tires could be a thing of the past thanks to BriTek‘s amazing new Energy Return Wheel. 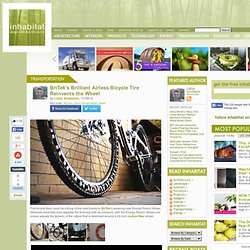 Whereas most bike tires regulate tire firmness with air pressure, with the Energy Return Wheel one simply adjusts the tension of the rubber that is stretched around a 29-inch carbon fiber wheel. Initially tested on cars, the airless tire is comprised of two layers of rubber – one at the center, stretched and held by adjustable rods, and the other on the outside. The space between, usually filled with air, holds a series of elastic cushions. The internal scaffolding of rods and cushions allow the tire go give and, according to Britek, react better to compression.

As the internal rubber layer gets compressed by bumps from the road, the elastic potential energy stored within the wheel is returned and converted into forward momentum. + Energy Return Wheel Via NBC News. Bicycle Tires and Tubes. Bicycle Tires and Tubes. Slidepad - Intelligent Brake Distribution for Bikes. If you want a big hot rod hubmotor, you need moped rims. If you want to rock a ton of amps in a hot-rod hubmotor street monster for the kind of sweet hard acceleration that can embarrass an expensive sports car, the latest trend is to mount the hubbie into a rear wheel that uses Moped rims and tires. 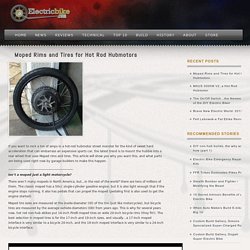 This article will show you why you want this, and what parts are being used right now by garage builders to make this happen. Isn’t a moped just a light motorcycle? There aren’t many mopeds in North America, but…in the rest of the world? There are tens of millions of them. The classic moped has a 50cc single-cylinder gasoline engine, but it is also light enough that if the engine stops running, it also has pedals that can propel the moped (pedaling first is also used to get the engine started). Moped tire sizes are measured at the inside-diameter (ID) of the tire (just like motorcycles), but bicycle tires are measured by the average outside-diameters (OD) from years ago. There is a difference between moped parts and light motorcycle parts. Pinarello and Jaguar create soft-riding road bike - Images.

The Fastest Pedal Ride in The World. Smartphone microscope lens that costs just pennies to make. Microscopes can be expensive pieces of gear, making access difficult – or non-existent – for students and medical staff in isolated and poorer locales. 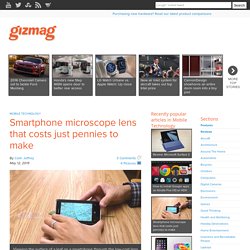 To help address this, researchers at the University of Houston (UH) have fashioned a lens designed to fit on almost any smartphone. It has the ability to magnify images up to 120 times their original size, and at an estimated production cost of just three cents per lens. Attaching directly to a smartphone lens without the requirement of extra mounts or accessories, the researchers say the new lens is so easy to use that it is ideal for even younger students. It also has obvious medical uses, and could provide small or isolated clinics with the ability to share images with specialists located elsewhere. Standard lenses are generally made by polishing glass or molding plastics to create a particular focal length and magnification. "A microscope is much more versatile, but of course, much more expensive," says Sung. Taipei International Cycle Show-Products List. Alter Cycles. Cyclists Rejoice: PumpTire Is the World's First Self-Inflating Bicycle Tire. 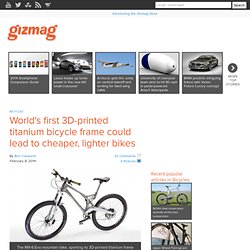 Unfortunately, those frames are also quite expensive. They could be about to come down in price, however – two British companies recently teamed up to create the world's first 3D-printed titanium bike frame. Renishaw, an additive manufacturing firm, joined forces with Empire Cycles to build the one-off titanium MX-6 Evo mountain bike.

The frame was built using an AM250 laser melting machine manufactured by Renishaw. Because titanium has a higher density than aluminum, less of it had to be used if Empire wanted a finished bike that was lighter than the stock model. As a result, at a total of 1,400 grams (3 lb), the finished Evo frame weighs 33 percent less than its aluminum counterpart. So, how could this project lead to cheaper titanium frames? Your next bike could be made from folded sheet metal - Images. Go into any bicycle store, and pretty much all of the bikes in there will have frames made from metal tubes or carbon fiber. A few manufacturers have gotten a bit more adventurous, offering frames made of bamboo or wood, while some have even experimented with things like aramid panels and nylon.

A trio of San Francisco-based entrepreneurs, however, have created a prototype bicycle using yet another frame material – hand-folded sheet metal. They claim that their product is lighter, stronger and cheaper to produce than an aluminum-tube frame, and they’re hoping to be able to sell you one. View all Rob, Mark and Andy are three mechanical engineers, who make up the company known as Ronin Metal Masters. After some experiments using heavy stock paper, the current prototype was built out of 0.024 inch (0.6 mm)-thick 6061-T6 aluminum. While the frame certainly has a unique “iron bridge” look to it, the choice of material goes beyond aesthetics.

Luna – Easy Going Cruiser Electric Bicycle. Centinel Wheel makes bikes into e-bikes. If you'd like the ease of an electric bicycle but don't want to give up your perfectly good "manual" bike, there is something you can do – you can replace your bike's existing rear wheel with the electrically-powered Copenhagen Wheel or FlyKly, or replace its front wheel with the Omni Wheel. 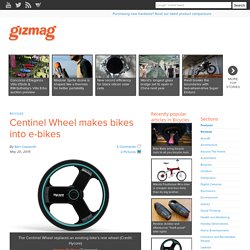 Those three products may soon have to make room for another competitor, however, as the Centinel Wheel enters the marketplace.