Folk Lore and Tales of the Fae

Australian Songlines. Sprawled across the Australian continent lies a network of invisible pathways known to the aborigine as ‘Footprints of the Ancestors’. 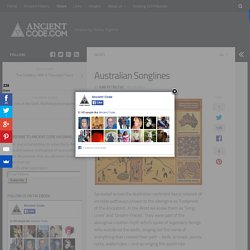 In the West we know them as ‘Song Lines’ and ‘Dream-Tracks’. They were part of the aboriginal creation myth which spoke of legendary beings who wandered the earth, singing out the name of everything that crossed their path – birds, animals, plants, rocks, waterholes – and so singing the world into existence. Each tribe had their own songline, passed down to them by their ancestors.

It was their responsibility to preserve these sacred chants and follow the laws and traditions contained within. They had a duty to protect their songlines, for an unsung territory eventually became a wasteland. A songline also acts as a map and compass. Yggdrasil nine worlds. Vilnius, a Dog has the Right to be a Dog. Early in the morning we bid a sad farewell to Ola and John, our most gracious Workaway hosts in northern Poland, and prepared ourselves for the two week tour ahead that would swiftly sweep us into the unknown. 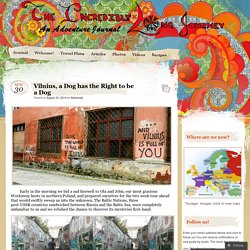 The Baltic Nations, three post-USSR countries sandwiched between Russia and the Baltic Sea, were completely unfamiliar to us and we relished the chance to discover its mysteries first-hand. It was only a short bus ride from the Polish/Lithuanian border to the capital city of Vilnius. Upon entering we were greeted with a strange mixture of debilitated buildings and historical wonders. Sweating profusely in the midday sun whilst shouldering cumbersome backpacks of non-essentials, we tottered along a confusing highway, stumbled down a cobblestone path into a patch of woods, awkwardly asked a native Lietuvis for directions, and at last found our place: The Downtown Forest Hostel. So what if it only got two stars on Trip Advisor? Dear Guest! The Orthodox Church of St.

St. Like this: Icelandic Myths and Creatures. Iceland was settled by the Scandinavians in 874 AD by adventurous people fleeing civil strife and over-population of the home states. 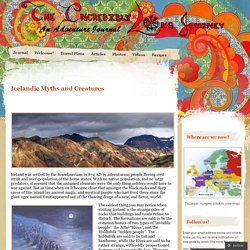 With no native population, and no large predators, it seemed that the untamed elements were the only thing settlers would have to war against. Huldufólk - Iceland's Belief in Elves. Iceland was settled by the Norse in the 9th Century. 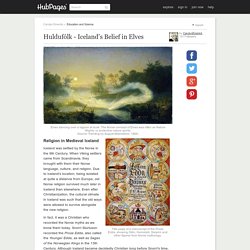 When Viking settlers came from Scandinavia, they brought with them their Norse language, culture, and religion. Due to Iceland's location, being isolated at quite a distance from Europe, old Norse religion survived much later in Iceland than elsewhere. Huldufólk. You may be used to read a lot of jokes here and there. 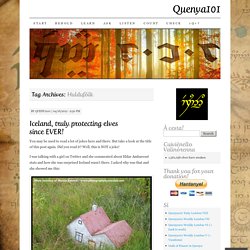 But take a look at the title of this post again. Did you read it? Well, this is NOT a joke! I was talking with a girl on Twitter and she commented about Eldar Ambaressë stats and how she was surprised Iceland wasn’t there. I asked why was that and she showed me this: The Huldufólk of Iceland. The Huldufolk, literally meaning “hidden people,” are a group of elusive elves, goblins, and trolls found in much of Icelandic folklore. 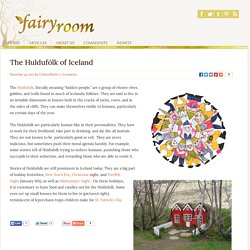 They are said to live in an invisible dimension in houses built in the cracks of rocks, caves, and in the sides of cliffs. They can make themselves visible to humans, particularly on certain days of the year. The Huldufolk are particularly human-like in their personalities. They have to work for their livelihood, take part in drinking, and die like all mortals. They are not known to be particularly good or evil. Elves ( Huldufólk )

Fairy Folk Tales of the Maori — Introduction — Maori Legends of the “Patu-paiarehe.” Page break A New Zealand poet once lamented the dearth of fairy lore in these islands, and in his ignorance made complaint: Why have we in these isles no fairy dell, No haunted wood, nor wild enchanted mere? 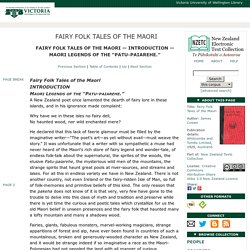 He declared that this lack of faerie glamour must be filled by the imaginative writer—“The poet's art—as yet without avail—must weave the story.” Folktexts: A library of folktales, folklore, fairy tales, and mythology, page 2. Huldufólk. See Huldra for general folklore on these beings across Scandinavia Huldufólk (Icelandic hidden people[1] from huldu- "pertaining to secrecy" and fólk "people", "folk") are elves in Icelandic folklore.[2][3] Building projects in Iceland are sometimes altered to prevent damaging the rocks where they are believed to live.[4][5][6][7][8] According to these Icelandic folk beliefs, one should never throw stones because of the possibility of hitting the huldufólk.[9] Icelandic gardens often feature tiny wooden álfhól (elf houses) for elves/hidden people to live in.[10] Some Icelanders have also built tiny churches to convert elves to Christianity.[11] President Ólafur Ragnar Grímsson has explained the existence of huldufólk tales by saying: "Icelanders are few in number, so in the old times we doubled our population with tales of elves and fairies. 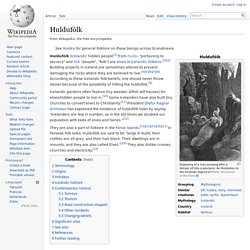