How Do You Play Games 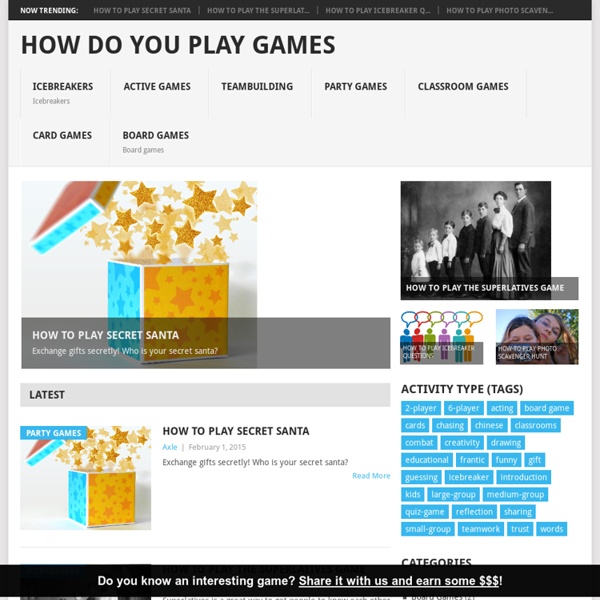 360° Aerial Panoramas, 3D Virtual Tours Around the World, Photos of the Most Interesting Places on the Earth 5 great zero preparation lesson ideas When the pressure is on and there are only so many hours on the week, you need a repertoire of zero preparation go-to activities which promote input and/or practice. Here are five you might well find useful. 1. My weekend We know that listening is the most important yet often neglected skill for language learning. It's also something some pupils find hard to do. You tell the class you are going to recount what you did last weekend and that they have to make notes in English. You then make some true or false (maybe not mentioned too) statements in the target language about what you said in your account. 2. Pupils work in small groups. This is definitely an "output" task but one which can encourage students to speak fearlessly with an ear on fluency rather than accuracy. 3. For intermediate to advanced level. You can ask the class how many of the statements they think are false. Let the students ask questions until they have decided which ones they believe (by a show of hands). 4. 5.

Larry Ferlazzo - Online tools These include The Best Web Tools For English Language Learners (In Other Words, The Ones My Students Regularly Use) and The Best Beginner, Intermediate & Advanced English Language Learner Sites. Now, though, I think it's time to narrow them down to my choices for the "best of the best" or, in other words, an "All-Time Best" list. Here are my choices, and I hope readers will let me know if they agree, disagree, and/or think I've missed some (one key requirement is that they are all free to use). Some of the sites I list could go in multiple categories, but I have placed them in the "domains" I believe they help the most: Obviously, The British Council has tons of great resources. I particularly like their animated Short Stories. I'm obviously biased, but I think the weekly student interactives I create for The New York Times are very useful to English Language Learners. The Reading and Everyday Life activities from GCF LearnFree are excellent. Mrs.

Blog | BrainBox Wed 15 June 2016 Continental Contrivances Europe has been high on the news agenda for weeks now, which started us thinking – of all the things we in Britain take for granted today, which can we trace back to our continental neighbours? Wed 11 May 2016 Awesome African Adventures What do the king of the beasts, the biggest land mammal in the world and man’s largest living relative have in common? Thu 07 April 2016 “I’m not naughty – I’m autistic” How can you tell the difference between a naughty child and a child with an Autistic Spectrum Condition? Thu 03 March 2016 What Disney princesses teach our children Disney is as inescapable today as it was when we were young. Thu 05 November 2015 “When life gives you lemons…” From missing out on the school team to being told off by a favourite teacher, things at school don’t always go as planned.