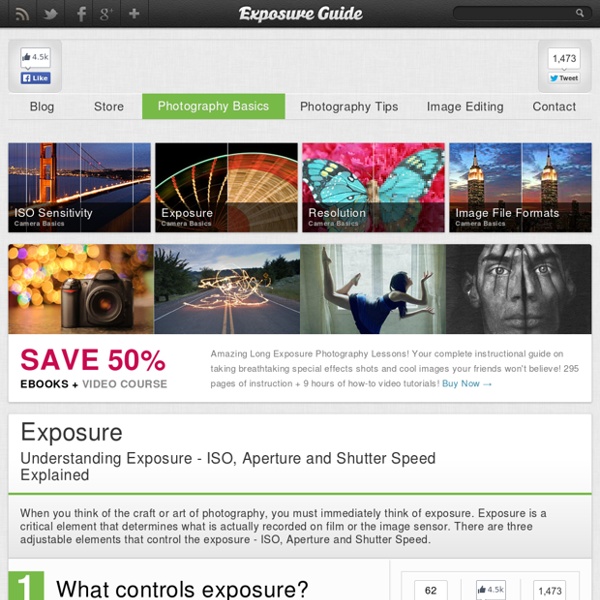 What controls exposure? ISO ratings determine the image sensor’s sensitivity to light, each value of the rating represents a “stop” of light, and each incremental ISO number (up or down) represents a doubling or halving of the sensor’s sensitivity to light. The Aperture controls the lens’ diaphragm, which controls the amount of light traveling through the lens to the film plane. The aperture setting is indicated by the f-number, whereas each f-number represents a “stop” of light. The Shutter Speed indicates the speed in which the curtain opens then closes, and each shutter speed value also represents a “stop” of light. When these three elements are combined, they represent a given exposure value (EV) for a given setting. ISO Speed ISO is actually an acronym, which stands for International Standards Organization. Aperture A lens’s aperture is the opening in the diaphragm that determines the amount of focused light passing through the lens. Shutter Speed What is "Auto Bracketing"? Conclusion

blubbr - Play & create video trivia games Pictures, News Photos, Picture Slideshows & More | Reuters.com 20+ Cheatsheets & Infographics For Photographers We love cheatsheets as one can refer to them and make quick amendments to better our skills. Since many loved our last compilation of cheatsheet for designers, we’ve decided to compile another set of cheatsheets, this time for photographers. Amateur photographers, and even pros can easily benefit from these cheatsheets as it is a resource for fresh and new ideas. We’ve scoured the Web and have found a wide variety of cheatsheets covering various aspects of photography and catering to the many levels of skills and interest of anyone who calls themselves a photographer. Most of the pictures you see here are cropped for a nice fit, so remember to click on the links to check out the entire cheatsheet or infographic. Some of them are really long and can give you a ton of worthwhile information that you really can’t do without. Recommended Reading: Five Vital Black & White Photography Tips Focal Lengths Manual Photography 3 Ways to Affect Depth of Field Photography Cheatsheet 3 Elements of Exposure

FlowingData | Data Visualization, Infographics, and Statistics 360 Degree Aerial Panorama | 3D Virtual Tours Around the World | Photos of the Most Interesting Places on the Earth | AirPano.com Camera Modes | Understanding DSLR Camera Shooting Modes Auto Mode Automatic Exposure is when the camera chooses the optimum shutter speed, aperture, ISO and flash settings for your shot. All you need to do is point and shoot. This can be good if you have no idea of what settings to choose and also when you need to shoot quickly. The shot here is perfectly exposed as the day is well lit, though auto-exposure may struggle in situations where the light is uneven, and it tends to trigger the flash even when it’s not necessary. Portrait Mode Portrait mode will “think” that there is a subject in the foreground of the frame and choose a shallow depth of field in order to keep the human subject in focus but the background blurred. Macro Mode Macro mode is very useful to take a photograph of an image smaller than your hand. Landscape Mode Landscape mode usually uses a small aperture (high f/number) to create a well focused image from the foreground into the distance (on old style cameras, the setting was ‘infinity’ represented by a sideways figure 8).

Worksheets, Lesson Plans, Teacher Resources, and Rubrics from TeAch-nology.com World War I in Photos: Introduction - In Focus A century ago, an assassin, a Serbian nationalist, killed the heir to the throne of Austria-Hungary as he visited Sarajevo. This act was a catalyst that ignited a massive conflict that lasted for four years. More than 65 million soldiers were mobilized by more than 30 nations, with battles taking place around the world. Industrialization brought modern weapons, machinery, and tactics to warfare, vastly increasing the killing power of armies. Battlefield conditions were horrific, typified by the chaotic, cratered hellscape of the Western Front, where soldiers in muddy trenches faced bullets, bombs, gas, bayonet charges, and more. On this 100-year anniversary, I've gathered photographs of the Great War from dozens of collections, some digitized for the first time, to try to tell the story of the conflict, those caught up in it, and how much it affected the world. Use j/k keys or ←/→ to navigate Choose:

Inspire Me Now The Year in Pictures 2015 THIS was the year of the great unraveling, with international orders and borders challenged or broken, with thousands of deaths, vast flows of migrants and terrorist attacks on some of the most cherished symbols of civilization, both Western and Muslim. Palmyra and Paris (twice). Aleppo, Homs, Kobani and even San Bernardino, Calif. The conflict spurred the migrants lapping against the shores of bourgeois Europe, a million or more, huddled in small boats or crammed into airless trucks, abused by human traffickers, thousands dead on the journey, prompting both empathy and backlash. Just look. The outrages of Boko Haram and the Shabab in Africa. The ruins still in Gaza, a year after a brutal and inconclusive war, and Israel hunkering down in a region losing its compass. Even the Earth seemed slightly unhinged — the ice caps melting, sheep stuck in the smog of Beijing, huge snowstorms and floods, a major earthquake in Nepal, one of the world’s poorest countries.