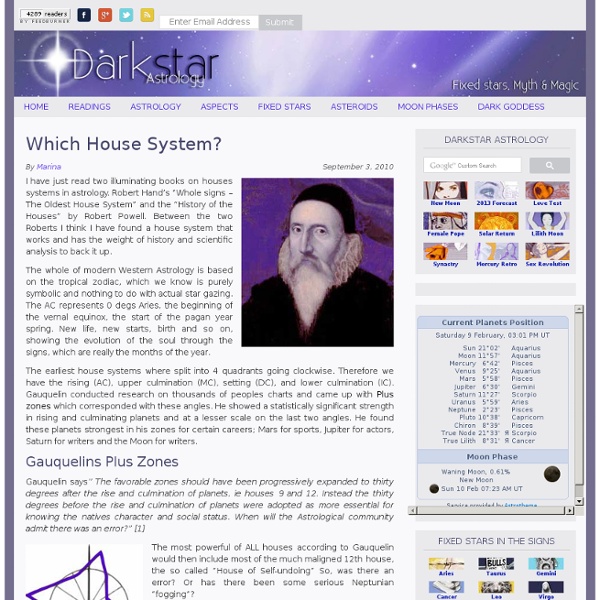 I have just read two illuminating books on houses systems in astrology. Robert Hand’s “Whole signs – The Oldest House System” and the “History of the Houses” by Robert Powell. Between the two Roberts I think I have found a house system that works and has the weight of history and scientific analysis to back it up. The whole of modern Western Astrology is based on the tropical zodiac, which is based on the seasons and nothing to do with actual star-gazing. The AC represents 0 degs Aries, the beginning of the vernal equinox, the start of the pagan year spring. The earliest house systems where split into 4 quadrants going clockwise. Gauquelins Plus Zones Gauquelin says” The favorable zones should have been progressively expanded to thirty degrees after the rise and culmination of planets, ie houses 9 and 12. The most powerful of ALL houses according to Gauquelin would then include most of the much maligned 12th house, the so called “House of Self-undoing” So, was there an error?

Chinese astrology Chinese astrology is based on the traditional astronomy and calendars. The development of Chinese astrology is tied to that of astronomy, which came to flourish during the Han Dynasty (2nd century BC to 2nd century AD). Chinese astrology has a close relation with Chinese philosophy (theory of the three harmony, heaven, earth and water) and uses the principles of yin and yang and concepts that are not found in Western astrology, such as the wu xing teachings, the 10 Celestial stems, the 12 Earthly Branches, the lunisolar calendar (moon calendar and sun calendar), and the time calculation after year, month, day and shichen (時辰). Background[edit] Chinese astrology was elaborated during the Zhou dynasty (1046–256 BC) and flourished during the Han Dynasty (2nd century BC to 2nd century AD). The 5 classical planets are associated with the Wu Xing: In addition to astrological readings of the heavenly bodies, the stars in the sky form the basis of many fairy tales. Luni-solar calendar[edit] [edit]

Zodiac The Earth in its orbit around the Sun causes the Sun to appear on the celestial sphere moving over the ecliptic (red), which is tilted with respect to the equator (blue-white). In both astrology and historical astronomy, the zodiac (Greek: ζῳδιακός, zōidiakos) is a circle of twelve 30° divisions of celestial longitude that are centered upon the ecliptic, the apparent path of the Sun across the celestial sphere over the course of the year. The paths of the Moon and visible planets also remain close to the ecliptic, within the belt of the zodiac, which extends 8-9° north or south of the ecliptic, as measured in celestial latitude. Because the divisions are regular, they do not correspond exactly to the twelve constellations after which they are named. Historically, these twelve divisions are called signs. §Usage[edit] §History[edit] §Early history[edit] Wheel of the zodiac: This 6th century mosaic pavement in a synagogue incorporates Greek-Byzantine elements, Beit Alpha, Israel.

Aquarius You were fortunate enough to be born under the humanitarian zodiac sign of Aquarius. You are therefore ruled by electric and progressive Uranus making you forward thinking and self-directed. You’re a born revolutionary so no one can tell you how to live your life. You just don’t want to be like others and take pride in the fact that you’re so unique. You are a zesty individual, having tremendous amounts of energy. If you’re not able to live your life on your own terms, you’ll dream and aspire to a future time when you can fulfill your destiny to the fullest in exactly the way you want. You share your zodiac sign with many other grand personalities. Because you have great organizational and communication skills you work really well with others. You’re investigative, curious and extremely active mentally. Communication is your specialty and you relate well to the world. You like to create a comfortable environment in which to live. There’s a universal quality about you. January 21- 31

Astrological sign The concept of the zodiac originated in Babylonian astrology, and was later influenced by Hellenistic culture. According to astrology, celestial phenomena relate to human activity on the principle of "as above, so below", so that the signs are held to represent characteristic modes of expression,[1] or primary energy patterns indicating specific qualities of experience, through which planets manifest their dimension of experience.[2] The twelve sector division of the ecliptic constitutes astrology's primary frame of reference when considering the positions of celestial bodies, from a geocentric point of view, so that we may find, for instance, the Sun in 23º Aries (23º longitude), the Moon in 7º Scorpio (217º longitude), or Jupiter in 29º Pisces (359º longitude). Various approaches to measuring and dividing the sky are currently used by differing systems of astrology, although the tradition of the Zodiac's names and symbols remain consistent. Western zodiac signs[edit] ). ).

Astrology, Horoscopes, Horoscope Compatibility and Face Reading House (astrology) Most horoscopic traditions of astrology systems divide the horoscope into a number (usually twelve) of houses whose positions depend on time and location rather than on date. In Hindu astrological tradition these are known as Bhāvas. The houses of the horoscope represent different spheres of life, described in terms of physical surroundings as well as personal life experiences. This 18th-century Icelandic manuscript drawing shows the twelve astrological houses with signs for the planetary rulership or maybe planetary joy. The houses are divisions of the ecliptic plane (a great circle containing the Sun's orbit as seen from the earth), at the time and place of the horoscope in question. Every house system is dependent on the rotational movement of Earth on its axis, but there is a wide range of approaches to calculating house divisions and different opinions among astrologers over which house system is most accurate. There are many systems of house division.

History of astrology Astrological beliefs in correspondences between celestial observations and terrestrial events have influenced various aspects of human history, including world-views, language and many elements of social culture. Among Indo-European peoples, astrology has been dated to the 3rd millennium BC, with roots in calendrical systems used to predict seasonal shifts and to interpret celestial cycles as signs of divine communications.[1] Until the 17th century, astrology was considered a scholarly tradition, and it helped drive the development of astronomy. It was commonly accepted in political and cultural circles, and some of its concepts were used in other traditional studies, such as alchemy, meteorology and medicine.[2] By the end of the 17th century, emerging scientific concepts in astronomy, such as heliocentrism, were irrevocably undermining the theoretical basis of astrology, which subsequently lost its academic standing. Early origins[edit] Ancient world[edit] Hellenistic Egypt[edit]

Planets in astrology Planets in astrology have a meaning different from the modern astronomical understanding of what a planet is. Before the age of telescopes, the night sky was thought to consist of two very similar components: fixed stars, which remained motionless in relation to each other, and "wandering stars" (Ancient Greek: ἀστέρες πλανῆται asteres planetai), which moved relative to the fixed stars over the course of the year. To the Greeks and the other earliest astronomers, this group comprised the five planets visible to the naked eye, and excluded the Earth. Although strictly the term "planet" applied only to those five objects, the term was latterly broadened, particularly in the Middle Ages, to include the Sun and the Moon (sometimes referred to as "Lights"[1]), making a total of seven planets. Astrologers retain this definition today. To ancient astrologers, the planets represented the will of the gods and their direct influence upon human affairs. Planetary symbolism[edit] Daily motion[edit]