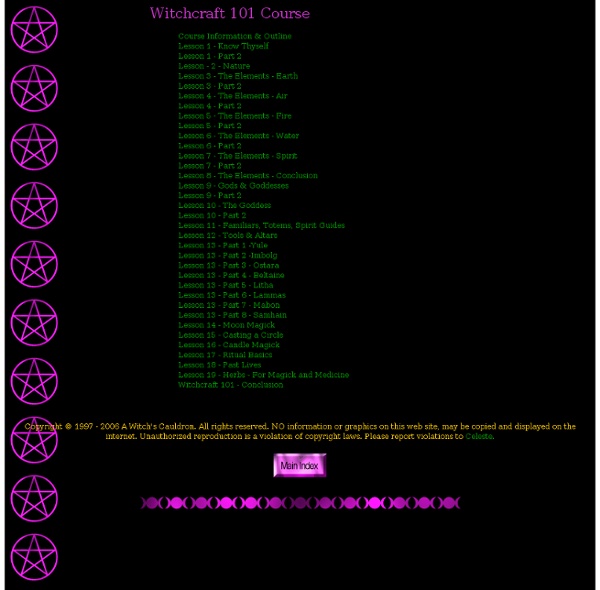 Beginners in Magic Start here! Puzuzu brings you a beginners guide on how to get started in Spells and Magic and use this site to help you. What is Thou looking for? If you can't find it, then search the web for right here... Custom Search Click on the link in each paragraph to learn the subject at hand. First let me tell you that if you are not interested in making Magic and the Occult a way of life, then you should not "Dabble" or mess with any of this information. One must Master several things before ever attempting to do Spells! So here we go... 1. 2. Do your stretching and so forth, then lay down, close your eyes and picture a big trash dumpster on your mental screen. 3. 4. 5. At this time I should warn you of one thing. Magic is a way of life, not a game. 6. Now remember this, Astral Projection or OBE's (out of body experience) can take anywhere from weeks to years to master and you must take your time and do not give up. 7. *Stay away from the Black Magic until you have a couple years of practice and knowledge.

One Wiccan's Path — Cleansing & Charging your Crystals & Stones witch By Doreen Valiente Hear now the words of the witches, The secrets we hid in the night, When dark was our destiny’s pathway, That now we bring forth into the light. Mysterious water and fire, The earth and the wide-ranging air. The birth and rebirth of all nature, The passing of winter and spring, We share with the life universal, Rejoice in the magickal ring. Four times in the year the Great Sabbat Returns, And the witches are seen, At Lammas and Candlemass dancing, On May Even and old Hallowe’en. When day-time and night-time are equal, When sun is at greatest and least, The four Lesser Sabbats are summoned, Again witches gather in feast. Thirteen silver moons in a year are, Thirteen is the coven’s array, Thirteen times at esbat make merry, For each golden year and a day. The power was passed down the ages, Each time between woman and man, Each century unto the other, Ere time and the ages began. By night he’s the wild wind’s rider, The Horn’d One, the Lord of the Shades. The Witches' Rune

How to become a Wiccan or Witch How to Become a Wiccan or Witch Being a Wiccan or Witch is generally not something you are born as or just wake up one morning and decide to become. More often than not, you come across it by accident unless you were raised that way. Many find the philosophies of how Wicca and Witchcraft view nature are the same as the one's they currently hold. As Silver RavenWolf accurately stated in her book To Ride A Silver Broomstick. If you are one who has seen striking similarities between what you believe and have found here, there are generally accepted ways to increase your awareness and find communion with others who feel the same. Read everything you can get your hands on that will tell you more about the beliefs of Wicca and Witchcraft. While doing this, you will begin to form associations and hopefully find correspondances within yourself. There are no right or wrong answers and it is not a test. Most importantly, listen to your inner voice. This ritual should be yours and yours alone.

How to Learn Witchcraft Advertisements Call a Wiccan Psychic for Guidance! Home > How to Learn Witchcraft Witchcraft or wicca is a pagan religion--a religion of nature. The first step to learn witchcraft is to study the religion itself. You can do this by studying as many books and journals both offline and online. The next step is to explore the magic. Magic is not a hocus pocus way of bending the laws of nature to suit your needs. For this you need to understand the fundamental principles of casting circles, calling quarters, invoking God/ goddess, raising and directing the energies and finally, grounding, centering and closing the circle. Try to understand the various phases of the moon, its waxing, growing full and waning and their effect on your moods and body. You must also do some meditation and visualization exercises to increase your concentration and focus. Now you can begin your basic spell work starting with your new moon ritual. Do not go after the word-for-word rituals that you read everywhere.

Enochian Magick Reference Document Back Home Table of Contents Note: Due to their large size, the illustrations for this document are on separate linked pages. Thanks to Scott M. for the scans he provided. The Dee Diaries The systems of magick now known as Enochian magick derive from the work of the Elizabethan scholar Dr. The method employed for these works was fairly standard for the time. Dee made multiple copies of these records. In later years, Dee apparently decided to conceal his magickal records in a hidden compartment of a large cedar chest he possessed. According to Ashmole, about half of the hidden records were mistakenly destroyed by the discoverer’s maid before efforts were made to preserve the rest. The record of these operations is very detailed; so much so that it takes careful study to separate the spiritual "wheat" from the chaff. Chronologically, Dee and Kelly’s work divides into three highly productive periods separated by months in which nothing of particular value was received. Equipment Missing pieces

The Wiccan's Real Version of the Creation Story from the Book of Shadows The basic creation story tells of the birth of the cosmos. It explains how a no-thing became a some-thing. Every culture, religion, and civilization has, somehwhere within its history, the myth of creation. Long, long, ago, there was only darkness---a deep, ebony ocean of empty infinity---the void that was no place. In delight, our Lady began the Great Work. Our Lady chanted the words of perfect love and perfect peace and, as these sounds fell to the Earth, the trees, flowers, and grasses took root in the fertile soil of Gaia. And when Her dancing slowed, the Lady sought a companion, to share the wonders of the many worlds. Together, the Lord and Lady created all the beings of Earth. To each being our Lady gave a unique vibration in which to communicate, and the Lord bestowed to each the fire of passion and the burning instinct to survive. Together, the Lord and Lady blessed the first humans with free will.

Casting a Circle The Purposes of a Circle A sacred circle has several purposes, the most significant of which is to define an area where formal ritual work can be performed. A circle is a place in which the rules and conditions are different to that of the everyday world. A circle is not a barrier, but a doorway to another world. To contain any magickal energy raised and to prevent its dissipation until it has been used up is another purpose of the circle. The sacred circle does not need to be physically represented (drawn or marked on the ground), it just needs to be visualized. The circle is a spiritual entity. 1. 2. 3. 4. 5. 6. 7. This completes the casting of your circle. How to Close a Circle Go to the North, hold up your blade, and say, “Guardians and spirits of the North wind, my ritual is now complete. Extinguish your altar candles and bow your head at the altar, saying, “I declare this scared circle closed. What is Thou looking for?

Learn Magic (REAL magic) the Stupid.. er Fast Way | Website Hecate Becoming a Witch Becoming a Witch How to become a Witch is one of the major questions asked when they are just discovering the Craft. The answer to that question is one does not become a Witch.....they are a Witch, and it is just reaching down and finding it within them. It is not a matter of "becoming" a Witch, but finding the Witch within and, while the answer is quite simple, yet; to some, it can be quite complex. Becoming a Witch means learning how to work ritual and magick, methods of raising, containing and releasing power, how to work with the energies of the moon and earth and the principles of sympathetic magick upon which most Witchcraft magick is based. Witches are very unique individuals and some, no....... many, might call us strange. Some people who become interested in Witchcraft have expectations that Witches are gifted with amazing powers as the result of a particular ceremony or spell. The decision to become a Witch is not one you should take lightly.