How to easily delete your online accounts 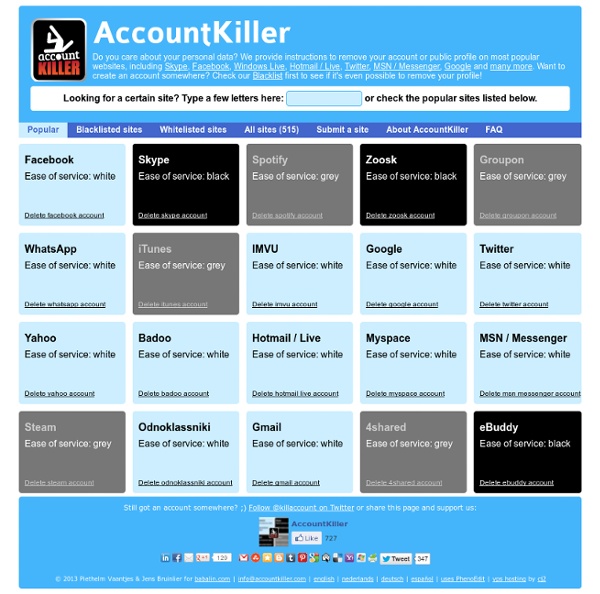 How To Use Skype On Android For Beginners Your Android smartphone makes phone calls. This much is obvious. But did you know that your Android tablet can make calls too, with the right app installed? We’re talking, of course, about Microsoft’s messaging and VOIP app, Skype, an app that can revolutionise the way you make calls and connect with people. Widely used over the past 10 years, Skype is a very useful addition to any Android device. But the chances are you’re not familiar with it; alternatively, you might have an older relative wielding an Android smartphone for the first time (and we hope you showed them our guide written especially for such an occasion). What Skype Can Do For You It’s easy to ignore or overlook Skype as a bit of a gimmick. For the past few years, mobile versions of the Skype app have been revolutionising how we use smartphones. Getting Started With Skype To start using Skype on your Android device, open the Play Store, search for Skype and tap Install. Making A Skype-to-Skype Call Call Home With Skype

The Beginner's Guide to Skype Skype, the popular Internet calling app, has been around for quite some time. The (mostly) free service launched in 2003, and has become one of the easiest and cheapest ways to stay in touch with others across the world. Whether you're traveling internationally or want to save money when calling others, Skype has become a great option because it's accessible through computers, phones, tablets, home phones, TVs and even devices like your Xbox One. Ready to plunge into the Skype action? 1. Getting started is as easy as any other app. Image: Screenshot Kyli Singh Choose how you want to log in. If you choose to connect with your Facebook account, the benefit is that you’ll be able to view your Facebook News Feed and contact your Facebook friends in Skype. On the Facebook News Feed in Skype, you can hover your mouse over your friend’s update, which will show if she is available for phone or video calling. You can always connect your Facebook account at a later date. 2. 3. 4. Profile settings

The (Latecomer) Beginner's Guide To Minecraft Minecraft first came out in 2009; but just a few weeks ago it debuted on the current console generation. What makes this game endure, 5 years later – with over 15 million licensed players on the PC/Mac alone? It’s awesome, that’s what. If you’re late to the party though, don’t worry – this extensive beginner’s guide has you covered. Why Minecraft? It easy to dismiss Minecraft as an indie game that really ought to have hired some better digital artists, but if you can get past the giant blocks of ugliness you’ll be sure to find at least one aspect of the game that really appeals. For some, it’s about the adventure. For others, it’s the creative freedom allowed. For others, it’s about mastering the complex systems of crafting redstone machines, or the simple pleasures of farming – establishing a sustainable food and resource chain. Mobile versions (the “Pocket Edition”) differ slightly, and this guide was written from the perspective of PC gameplay. Game Modes Basic Controls Crafting Combat

How To Create Your Own Infograph Using Canva Have you ever tried to create an infograph? I'm sure you've seen many in the wild, amazingly and dynamically delivering statistics and information... and getting incredible amounts of social signals from an increasingly visual online landscape. But if you're like me, lacking the ability to so much as draw a circle in PhotoShop, you might have dismissed the idea of creating infographs yourself as a bad job and moved on. Yet the allure is still there, is it not? Fortunately, as the title of this article suggests, it's not to late to get in the game! 1. Certainly the first and most important part of creating any great graphic is deciding what it is you want to communicate. Also, for the purposes of this technique, you'll want to choose a topic that you can break down into a series of bite-size chunks. In the case of my example, I wanted to illustrate the relative sizes of some of the major social networks, so those were my sections. YouTubeFacebookGoogle+TwitterPinterestInstagramLinkedInVine

Got A New Windows Phone? Get Up To Speed With These Tutorials Suddenly found that you’re the owner of a new Windows Phone? Perhaps you made the jump after being convinced by our strong argument for switching. Whether you received a Nokia, HTC or other model for Christmas or have simply made a seasonal upgrade to your previous device, switching to a new mobile OS can be something of a culture shock. Over the past few years we’ve published a considerable collection of guides and tutorials for readers to get familiar with Windows Phone 8 and 8.1. In this post – which you might consider your one-stop resource – we’ll show you how to get to grips with the Android and iOS alternative as quickly and easily as possible. Getting Started With Windows Phone 8.1 After unboxing your Windows Phone 8.x device, you’ll naturally want to switch it on and start setting it up. With a SIM card inserted you shouldn’t have any trouble making calls, but you might need a bit of help setting up your email and social networks (all of which can be set up from the same screen).

The Nutshell: A beginners' guide to APIs | Media Another week, another announcement about an application platform. This week it was Bebo's turn. But if the words 'application' and 'platform' made your eyes glaze over, here's a few pointers: An introduction Websites are built using code. (You're still with me?) Most big commercial websites keep that code hidden - after all, they'll have paid a significant sum of money for a fancy website with lots of complicated programming, and they don't want people pinching it. APIs API stands for 'application programming interface', but basically describes one way to plug your website into another. Developers can use different APIs in different ways to build different things. Why? The advantage for the host site is that it gets lots of new, cool features for free, while the developers get to promote their work on a more high profile site and build on somebody else's work. Fancy a go? Someone with programming experience could knock up an application in a few hours. Some example APIs: What next?

How To Safely Share Passwords With Others Who Need Them - ReadWrite It’s easy to poke fun at companies that treat sensitive information recklessly, sending or receiving plaintext passwords via unencrypted email or chat, or storing customer information in ways that are far from secure. But it can be a logistical nightmare to let multiple remote employees log into a shared account in a secure fashion. Luckily, there are a few options to make this a little easier. Here's a quick run-through of some of the best options. LastPass Like most password managers, LastPass lets users to log in with just one master password; the tool stores all of their other passwords. In addition, LastPass’ enterprise accounts will let you share login data between individuals and across teams, with customizable permissions. It’s also possible for a Premium account holder to share password information in a single file with up to five other LastPass users, which could be useful for tiny startups, partnerships, or people needing to share passwords with friends or family members. Strip

How to Configure Your Router to Make Your Home Network Really Secure Default router settings put your network at risk. Not only could strangers in your vicinity use your Wi-Fi without your permission, their freeloading could subsequently reduce your bandwidth, and exhaust your data allowance. More worryingly, their actions even get you in trouble if they used your network for illegal activities, whether downloading copyrighted material or hacking into your devices. Default settings could also invite wannabe hackers to log into your network’s admin panel and hijack your settings. We have summarized the standard router settings that can prevent leeching and unauthorized access to your network. Basic Router Security Settings The following are the bare minimum security-related settings. If your router interface doesn’t immediately reveal the settings listed below or doesn’t look like the example screenshots, I recommend you to consult your router’s manual; you can probably find it online. Change Default Administrator Credentials Turn Off WPS Update Firmware

Staying safe on public Wi-Fi Apple finally started singing a new tune. The maker of iPhones and iPad tablets on Monday unveiled its first subscription-streaming service, dubbed Apple Music, as its revamped way of presenting songs on its devices. Apple's $10 a month service builds upon the music subscription service that it acquired a year ago with its $3 billion deal for Beats. Apple will also offer a plan for families of up to six people to share a subscription for $15 a month. When it launches June 30 in over 100 countries, Apple Music will be available with a three-month free trial. Some elements will be free without a subscription, such as a viewing artists' content and listening to radio with some limitations. In addition to running on Apple devices -- including the iPhone, iPad, iPod Touch, Mac computers and Apple TV -- Apple Music service will also be available for devices that use Android, the mobile operation system from rival tech giant Google. WWDC is one of Apple's most important events of the year.

How to set up two-step verification for your Apple ID Microsoft's super-soldier Master Chief, from the venerable Halo game series, will have a busy schedule on Monday. That's because the software company and video game console maker will kick off Electronic Entertainment Expo, the game industry's largest annual trade show, with a press conference dedicated to Xbox. The company will devote much of the show to Halo 5: Guardians, one of the most anticipated games of the year. E3 serves as one of the best opportunities for Microsoft to grab gamer's attention for the next Halo game, as well as set the tone for its Xbox One game console. Tune in: CNET's live blog of Microsoft's E3 event on Monday Before launching the console in November 2013, Microsoft faced heavy criticism for shifting away from game playing and toward television, with a large focus on cable box integration and other media capabilities. It's been quite the turnaround. But maintaining that momentum isn't a given. Halo 5: Guardians front and center Xbox One, meet Windows 10 crowd.