Fundamental norsk/Norwegian: Introduction to Fundamental Norwegian (Bokmål) - Beginner Level. This is the introductory page to a course in Norwegian (bokmål) that aims to cover the material from an initial point, at the beginner level, starting with the alphabet, and its pronunciation, through the interaction with the following YouTube video, and related Pearltree site. 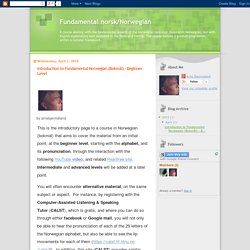 Intermediate and advanced levels will be added at a later point. You will often encounter alternative material, on the same subject or aspect. For instance, by registering with the Computer-Assisted Listening & Speaking Tutor (CALST), which is gratis, and where you can do so through either facebook or Google mail, you will not only be able to hear the pronunciation of each of the 29 letters of the Norwegian alphabet, but also be able to see the lip movements for each of them ( In addition, this site (CALST) provides similar pronunciation for 43 other sets of subjects and terms associated with daily objects and activities etc.

Learn Norwegian 69 Seconds a Day - The Alphabet. AlfabetØya. CALST page. Norwegian Personal Pronouns - Learn Norwegian Naturally. We have learned some basic Norwegian vocabulary in the previous lessons, but we don’t know how to make a sentence in Norwegian yet. 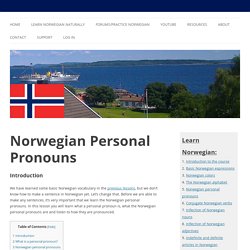 Norwegian Sentence Structure Part 2. Norwegian Question Words with Pronunciation. In this short lesson you are going to learn the most common Norwegian question words. 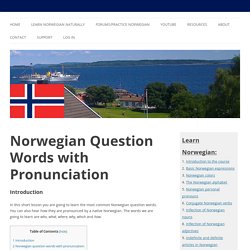 You can also hear how they are pronounced by a native Norwegian. The words we are going to learn are who, what, where, why, which and how. Here are some examples where I have used the Norwegian question words: In this short article we have learned the most common Norwegian question words. These will be very useful, so feel free to take some extra time here and work with the words. We have learned a lot of things and I think it’s time to make some Norwegian sentences! If you have any questions or want to leave feedback, you can post that below. You must be logged in to create new topics.