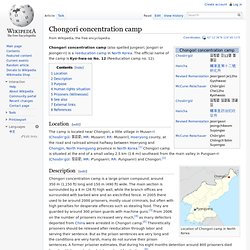 The official name of the camp is Kyo-hwa-so No. 12 (Reeducation camp no. 12). Location[edit] The camp is located near Chongori, a little village in Musan-ri (Chosŏn'gŭl: 무산리; MR: Musanri; RR: Musanri), Hoeryong county, at the road and railroad almost halfway between Hoeryong and Chongjin, North Hamgyong province in North Korea.[1] Chongori camp is situated at the end of a small valley 2.5 km (1.6 mi) southeast from the main valley in Pungsan-ri (Chosŏn'gŭl: 풍산리; MR: P'ungsanri; RR: Pungsanri) and Chongori.[2] Location of Chongori camp in North Korea Description[edit] Chongori concentration camp is a large prison compound, around 350 m (1,150 ft) long and 150 m (490 ft) wide. Purpose[edit] Main purpose of Chon­gori camp is to punish people for usual crimes or political crimes, e. g. illegal border crossing. 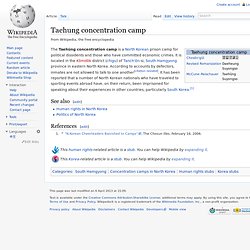 It is located in the Kŏmdŏk district (chigu) of Tanch'ŏn-si, South Hamgyong province in eastern North Korea. According to accounts by defectors, inmates are not allowed to talk to one another[citation needed]. It has been reported that a number of North Korean nationals who have traveled to sporting events abroad have, on their return, been imprisoned for speaking about their experiences in other countries, particularly South Korea.[1] N.Korean Cheerleaders Banished to Camps. Women who caught South Korea's attention with their charm and cheerleading antics when they accompanied the North Korean athletes to the Busan Asian Games have ended up in North Korean detention camps. 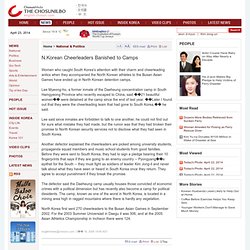 Lee Myeong-ho, a former inmate of the Daeheung concentration camp in South Hamgyeong Province who recently escaped to China, said 21 beautiful women were detained at the camp since the end of last year. Later I found out that they were the cheerleading team that had gone to South Korea, he said. Lee said since inmates are forbidden to talk to one another, he could not find out for sure what mistake they had made, but the rumor was that they had broken their promise to North Korean security services not to disclose what they had seen in South Korea. 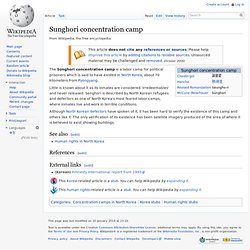 Little is known about it as its inmates are considered 'irredeemables' and never released. Senghori is described by North Korean refugees and defectors as one of North Korea's most feared labor camps, where inmates live and work in terrible conditions. Although North Korean defectors have spoken of it, it has been hard to verify the existence of this camp and others like it. The only verification of its existence has been satellite imagery produced of the area of where it is believed to exist showing buildings. Hoeryong reeducation camp. Location of Hoeryong camp in North Korea Kyo-hwa-so Hoeryong is a "reeducation camp" in Hoeryong, in North Hamgyong province of North Korea.[1] It is not to be confused with Haengyong political prison camp (Kwan-li-so Nr. 22), which is located 10 km (6.2 mi) north-east of Hoeryong and is sometimes also called Hoeryong camp. 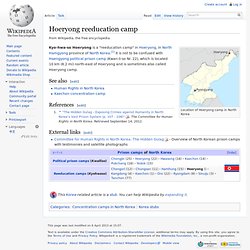