In ‘groundbreaking’ case, Franciscan friars charged with allowing abuse of at least 80 kids. Three members of a Franciscan religious order are criminally charged with conspiracy for allegedly letting a friar who was a known predator hold jobs in which he sexually abused more than 80 children. 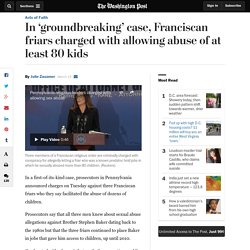 (Reuters) In a first-of-its-kind case, prosecutors in Pennsylvania announced charges on Tuesday against three Franciscan friars who they say facilitated the abuse of dozens of children. Prosecutors say that all three men knew about sexual abuse allegations against Brother Stephen Baker dating back to the 1980s but that the three friars continued to place Baker in jobs that gave him access to children, up until 2010. Confronted with a lawsuit that made the accusations public, Baker killed himself in 2013, at age 62, in the monastery where he lived. On Monday, state prosecutors announced that three men who supervised him — Brothers Anthony M. [‘Payout chart’ for molestation: Secret archive in Pa. held chilling details of clergy abuse] “This is groundbreaking. Acts of Faith newsletter The U.S. ‘Payout chart’ for molestation: Secret archive held chilling details of clergy abuse. Pennsylvania Attorney General Kathleen Kane speaks about the 147-page report on alleged sexual abuse in the Altoona-Johnstown Diocese. 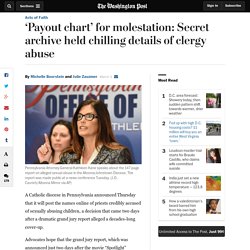 The report was made public at a news conference Tuesday. (J.D. Cavrich/Altoona Mirror via AP) A Catholic diocese in Pennsylvania announced Thursday that it will post the names online of priests credibly accused of sexually abusing children, a decision that came two days after a dramatic grand jury report alleged a decades-long cover-up. Advocates hope that the grand jury report, which was announced just two days after the movie “Spotlight” focused national attention on child sexual abuse by winning the Oscar for Best Picture, will lead to new legislation permitting more prosecutions of abusive priests and those who supervised them. [Now you can “Click to Pray" with Pope Francis from your iPhone] “These findings are both staggering and sobering. In this report, the grand jury agreed. Bishop Mark L. “I have met with victim-survivors. ‘Spotlight’ portrayal of sex abuse scandal is making the Catholic Church uncomfortable all over again. Cardinal Bernard Law, left, celebrates Mass in Boston on Sunday, July 21, 2002. 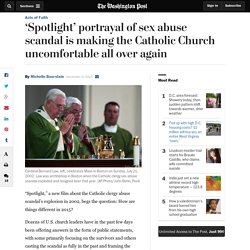 That painful sense of solitude persists even 14 years after the Boston Globe documented a massive cover-up of sexual abuse in the Catholic Church, setting off a wave of exposés across the country that continue until this day. Even now, some victims think that they were the only one hurt by a particular priest. [Why Catholics should be grateful for ‘Spotlight’] The Archdiocese of Baltimore just took a step to address that pain by joining the growing number of dioceses that have posted a list, all in one place, of priests who have been accused in the diocese, some dating back decades.

This step is important, advocates say, so that when victims who have suffered in silence type their abusers’ names into Google, they will see that these men have been accused by others as well. Thanks to the list, Caine said, that feeling might be diminished. But Caine said that list was never meant to be permanent.

Deliver Us From Evil. Filmmaker Amy Berg recounts a harrowing story of child abuse and how a serial child molester went free for the better part of two decades in this documentary. 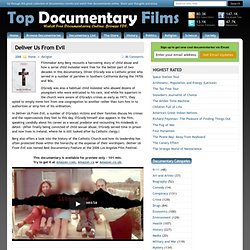 Oliver O'Grady was a Catholic priest who served in a number of parishes in Southern California during the 1970s and '80s. O'Grady was also a habitual child molester who abused dozens of youngsters who were entrusted to his care, and while his superiors in the church were aware of O'Grady's crimes as early as 1973, they opted to simply move him from one congregation to another rather than turn him in to authorities or strip him of his ordination. In Deliver Us From Evil, a number of O'Grady's victims and their families discuss his crimes and the repercussions they feel to this day. O'Grady himself also appears in the film, speaking candidly about his career as a sexual predator and recounting his misdeeds in detail. This documentary is available for preview only - . The end of the Catholic Church as we know it? These are the issues confronting the U.S. 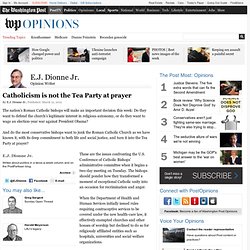 Conference of Catholic Bishops’ administrative committee when it begins a two-day meeting on Tuesday. The bishops should ponder how they transformed a moment of exceptional Catholic unity into an occasion for recrimination and anger. When the Department of Health and Human Services initially issued rules requiring contraceptive services to be covered under the new health-care law, it effectively exempted churches and other houses of worship but declined to do so for religiously affiliated entities such as hospitals, universities and social welfare organizations.

Catholics across the political spectrum — including liberals like me — demanded a broader exemption, on the theory that government should honor the religious character of the educational and social service institutions closely connected to faith traditions. Under pressure, Obama announced a compromise on Feb. 10. Vermont - Diocese Settles Abuse Suits. 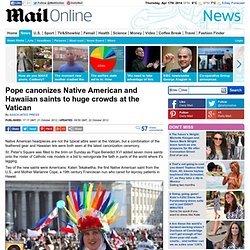 St. Peter's Square was filled to the brim on Sunday as Pope Benedict XVI added seven more saints onto the roster of Catholic role models in a bid to reinvigorate the faith in parts of the world where it's lagging. Two of the new saints were Americans: Kateri Tekakwitha, the first Native American saint from the U.S., and Mother Marianne Cope, a 19th century Franciscan nun who cared for leprosy patients in Hawaii.

The Vatican's Crackdown on American Nuns