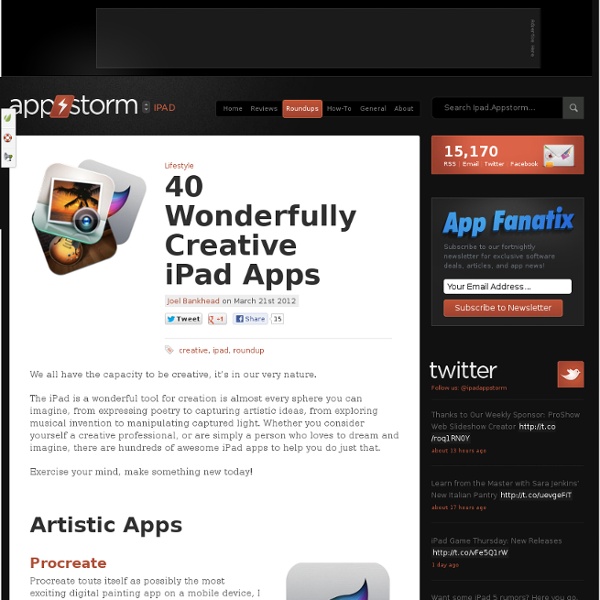 We all have the capacity to be creative, it’s in our very nature. The iPad is a wonderful tool for creation is almost every sphere you can imagine, from expressing poetry to capturing artistic ideas, from exploring musical invention to manipulating captured light. Whether you consider yourself a creative professional, or are simply a person who loves to dream and imagine, there are hundreds of awesome iPad apps to help you do just that. Exercise your mind, make something new today! Artistic Apps Procreate Procreate touts itself as possibly the most exciting digital painting app on a mobile device, I think it lives up to that claim. It features a great deal of functionality that’s packaged in an effortlessly intuitive interface, it can’t fail to appeal to the artistic among you! Zen Brush Zen Brush is a beautiful way to get involved and make your own art! Rather than being a fully fledged painting app like Procreate or Brushes, the beauty of Zen Brush lies in the simplicity of the concept. djay

50 Fantastic Free iPad Apps We all love getting something great for free! However, hunting down the good free iPad apps from the terrible ones in the jungle of the App Store can be a difficult job. Fortunately for you, I’m here to help. We’ll try and keep a mix of old classics and new favourites, read on and stock up on fantastic free iPad apps! Like the article? 20 Amazing iPad Apps for Educators When one looks at how technology has changed education over the past decade, one can’t help but be blown away by the sheer number of iPad apps for educators that have absolutely flooded the electronic marketplace. There are so many iPad apps for teachers released every month that even the most plugged-in educator would have a difficult time processing and utilizing them all. Luckily, when teachers are looking to learn how to use iPads in the classroom, they need to look no further than TeachHUB magazine and TeachHUB.com -- an educator’s primary go-to resource when researching iPad apps for teachers and iPads in the classroom. Read on to learn about TeachHUB magazine and TeachHUB.com’s updated list of the hottest iPad apps for teachers and iPad apps for education, destined to forever alter your curriculum landscape, organized here by subject. Scroll down for an index of many of TeachHUB's helpful iPads in the classroom app reviews and more of the best usage of iPads in the classroom.

Schools are Switching Textbooks for iPads: Good for Education or Unnecessary Expense? Approximately 600 school districts have transitioned from traditional textbooks to the iPad—and the change may soon be coming to college campuses. Proponents of the iPad in schools claim a range of benefits—from lowered costs to less strain on students’ backs. But is the iPad really a good replacement for a textbook? Here’s a look at the pros and cons. The iPad Advantage They’re more portable How to Integrate Dropbox with Pages, Keynote, and Numbers on iPad The iWork apps are some of the best apps on the iPad, and each show just how powerful a touchscreen device can be with the most basic of computing functions. In fact, there’s not much to dislike about the iWork apps, except for one thing: importing and exporting files. You can open documents from email attachments, download them from websites, or import them from other apps like Dropbox.

39 Sites For Using iPads in the Classroom Pages Friday, October 7, 2011 39 Sites For Using iPads in the Classroom 6 Ways Students Can Collaborate With iPads The following post is written by Greg Kulowiec of EdTechTeacher . Join EdTechTeacher at the iPad Summit in Atlanta on April 10-12. The app store is loaded with options that allow students to create content on their iPads. From comic strip creators to mind maps, video editing and publishing, screencasting & digital books, the options for individual student creation are expanding. However, collaboration between students is often a critical component of any classroom activity or project and increasingly there are options available that allow for collaborative efforts across iPads. Below are six ways to support collaboration between student iPads that cover the spectrum of creation options that range from text to digital storytelling to video creation.

Integrate Dropbox with Pages, Keynote, and Numbers on iPad and iPhone — techinch The iWork apps are some of the best apps on iPad, and each show just how powerful a touchscreen device can be with the most basic of computing functions: creating and editing documents, spreadsheets, and presentations. They each work quite well with their respective Microsoft Office counterparts also. And, the latest updates turned each of the iWork apps into universal apps, so you can use the full apps on your iPhone, iPod Touch, and iPad. 50 Must-Have Educational Apps It’s time for holiday road trips and you know what that means: driving, flying, cranky kids, and… teaching opportunities! What’s that, you say? Well, there is so much downtime during the holidays where kids and adults spend hours just passing the time… why not try out some new apps on your phone? Many of these apps were found by The Teaching Palette, be sure to check out their fantastic site for more helpful resources! From learning the ABCs to doodling, there’s plenty of terrific apps out there that will pass the time but also educate.

5 iPad Apps to Help Students and Teachers Collaborate There are not an abundance of apps for the iPad that really encourage a worthwhile level of collaboration between students or between students and teachers. There are several that would allow students to share an iPad and work on something together on one iPad, but what if you want students to be working on their own iPads at school, at home, or at a time of their choosing? The following 5 apps are designed for just that, and help take advantage of the iPad as a collaborative tool. 1. Rabble Browser – Spend a lot of time online with your class? Rabble Browser may be ideal for you. Creation Apps Used On The iPad My technology integration specialist asked me to provide a list of creative apps that we have used in our classroom. All the apps are in our tool box, have been used, or will be used. I have included some of the many videos that show students actually using the apps.

Complexity and Quantum of Solace Quantum of Solace In What Movie UIs Say About the Future, Tony Walt reviews a variety of interface types featured in some recent movies. His discussion on Complexity was particularly interesting — especially in the context of the iPad and its move towards simplicity: iPad Apps and Bloom’s Taxonomy   I felt it was worthwhile to update the Top Post (over 25,000 views) on Langwitches: Bloom’s Taxonomy for iPads I have added links to each app represented on the visual. Remember: Exhibit memory of previously-learned materials by recalling facts, terms, basic concepts and answers. describenamefindnamelisttell 10 iPad Apps for Web Curation Curation vs. Aggregation? Curation is such a necessity these days. The overwhelming wave of information we are exposed to is drowning us in facts and opinion. Not only do we need to be curating the information that we are consuming but we need to be insisting that our students have the skills and necessary tools in which to curate their own world.