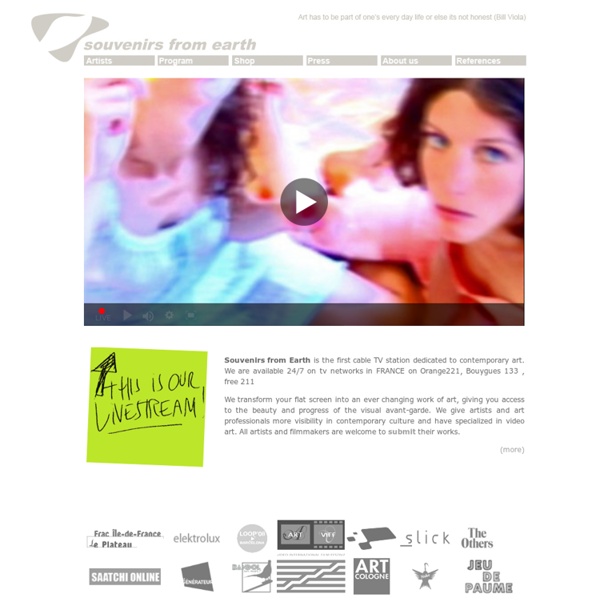 About Art21 Over the past decade, Art21 has established itself as the preeminent chronicler of contemporary art and artists through its Peabody Award-winning biennial television series, "Art in the Twenty-First Century." The nonprofit organization has used the power of digital media to introduce millions of people of all ages to contemporary art and artists and has created a new paradigm for teaching and learning about the creative process. In addition to its PBS series, Art21 produces short-format documentary series, viewable on multiple online platforms. Reservation Before make a Shukubo reservation please consider the following: 1. Reservations must be made at least 7 Business days before your planned stay. 2. Your reservation will be completed when you receive our reply confirnation by our e-mail or FAX. 3.

Frederik De Wilde - 14 November 2014 - 21 February 2015 Carroll / Fletcher is pleased to present the first UK showing of NanoBlck-Sqr #1, a work by Belgian artist Frederik De Wilde. Created with a nano-engineered material developed in collaboration with NASA and Rice University, NanoBlck-Sqr #1 comprises a material so dark that it absorbs practically all visible light. The artwork is made from carbon nanotube bundles “grown” in a laboratory, as in NASABlck-Crcl #1, and then applied to an aluminium canvas by the artist. Yves Klein worked with chemists to create his now iconic International Klein Blue to offer, as he put it, an “open window to freedom as the possibility of being immersed in the immeasurable existence of colour”.

About LUX - LUX LUX is an international arts agency for the support and promotion of artists’ moving image practice and the ideas that surround it. LUX exists to provide access to, and develop audiences for, artists' moving image work; to provide professional development support for artists working with the moving image; and to contribute to and develop discourse around practice. Founded in 2002 as a charity and not-for-profit limited company, it builds on a lineage of predecessor organisations (The London Filmmakers Co-operative, London Video Arts and The Lux Centre) which stretches back to the 1960s. LUX is the only organisation of its kind in the UK, it represents the country’s only significant collection of artists’ film and video and is the largest distributor of such work in Europe (representing 4500 works by approximately 1500 artists from 1920s to the present day). LUX is a registered charity and not-for-profit company limited by guarantee:

Histoire de l’art HR Giger is probably best known for his creature which was brought to life in the franchise of Alien films. But for almost 50 years Giger has been producing artwork and has established himself as one of the word’s best Fantastic Realism artists. Born in 1940 in Chur Switzerland he know resides in Zurich Switzerland. But JustSayGo’s television host and travel journalist Ron Stern caught up with Giger at his bar in Gruyeres Switzerland. The artist is not known for giving many interviews, especially on camera, which is what makes the exclusive interview so special. Vdrome Vdrome is an online platform that offers regular, high quality screenings of films and videos directed by visual artists and filmmakers, whose production lies in-between contemporary art and cinema. Each screening is presented during a limited period, as in a movie theatre. Vdrome makes available a program of exceptional artists's films and videos that are selected due to their importance, quality and innovative strength, many of which are only shown in the context of film festivals, exhibitions or specific surveys, being therefore of very limited access. Vdrome is an initiative conceived and promoted by Mousse. Vdrome is kindly supported by Polyeco Contemporary Art Initiative for the year 2016.

Tampere Film Festival - Cats and Dogs Cats and Dogs Who is man's best friend and the cutest pet? A Cat and a dog have started an on-going debate... CAT: Who would want to hug a dog? Dogs smell, and so does their breath, whereas we cats are clean and neat. We take care of ourselves and save our masters from contanstly having to wash us. ARGOS centre for art and media THE CINEMA is a special structure (designed by Tom Mares & Walt Van Beek) with comfortable cinema seating where one can view shorter duration artists’ videos and films, on two screens, in an appropriate setting. Two screening programmes run... more 27.4.2014 Erfgoeddag 2014: Look At Where We Are A black space, a projector, speakers, and a screen: in the classic cinema setting and in film history, there is an imaginary line between the viewer and the projected. Argos selected five international works from its collection that seek to transcend... more On the occasion of the commemoration of the Rwandan genocide, filmmaker Marie-Violaine Brincard presents Sarah Vanagt’s ‘Begin Began Begun’ alongside her own film ‘Au nom du père, de tous, du ciel’.