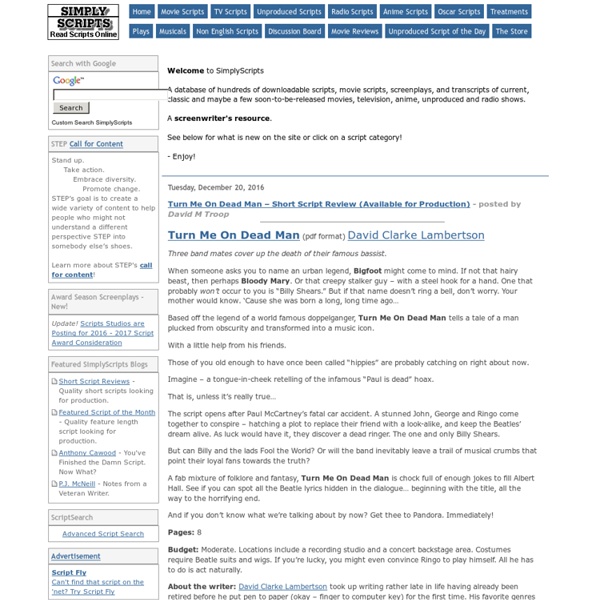 When young Harry needs money to buy a gift, he learns that crime does pay, but in an unexpected way. There’s something about scripts involving school boy crushes, and first loves. Then again – who doesn’t like stories about disreputable (yet somehow charming) con men? If you nodded to both of those statements, then Trick of the Trade is right for you. Because this is a script that actually incorporates both of these elements into one package. Little Harry Cartwright is a simple rural kid, growing up in Depression era Oklahoma.

Turn Anything Into a Screenplay From Wired How-To Wiki If you follow the advice of screenwriting guru Robert McKee, almost anything can be made into a great story — even, say, Slashdot, the site run by Rob Malda (aka CmdrTaco). 1. Create a protagonist. Making A Legendary Movie Trailer With iMovie On The iPad Movie Trailers are a great little creative project that makes putting together a professional looking video really easy. Jeffery wrote a tutorial before on how to make one using iMovie on the Mac, but I’ve been meaning to show you how to do the same using just your iPad (or iPhone). Today I’ll be using my iPad to make a trailer featuring myself and the mischievous little ferret that wandered into my house last week and decided to stay. Unfortunately, this isn’t possible on the original iPad – you’ll need an iPad 2 or the newest generation one; an iPhone 4 or later can also be used, but I’ll demonstrate with an iPad as it’s easier to work with the larger screen. Getting Started – Movie clips

All Movie Scripts at The Screenplay Database Below are all the film scripts currently in the database. 12 and Holding by Anthony S. Cipriano Download | 100 pages | 132 Kb | Digital PDF Format April 6, 2004 Unspecified DraftIMDB 12 Years a Slave by John Ridley2014 Academy Award for Best Adapted Screenplay The Secret's in the Storyboard Hitchcock is notorious for having used them. Spielberg has been known to hire armies of artists to create them, and, as filmmakers and educators, you can use them too. In fact, if you don't, you could be opening yourself up to problems you might not otherwise have.

Ed Blog» Blog Archive Meet the Animator – Jessica Oreck talks to TED-Ed about the Mysteries of Vernacular « The mystery of pants finally solved. This week, TED-Ed is excited to roll out a featured mini-series all about the wacky way that words evolve. All those questions you have about the English language, where words come from, and why we say the things we do. Why do we drive in a parkway and park in a driveway? Why do we say that something is noisy? Why is a single pair of pants called pants and not pant? What Are Storyboards? What Are Storyboards? Storyboarding, or picture writing, is the origin of all written languages, used by ancient cultures before text evolved and as a natural bridge to text. The Chinese language was built using pictographs. Egyptians used storyboards, or hieroglyphics, first etched in stone and later written on papyrus, to organize a complex society and to rule the ancient world.

storyboards What is a storyboard? Once a concept or script is written for a film or animation, the next step is to make a storyboard. A storyboard visually tells the story of an animation panel by panel, kind of like a comic book. Your storyboard will should convey some of the following information: Storyboarding Your Film Before you create your film storyboards, you have to perform certain tasks and make certain decisions. First, begin by evaluating your screenplay and picturing it in terms of separate shots that can be visually translated into individual storyboard panels. Then you determine what makes up each shot and also which images need to be storyboarded and which ones don't. After you start storyboarding, you'll need to determine whether you're shooting for a TV movie or a theatrical release, which will ultimately affect the frame dimensions of your panels.