Least I Could Do: the Comic » by Ryan Sohmer and Lar deSouza 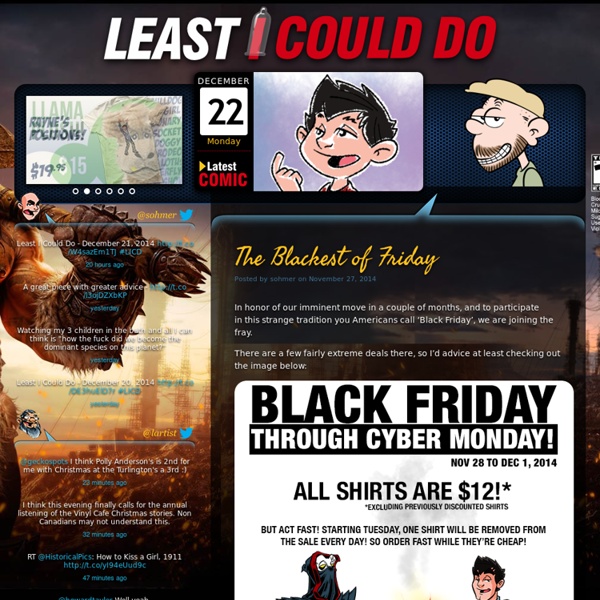 Posted by sohmer on April 17, 2014 We’re way past due on this one, folks, but I’m pleased to announce that LICD Beginnings Volume 6: I’m Doing Sport is on its way to our North American Shores. This book differs from others in the past, as it has a whopping 120 pages, as compared to the 60 pages in Book 5, and the 30 pages in Books 1-4. All that to say, I’m Doing Sport is available for pre-order right this very now, and will be shipping out in the 2nd week of May. Order me! As always, thank you for your continued support!

Hiroshima, U.S.A. Collier's magazine cover from 1950 depicting a mushroom cloud over Manhattan (Chesley Bonestell) There’s no city that Americans fictionally destroy more often than New York. New York has been blown up, beaten down and attacked in every medium imaginable throughout the 19th and 20th centuries. From movies to novels to newspapers, there’s just something so terribly apocalyptic in the American psyche that we must see our most populous city’s demise over and over again. Before WWII, these visions of New York’s destruction took the form of tidal waves, fires or giant ape attacks — but after the United States dropped two atomic bombs on Japan in Hiroshima and Nagaski, the atom was suddenly the new leveler of cities.

DELVE Into Fantasy Hey guys~! Long time no news post! Phew, sorry about that! Things have been crazy around here- between con season, getting sick, and everything else.. but I’m trying to get back on the ball and get things rolling! First off, September’s wallpaper has been posted! Sergei Rachmaninoff Sergei Rachmaninoff Sergei Vasilievich Rachmaninoff (Russian: Серге́й Васи́льевич Рахма́нинов;[1] Russian pronunciation: [sʲɪrˈɡʲej rɐxˈmanʲɪnəf]; 1 April [O.S. 20 March] 1873 – 28 March 1943)[2] was a Russian composer, pianist, and conductor.[3] Rachmaninoff is widely considered one of the finest pianists of his day and, as a composer, one of the last great representatives of Romanticism in Russian classical music.[4] Early influences of Tchaikovsky, Rimsky-Korsakov, and other Russian composers gave way to a personal style notable for its song-like melodicism, expressiveness and his use of rich orchestral colors.[5] The piano is featured prominently in Rachmaninoff's compositional output, and through his own skills as a performer he explored the expressive possibilities of the instrument. Life[edit] Rachmaninoff at age 10

Outsider: A full-color science fiction comic Outsider posts new pages (when available) on Mondays, but updates can be irregular, so I encourage you to use the RSS feed if you're interested in keeping up. [WIP Thread] 22 August 2013: Just a note to let everyone know I'm still here, the comic isn't dead. I'm just going through a patch where it's hard to find free time. I'm still working on the 3D sets for the next pages, but hopefully it won't be long before I can resume posting pages. 20 May 2013: I finally got around to converting the Prologue pages to the new, larger format.

List of compositions by Sergei Rachmaninoff Works by musical form[edit] Chronological[edit] References[edit] External links[edit] Wind Map An invisible, ancient source of energy surrounds us—energy that powered the first explorations of the world, and that may be a key to the future. This map shows you the delicate tracery of wind flowing over the US. The wind map is a personal art project, not associated with any company. We've done our best to make this as accurate as possible, but can't make any guarantees about the correctness of the data or our software. Please do not use the map or its data to fly a plane, sail a boat, or fight wildfires :-) If the map is missing or seems slow, we recommend the latest Chrome browser.

Debunking the student loans crisis - Mar. 30 State cutbacks to higher education are forcing some people to take out more student loans. NEW YORK (CNNMoney) -- Total student loan debt has topped $1 trillion ... but there's no need to panic. Most borrowers have a reasonable amount of debt, and the total balance is not likely to cause major damage to the economy like the mortgage crisis did, experts say. "I don't think it's a bubble," said Mark Kantrowitz, publisher of Finaid.org, a financial aid website. "Most students who graduate college are able to repay their loans." This is not to say that there aren't problems with student loans, which now exceed the amount of credit card debt and auto loans.

5 Counter-Intuitive Productivity Tips Since I decided to become an expert on productivity and time management and started studying these topics, I’ve run into many examples of counter-intuitive advice that actually works. I find it fascinating that whenever you want to really understand something – anything – you will discover that the real truth behind it is usually counter-intuitive. So, here are 5 very useful productivity tips that you can immediately use. 1. Make sure your work is left unfinished

Recycling galaxies caught in the act (PhysOrg.com) -- When astronomers add up all the gas and dust contained in ordinary galaxies like our own Milky Way, they stumble on a puzzle: There is not nearly enough matter for stars to be born at the rates that are observed. Part of the solution might be a recycling of matter on gigantic scales – veritable galactic fountains of matter flowing out and then back into galaxies over multi-billion-year timescales. Now, a team of astronomers led by Kate Rubin of the Max Planck Institute for Astronomy in Germany has used the W.

Kill to be killed in 18th century Denmark Article created on Saturday, March 31, 2012 Science Nordic content is targeted toward the global research community: researchers, students, the business sector, innovation clusters, international institutions and media – along with anybody else with an interest in science. The range of topics encompasses all science based topics and includes history, archaeology and heritage By: Niels Ebdrup, ScienceNordic Suicide murder was a widespread phenomenon in 18th century Denmark. Instead of taking their own life, suicide candidates would kill a child or some other random person, in the hope that they would receive a death penalty.