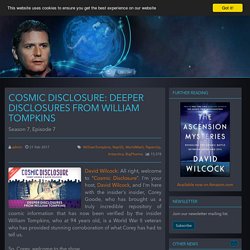 To the Crossroads and into the Frontier – Disrupt & Repair. I came across this article thanks to Warren Ellis; I see Ellis’s point clearly enough and it’s one that I have been more than a little concerned about myself, especially in the greater occulture. 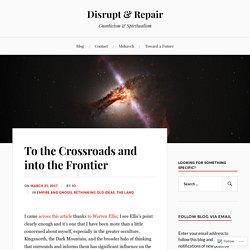 Kingsnorth, the Dark Mountain, and the broader halo of thinking that surrounds and informs them has significant influence on the scene. It’s a trend that extends well-beyond the greens, too. A lot of folks who are committed to ‘preserving a culture’ are edging along similar terrain, looking to join national autonomy to cultural safety. I’m not quite as toothsome as Ellis about this sort of thing; I wouldn’t spring so readily talk of the “nice kind of Hitler,” but this pleasant-sounding green nationalism and cultural pride is still troubling. 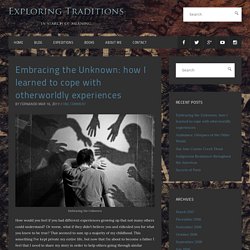 Or worse, what if they didn’t believe you and ridiculed you for what you knew to be true? That seemed to sum up a majority of my childhood. This something I’ve kept private my entire life, but now that I’m about to become a father I feel that I need to share my story in order to help others going through similar experiences. These experiences I had growing up were definitely unwanted, but what made things worse was that I had nobody to turn to leading to me to completely isolate myself from others. Setting the stage Waiting for my brother to be born I can’t say I believe in destiny. Psychic and paranormal experiences are nothing new in my family, at least not on my mother’s side. 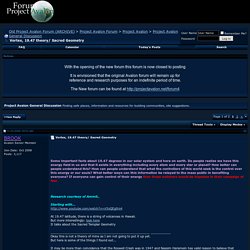 I think that would be an always changing number, not a constant. We're always moving around! On the Sun: sunspot activity and the region of peak temperatures is limited to 19.5 degreees north and south. On Venus: the presumably active major volcano complexes Alpha and Beta Regio are near 19.5 degrees. On Earth: Mauna Loa, Hawaii (19 degrees 28 minutes N, 155 degrees 37 minutes W) The largest shield volcano is at 19.6 degrees north. Mexico City, Mexico (19 degrees 23 minutes N, 99 degrees 10 minutes W) The Pyramid of the Sun at Teotihuacan is at 19.6 degrees north. Article of the Month Page. 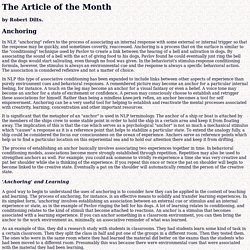 In NLP, "anchoring" refers to the process of associating an internal response with some external or internal trigger so that the response may be quickly, and sometimes covertly, reaccessed. Anchoring is a process that on the surface is similar to the "conditioning" technique used by Pavlov to create a link between the hearing of a bell and salivation in dogs. By associating the sound of a bell with the act of giving food to his dogs, Pavlov found he could eventually just ring the bell and the dogs would start salivating, even though no food was given. In the behaviorist's stimulus-response conditioning formula, however, the stimulus is always an environmental cue and the response is always a specific behavioral action. The association is considered reflexive and not a matter of choice. In NLP this type of associative conditioning has been expanded to include links between other aspects of experience than purely environment cues and behavioral responses.

Natural Anchors. WITCH. Witchery Published on October 4th, 2016 | by Carolyn Elliott High Weirdness is that endlessly fascinating condition of experience where utterly improbable and marvelous things are happening in ways that are eerily resonant with your own human heart and the hearts of those around you. 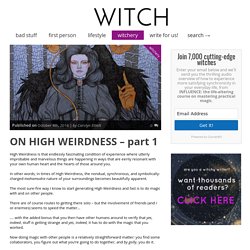 In other words, in times of High Weirdness, the nondual, synchronous, and symbolically-charged mahamudra nature of your surroundings becomes beautifully apparent. The most sure-fire way I know to start generating High Weirdness and fast is to do magic with and on other people. There are of course routes to getting there solo – but the involvement of friends (and / or enemies) seems to speed the matter… …. with the added bonus that you then have other humans around to verify that yes, indeed, stuff is getting strange and yes, indeed, it has to do with the magic that you worked. Bart_Thievescant comments on What's a sign that things are about to go south fast? In Frightening Times, Witchcraft Rediscovers Its Political Roots. From levitating the Pentagon to hexing Trump, witchcraft has a long activist history—and a new activist future. 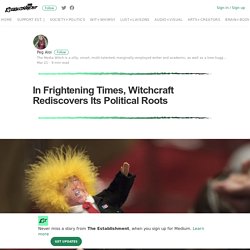 O n a February night at midnight, during a waning crescent moon, American witches cast a binding spell on President Trump. The idea came from author and “magical thinker” Michael M. Productivity for Precious Snowflakes. We’ve been told for years now that what our parents and kindergarten teachers told us is not, in fact, true — we are not each and every one of us special unique snowflakes destined for greatness. 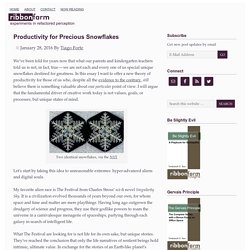 In this essay I want to offer a new theory of productivity for those of us who, despite all the evidence to the contrary, still believe there is something valuable about our particular point of view. I will argue that the fundamental driver of creative work today is not values, goals, or processes, but unique states of mind. Against the Evening Standard. The Neuroplastic Brain: Our Malleable Learning Machine. The exponential growth of research surrounding this subject has revealed that the core principles of neuroplasticity can be used as tools for strengthening, repairing, and growing our brains. 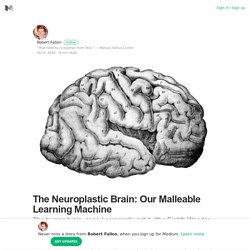 The concretizing of the neuroplasticity theory is a phenomenon without a single doubt, as many world-renowned neuroscientists from the past could only claim this hypothesis and theory to be true. Although they lacked tangible and irrefutable evidence, one thing these specialists unanimously agreed upon is that your brain didn’t stop growing when you reached adulthood, actually quite the opposite as it never stopped growing. Take this small excerpt from an 1897 paper from “The American Journal of Psychology” that discusses this, “intelligence… enables the organism to make better adaptations. Its neural pre-requisite is plasticity.” Back to gray matter. The flip side to this is the fact that these neuron pathways can also disintegrate and become forgotten. All the Saints You Should Know. TYWKIWDBI ("Tai-Wiki-Widbee"): The religion of Genghis Khan. "Eyewitnesses report that upon reaching the center of Bukhara, Genghis Khan rode up to the large mosque and asked if, since it was the largest building in the city, it was the home of the sultan. 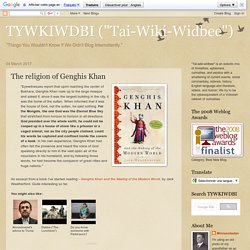 Camille Paglia Discusses Her War on 'Elitist Garbage' and Contemporary Feminism. For five years, art history professor and controversial pro-sex feminist Camille Paglia has been quiet—at least by the standards she set in the 1990s when she sparked controversy for everything from questioning the existence of date rape to hailing Madonna as "the future of feminism. " During the Obama era, she published one book and occasional viral essays, like her Sunday Times cover story about how Rihanna is the new Princess Diana. Most her time revolved around teaching at the University of the Arts and studying artifacts from Native American tribes who lived in southeastern Pennsylvania 10,000 years ago.

This week, though, Paglia returns with a new book, Free Women, Free Men: Sex, Gender, and Feminism, collecting her greatest hits about gender, sex, and feminism from 1990 to 2016. Read more: How the Push to 'Break the Silence' Fails the Feminist Movement. There Is Nothing Normal About the Snowstorm About To Slam the East Coast. An American Robin red breast, an iconic herald of spring, caught in an icy snowstorm. In case you're wondering—this is not normal. SHSPhotography/Getty Images This story was originally published by Grist and is reproduced here as part of the Climate Desk collaboration. The calendar might say March, but winter isn't done yet on the East Coast. Carl Jung Depth Psychology: Carl Jung’s Letter on Astrology.

Dear Prof. Raman, 6 September 1947 I haven’t yet received The Astrological Magazine, but I will answer your letter nevertheless. Inside the Illuminati with Rosie Kay and Adam Curtis. The Darknet protects itself by being more robust against attacks. The Darknet is a part of the internet that people can access and use anonymously. This privacy and the ability to work away from prying eyes means that the network is frequently used for anonymous exchanges of sensitive information and for illegal activities such as drug trafficking, sharing child pornography or exchanging protected intellectual property free of charge.

No, really, pi is wrong: The Tau Manifesto by Michael Hartl. An AI Completed 360,000 Hours of Finance Work in Just Seconds. Grace Slick’s “White Rabbit” Vocal Track Surfaces, And It’s The Greatest Thing You’ll Hear All Day. “One Pill Makes You Larger, And One Pill Makes You Small…” Super-Nice People May Be More Likely to Betray You. When it comes to people, it’s the sickly-sweet ones you have to watch out for. That’s the conclusion of a study by a team of linguists and computer scientists, who analyzed the conversational patterns of people playing an online strategy game. As writer Rachel Ehrenberg explains in Science News, interpersonal conflicts like betrayal can be very difficult to study.