Shadow Self: Embracing Your Inner Darkness. 21 Signs You're Experiencing "Soul Loss" How to Discover Your Deepest, Darkest "Core Wound" In life, we all have the tendency to believe that we are unworthy on some deep, undefinable level. Whether we believe that we are unworthy of happiness, pleasure, love or fulfillment, we all have a “core wound” deep inside that varies according to our circumstances and experiences. This deep, fundamental wound is the result of the foundational beliefs that we were taught since birth, contributing to the faulty self-image that we continue to carry around with us to this very day.

Our core wounds are our deepest seated pains in life. They are our oldest and most miserable friends. How to Change Your Core Beliefs in 9 Steps. Our core beliefs are at the very center of who we are, what we believe about ourselves, what we think of others and how we feel about life as a whole. 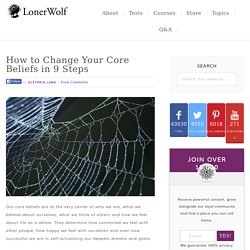 They determine how connected we feel with other people, how happy we feel with ourselves and even how successful we are in self-actualizing our deepest dreams and goals. There is no doubt that discovering what your core beliefs are is an essential part of the journey of involution; of the healing process of inner growth. In my last article I wrote about the process of identifying your core beliefs, and in this article I will explore how to change your core beliefs. This is such a downplayed and underrated part of our spiritual journeys through life, but in my experience it is one of the most essential for true, deep healing.

How to Change Your Core Beliefs That Control How You Think and Feel Once you have discovered your core beliefs, the next step is to actively replace them. 1. 2. 3. Often our core beliefs sound completely ridiculous. What Is Involution? 100 Wonders: The Temple of Damanhur. What Really Is the Law of Attraction? Over the past few years there has been a lot mentioned about the "law of attraction" to the point of making it a cheesy, fluffy and often annoying concept. 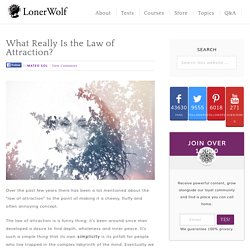 The law of attraction is a funny thing; it's been around since man developed a desire to find depth, wholeness and inner peace. It's such a simple thing that its own simplicity is its pitfall for people who live trapped in the complex labyrinth of the mind. Eventually we stop paying attention to it. Then after a while someone "rediscovers" this secret to happiness and everyone gets excited about it until it's old news and gets forgotten again.

Each recent generation has had its own popular version of the "law of attraction": from Napoleon Hill's post-great depression book "Think and Grow Rich," Norman Vincent Peale's post-WWII book "Power of Positive Thinking," to Tony Robbins' baby boomers book "Unleash the Giant Within," and of course Rhonda Byrne's social media generation book "The Secret. " Getting Personal: The Uberification of Learning — The Synapse. Getting Personal: The Uberification of Learning In a recent, thought-provoking blog post, entrepreneur, Zack Kanter predicted that Uber’s autonomous cars will destroy millions of jobs and reshape the global economy by 2025. 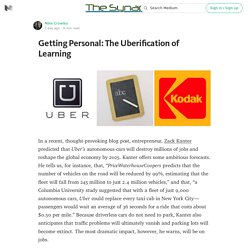 Kanter offers some ambitious forecasts. He tells us, for instance, that, “PriceWaterhouseCoopers predicts that the number of vehicles on the road will be reduced by 99%, estimating that the fleet will fall from 245 million to just 2.4 million vehicles,” and that, “a Columbia University study suggested that with a fleet of just 9,000 autonomous cars, Uber could replace every taxi cab in New York City — passengers would wait an average of 36 seconds for a ride that costs about $0.50 per mile.” Because driverless cars do not need to park, Kanter also anticipates that traffic problems will ultimately vanish and parking lots will become extinct.

Passports Were Once Considered Offensive—Perhaps They Still Are. A passport belonging to Russian-born American ballet dancer Adolph Bolm. 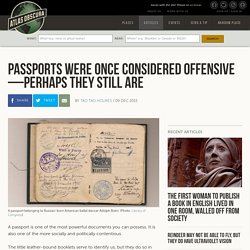 (Photo: Library of Congress) A passport is one of the most powerful documents you can possess. It is also one of the more socially and politically contentious. The little leather-bound booklets serve to identify us, but they do so in stark, non-nuanced ways that don't tell the full story of who we are—or may even distort it. The Danish Anarchists Who Inspired SantaCon Could Not Have Imagined Its Bro-Hell Future. 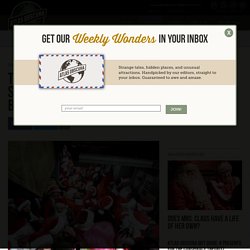 (Photo: Jason Eppink/flickr) A sea of red and white coats rancorously swarm down thousands of streets. How a Famed New Age Retreat Center Helped End the Cold War. Boris Yeltsin strikes a pose in his Moscow office in February, 1989. 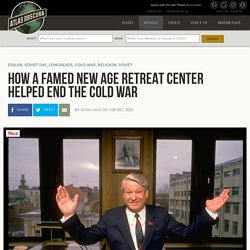 (Photo: Ted Thai/Getty Images) Early one morning, in September 1982, hundreds of young Russians were waiting in a Moscow TV studio for an image of Southern California to appear on a giant screen. The Ties That Bind Jihadists. Jonathan Krause for The Chronicle Thomas Hegghammer has spent the past 14 years studying jihadist groups. 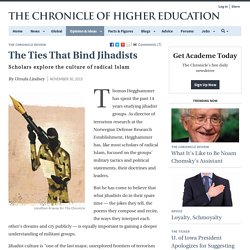 Blues on Wheels. After taking a personality test online and another exam consisting mostly of questions evaluating the sharpness of my memory, I was granted a five-minute interview and hired as a city carrier assistant (CCA) for the United States Postal Service. 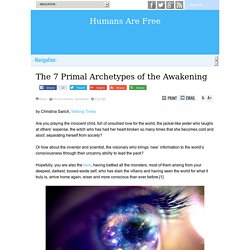 Or how about the inventor and scientist, the visionary who brings ‘new’ information to the world’s consciousness through their uncanny ability to lead the pack? Hopefully, you are also the hero, having battled all the monsters, most of them arising from your deepest, darkest, tossed-aside self, who has slain the villains and having seen the world for what it truly is, arrive home again, wiser and more conscious than ever before.[1] There are literally thousands of archetypes that we utilize to evolve spiritually, but there are seven that are so common it is beneficial to understand them. The Price of Admission: Dan Savage on the Myth of “The One” and the Unsettling Secret of Lasting Love. By Maria Popova “What is love but acceptance of the other, whatever he is,” Anaïs Nin wrote in a letter to her then-lover, Henry Miller. 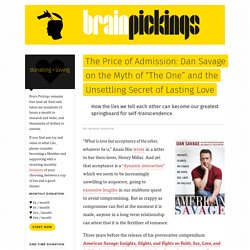 And yet that acceptance is a “dynamic interaction” which we seem to be increasingly unwilling to acquiesce, going to excessive lengths in our stubborn quest to avoid compromising. But as crappy as compromise can feel at the moment it is made, anyone in a long-term relationship can attest that it is the fertilizer of romance. Stendhal on the Seven Stages of Romance and Why We Fall Out of Love: Timeless Wisdom from 1822. Love is perhaps the most fertile subject of literature, music, and all the arts. Kurt Vonnegut believed you’re only allowed to be in love three times in your life. It has been described as a matter of bravery, a limbic revision, the greatest insurance against regret. For Peanuts creator Charles Schulz, it is simply, sweetly walking hand in hand. Why We Fall in Love: The Paradoxical Psychology of Romance and Why Frustration Is Necessary for Satisfaction. Adrienne Rich, in contemplating how love refines our truths, wrote: “An honorable human relationship — that is, one in which two people have the right to use the word ‘love’ — is a process, delicate, violent, often terrifying to both persons involved, a process of refining the truths they can tell each other.”

But among the dualities that lend love both its electricity and its exasperation — the interplay of thrill and terror, desire and disappointment, longing and anticipatory loss — is also the fact that our pathway to this mutually refining truth must pass through a necessary fiction: We fall in love not just with a person wholly external to us but with a fantasy of how that person can fill what is missing from our interior lives. Psychoanalyst Adam Phillips addresses this central paradox with uncommon clarity and elegance in Missing Out: In Praise of the Unlived Life (public library). Phillips writes: James Thurber on Longing, Unrequited Love, and the Power of a Kiss. By Maria Popova “The person you fall in love with really is the man or woman of your dreams,” psychoanalyst Adam Phillips wrote in his magnificent treatise on the paradoxical psychology of how we fall in love. “You have dreamed them up before you met them; not out of nothing — nothing comes of nothing — but out of prior experience, both real and wished for.”

Two centuries earlier, Stendhal outlined the psychological machinery of this dreaming-up in his timelessly insightful 1822 treatise on love, describing the seven stages of “crystallization” — the process by which we fall in love with a fantasy that we project onto a prospective lover, only to end up gravely disappointed and heartbroken when the real person fails to live up to the fantasy. In a lengthy 1920 letter to his college best friend, found in the altogether delectable The Thurber Letters: The Wit, Wisdom and Surprising Life of James Thurber (public library), Thurber writes: Ada Lovelace on the Nature of the Imagination and Its Three Core Faculties.

If you are planning to go vote during that time, you should read this article before doing so. The right to vote is not what you think it is. When you vote, you are voting for a foreign candidate that represents a foreign corporation called the United States of America, Incorporated. Proof that the United States of America (Minor) is a foreign corporation. In Conversation With Brian Eno — How We Get To Next. In Conversation With Brian Eno Steven Johnson sits down for a discussion about music, imagination, and art Earlier this year, the artist and musician Brian Eno delivered the annual BBC Music John Peel Lecture on the the question of whether art was a “luxury,” and how we ought to go about measuring its value.

Eno spoke at length about his definition of art and culture, and its continued importance in an era increasingly focused on STEM values—science, technology, education, and math—where it can sometimes feel as though the goal of our education leaders and politicians is simply to train a new generation of C++ programmers. I listened to it, appropriately enough, driving up Interstate 280 through Silicon Valley after a visit to the Computer History Museum, and it struck me that Eno had made an essential point about the role of art in both creating and making sense of social transformation. Access Denied. Earlier this year a young employee at a celebrity magazine explained to me a problem.

The magazine was doing reasonably well, as was its website. But both were publishing photos taken from Instagram with increasing frequency. Scott Weiland: 'This Is My Life, a Cautionary Tale. Maybe Somebody Can Learn from It.' 12 Simple Rituals To Help You Release 2015. Priceonomics. Maps of the Earth's Most Cursed Destinations. 6 Ways You Can Overcome Shyness. Does Renting into Your 30s Make You a Giant Failed Adult Baby? This Is How You're Going to Get Laid in the Future. Forgotten Rituals and Magical Practices in Ancient History. Hypnotized Subject Talks About the Shift and the New Earth. The haunting link between two mass shootings.