Why I switched to Byword from WriteRoom for my Mac text editing. WriteRoom, which I started using in 2007, must be one of the applications which I've used most consistently, and which—I've written about it several times—have given me the most satisfaction, over the past four years. 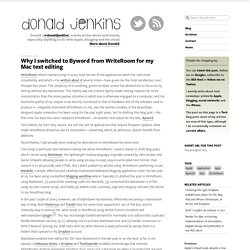 The simplicity of its soothing, green-on-black screen has allowed me to focus on my writing without any distractions. This fidelity was not a choice lightly made: writing requires far more concentration than the more passive activities in which one is otherwise engaged on a computer, and I've found the quality of my output to be directly correlated to that of hardware and of the software used to produce it—elegantly-minimalist WriteRoom, to me, was the worthy corollary of the beautifully-designed Apple computers I've been using for the past eight years. Byword. March 14, 2012 You can’t throw a rock at the iTunes and Mac App Stores without hitting a minimalistic writing app. 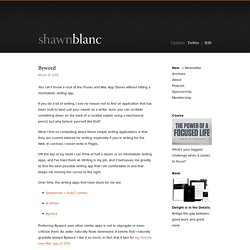 If you do a lot of writing, I see no reason not to find an application that has been built to best suit your needs as a writer. Sure, you can scribble something down on the back of a cocktail napkin using a mechanical pencil, but why torture yourself like that? What I find so compelling about these simple writing applications is that they are custom tailored for writing, especially if you’re writing for the Web. In contrast, I never write in Pages. Sent From Byword 2 — Shawn Blanc. June 4, 2013 Byword on the Mac is one of the three apps in my writing workflow toolkit — working alongside nvALT and MarsEdit, it is my go-to writing app for anything longer than a few sentences. 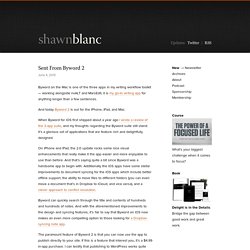 And today Byword 2 is out for the iPhone, iPad, and Mac. When Byword for iOS first shipped about a year ago I wrote a review of the 3-app suite, and my thoughts regarding the Byword suite still stand: it’s a glorious set of applications that are feature rich and delightfully designed. On iPhone and iPad, the 2.0 update rocks some nice visual enhancements that really make it the app easier and more enjoyable to use than before. And that’s saying quite a bit since Byword was a handsome app to begin with. Byword can quickly search through the title and contents of hundreds and hundreds of notes. The paramount feature of Byword 2 is that you can now use the app to publish directly to your site.

Needless to say, I’m really excited about all the updates to Byword. Back with Byword. Choosing Markdown Software - live your best dreams. Not too long ago, having a website required at least a little knowledge of HTML (HyperText Markup Language). 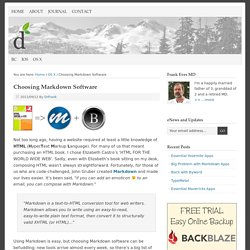 For many of us that meant purchasing an HTML book. I chose Elizabeth Castro’s ‘HTML FOR THE WORLD WIDE WEB’. Sadly, even with Elizabeth’s book sitting on my desk, composing HTML wasn’t always straightforward. Fortunately, for those of us who are code-challenged, John Gruber created Markdown and made our lives easier. It’s been said, "if you can add an emoticon to an email, you can compose with Markdown. " Markdown: Why Byword App? - live your best dreams. It’s no secret that I’m a huge fan of John Gruber’s Markdown. 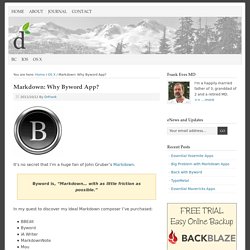 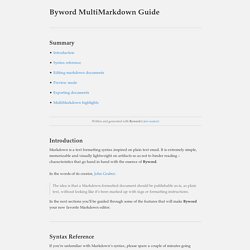 It is extremely simple, memorizable and visually lightweight on artifacts so as not to hinder reading – characteristics that go hand in hand with the essence of Byword. In the words of its creator, John Gruber: The idea is that a Markdown-formatted document should be publishable as-is, as plain text, without looking like it’s been marked up with tags or formatting instructions.

In the next sections you’ll be guided through some of the features that will make Byword your new favorite Markdown editor. Syntax Reference If you’re unfamiliar with Markdown’s syntax, please spare a couple of minutes going through the syntax guide. Editing Markdown documents This section is dedicated to introduce you to the differences between editing plain/rich text documents and Markdown documents. Byword. Byword Support. How to change the default save location on Byword for Mac? 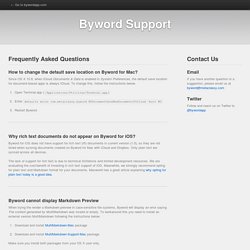 Since OS X 10.8, when iCloud Documents & Data is enabled in System Preferences, the default save location for document-based apps is always iCloud. To change this, follow the instructions below. Open Terminal.app (/Applications/Utilities/Terminal.app) Enter defaults write com.metaclassy.byword NSDocumentSaveNewDocumentsToCloud -bool NO Restart Byword. Byword Extras. Simple and efficient text editor for Mac, iPhone and iPad. Byword Still Gets the Job Done. I was looking at the latest sexy text editor, Typed from RealMac. 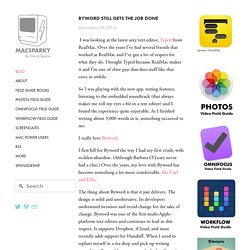 Over the years I’ve had several friends that worked at RealMac and I’ve got a lot of respect for what they do. I bought Typed because RealMac makes it and I’m one of those guys that does stuff like that once in awhile. So I was playing with the new app, testing features, listening to the embedded soundtrack (that always makes me roll my eyes a bit in a text editor) and I found the experience quite enjoyable. As I finished writing about 3,000 words in it, something occurred to me.