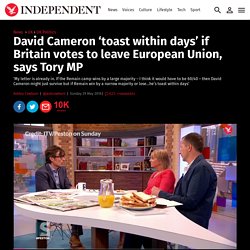 The intervention by Nadine Dorries, Conservative MP for Mid Bedfordshire, comes amid an intense escalation of in-fighting in the party and bitter personal attacks over the referendum on June 23. Brexit heavyweights Michael Gove, Boris Johnson and Priti Patel all questioned the Prime Minister’s credibility. Speaking on ITV’s Peston on Sunday, Ms Dorries revealed that she has already submitted her letter to Graham Brady, chairman of the 1922 Committee, calling for a vote of no confidence in Mr Cameron. She also confirmed she was supporting Mr Johnson, the former Mayor of London, to succeed Mr Cameron.

Party rules dictate that 50 backbenchers must follow suit to trigger a vote of no confidence. She said: “My letter is already in. Ms Dorries insisted a "considerable" number of Tory MPs shared her view. EU referendum: the pros and cons of Britain voting to leave Europe. On 23 June, the UK will settle a question that's been rumbling close to the surface of British politics for a generation: should the country remain within the European Union, or leave the organisation and go it alone. 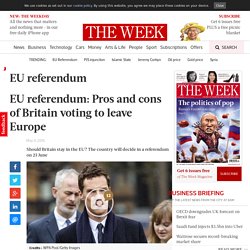 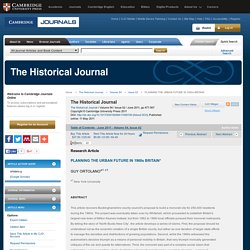 The project was eventually taken over by Whitehall, which proceeded to establish Britain's largest new town of Milton Keynes instead, but from 1962 to 1968 local officials pursued their monorail metropolis. (Online publication May 11 2011) Correspondence: c1 Department of History, New York University, 53 Washington Square South, New York, NY 10012, USA ortolano@nyu.edu * I am grateful to Clare Jackson and the anonymous reviewers for the Historical Journal for their comments and suggestions. David Cameron's EU speech in full. 'The challenge of preparing pupils for the future' "Many young people will work in industries that do not yet exist and will change jobs multiple times. 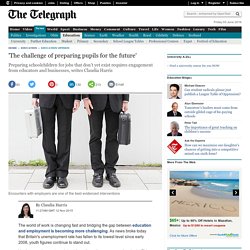 The Idea of Greater Britain: Empire and the Future of World Order, 1860-1900. PU1524_IUK_new_template. David Cameron: Britain's 'future' in EU at stake over immigration. The Prime Minister also said that Britain must have the right to make European migrants wait four years before receiving welfare or council houses. 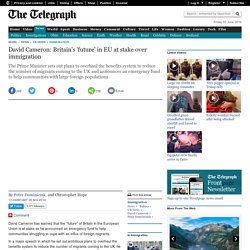 And he said that he wants to ban foreign jobseekers claiming benefits and deport them from the UK if they do not find work within six months. Foreigners will also be banned from sending millions of pounds worth of child benefit payments and tax credits abroad if they do not bring their children with them to the UK, Mr Cameron said. The Prime Minister set out a number of “red lines” for his forthcoming renegotiation with Brussels, which he said will require EU treaties to be changed. N150227_-_Highways_England_Planning_Document_FINAL-lo. Britain and the world in the next fifty years. Click here to download as a PDF document Speech delivered to ImpactPlus, 2000 When I am called to account at that great court in the sky, and I have to atone for my sins; one of them is that I was Secretary of Mensa for thirteen years. 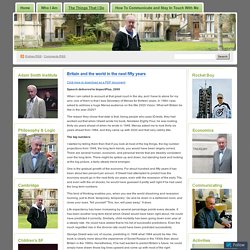 In 1984 I was asked to address a huge Mensa audience on the title 2020 Vision: What will Britain be like in the year 2020? The reason they chose that date is that, being people who pass IQ tests, they had worked out that when Orwell wrote his book, Nineteen Eighty Four, he was looking thirty six years ahead of when he wrote in 1948. Mensa asked me to look thirty six years ahead from 1984, and they came up with 2020 and that very catchy title. The big numbers I started by telling them then that if you look at most of the big things, the big number projections from 1948, the long term trends, you would have been largely correct.

Why England’s future is bright. Setting free such strengths produces the drive and entrepreneurial spirit that creates the wealth and the explosion of culture upon which the strength of that one nation depends. 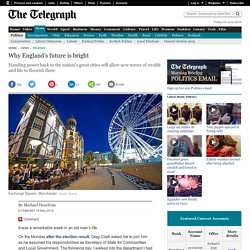 Creating a Northern Powerhouse is a central part of such a vision. Linking the great eighteenth century cities provides a scale of human and economic resource equal to the world competition we face. Manchester, Liverpool, Leeds, Newcastle, Sheffield and Hull each have talent and expertise that can be enriched by improved communications with each other. Better transport enables people to move and work where their talents are more effectively engaged.

Investors can draw on larger numbers of skilled recruits. All of this needs leadership and accountable governance. No one should underestimate the historic significance of these changes. Central governments driven by universal suffrage introduced an ever wider system of support financed by central taxation. David Cameron: The next age of government.