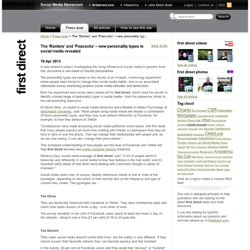 The Ultras They are fanatically obsessed with Facebook or Twitter. The Deniers The Dippers The Ghosts. Smartphone Adoption Tips Past 50% in Major Markets Worldwide. According to new figures from eMarketer, several markets worldwide reached a milestone in mobile usage last year. By the end of 2012, over half of mobile phone users in each country had made the switch from feature phones to smartphones. The coming years will see a domino effect hit regions around the world as smartphones become the norm in more places. The worldwide smartphone penetration rate among mobile users will remain just under one-third in 2013, eMarketer expects, and will approach the halfway point by 2017.

Moms on forefront of tech world. GRAND JUNCTION, Colo. (KKCO) - New research reveals one-third of moms own a tablet, and women are online almost three hours per day. All of this new data was revealed by the MamaBear Family Tech Conference at the Microsoft Office Center in California. "I really like it," said Jessica Compton, a mom of three. "I can really connect with my other friends that I wouldn't be able to. " Women are becoming the superusers of technology. "It's easier than sending pictures through the mail or emailing," she said.

Report: One-Third Of U.S. Moms Own Connected Devices, 97% Of iPad Moms Shopped From Their Tablet Last Month. Remember when everyone in the tech industry sort of took a step back, looked at Pinterest, and said, whoa, this whole digital moms demographic might have some legs to it? 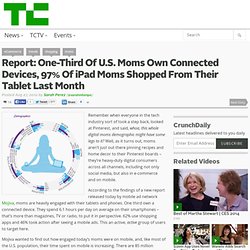 Well, as it turns out, moms aren’t just out there pinning recipes and home decor to their Pinterest boards – they’re heavy-duty digital consumers across all channels, including not only social media, but also in e-commerce and on mobile. According to the findings of a new report released today by mobile ad network Mojiva, moms are heavily engaged with their tablets and phones. One third own a connected device.

They spend 6.1 hours per day on average on their smartphones – that’s more than magazines, TV or radio, to put it in perspective. 62% use shopping apps and 46% took action after seeing a mobile ads. This an active, active group of users to target here. Mojiva wanted to find out how engaged today’s moms were on mobile, and, like most of the U.S. population, their time spent on mobile is increasing. 93 Percent of Moms Shopped Significantly More on Their Mobile Devices in 2012 Than in 2011. SAN FRANCISCO, CA--(Marketwire - Jan 10, 2013) - 2013 could be the year that moms and mobile shopping become inextricably linked, according to an end-of-year survey conducted by Alt12 Apps, the world's largest mobile network for women including apps BabyBump, Pink Pad and Kidfolio. 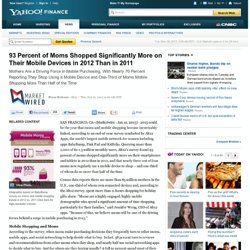 Querying more than 1,000 of its 1.3 million monthly users, Alt12's survey found 93 percent of moms shopped significantly more on their smartphones and tablets in 2012 than in 2011, and that nearly three out of four moms now regularly use a mobile device to shop -- and one-third of whom do so more than half of the time. Census data reports there are more than 85 million mothers in the U.S., one-third of whom own connected devices and, according to the Alt12 survey, spent more than 11 hours shopping for holiday gifts alone.

Customer Behavior - 50% of Moms Would Engage With Brands on Facebook If Rewarded. Some 81% of moms would buy more from a brand if rewarded, and over 50% are willing to engage with a brand on Facebook and other social media platforms if provided incentive, according to a recent report by PunchTab. 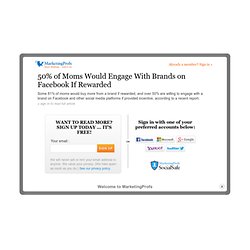 What type of rewards do moms want? Social Moms Lead the Way to Mobile. According to a new eMarketer report, “The Mobile-Social Mom: Speeding the Trend Toward 'Mobile First',” if you want to know who is moving over to mobile social media, look no further than mom. eMarketer estimates that as many as half of all moms with children under 18 in the household will use mobile devices to access social networks in 2012. 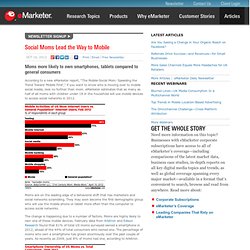 Moms are on the leading edge of a behavioral shift that has marketers and social networks scrambling. They may soon become the first demographic group who will use the mobile phone or tablet more often than the computer to access social networks. The change is happening due to a number of factors. Top 5 Qualities Moms Want in Mobile & Tablet Apps. Moms are more likely than the general population to own a both a smartphone and a tablet. 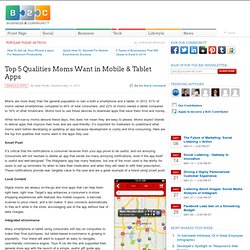 In 2012, 61% of moms owned smartphones compared to 44% of total consumers, and 22% of moms owned a tablet compared to 16% of other Americans. Moms love to use those devices to download apps that save them time and money. While tech-savvy moms abound these days, this does not mean they are easy to please. Moms expect brands to deliver apps that improve their lives and are user-friendly. Marketing to Moms. Mom Most Traveled » Nielsen Online Top 50 Power Mamas. Have you heard of the Top 50 Power Mamas list, compiled by Nielsen Online? 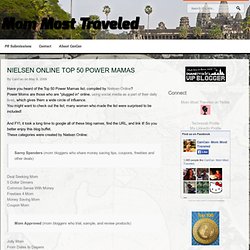 Power Moms are those who are *plugged in* online, using social media as a part of their daily lives, which gives them a wide circle of influence. You might want to check out the list; many women who made the list were surprised to be included! And FYI, it took a long time to google all of these blog names, find the URL, and link it! So you better enjoy this blog buffet. Top Mommy Bloggers: Worlds Most Powerful Social Media Influencers to Treat and Pamper - Sparkah Business Consulting Tackles Marketing, Google, Sales, and Strategic Alliances. I’m going to introduce you to the most powerful people on earth. 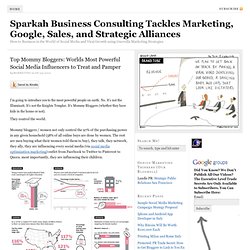 No. It’s not the Illuminati. It’s not the Knights Templar. Social Advertisers Rely on Branded Pages More Than Paid Ads. Although it’s been one year since Facebook’s underwhelming initial public offering, the bloom has not quite come off the social media rose. eMarketer estimates that US social network ad spending will grow 31.6% in 2013, to total $4.2 billion by the end of the year. Mobile Marketing Articles - Page 1 : Marketing Resources and Strategies. Seven Tips for Creating a Mobile-Aware Marketing Culture. Can your company afford to ignore the rapidly expanding mobile marketplace? 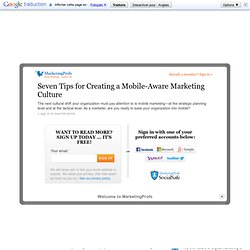 A recent poll from the Mobile Marketing Association (see Figure 1) confirms that disregarding the mobile market is a mistake that marketers want to avoid, and tech research firm Gartner finds that global sales of smartphones and tablets will surpass 1 billion units in 2013. ("Smart device sales to hit 1B next year," Mobile World Live); sales estimates for 2012 exceed 800 million. As a marketer, are you ready to ease your organization into yet another cultural shift related to online marketing? Top Mobile Web Destinations by Category: Google (News), ESPN (Sports), Amazon (Shopping)... Google is the most popular Web destination among users of mobile devices, according to new data from Hitwise Mobile : Google attracted 17.27% of total Web traffic via mobile device for the week ended February 23, 2013. YouTube received the second largest share of mobile visits for the week with 4.55%, followed by Facebook with 2.65%.

Gmail and Wikipedia rounded out the top five, attracting 1.54% and 1.17%, respectively, of total Web traffic via mobile device. Customer Behavior - TV, Mobile, PCs Complement Each Other for News Consumption [Infographic] Tablets complement, rather than replace, TV news viewing, and the 25-34 age demographic constitutes the biggest news enthusiasts, according to a BBC World News and bbc.com/news global study they said was the largest to date on the consumption of news in the digital age. In general, people layer their device usage throughout the day to consume news, the survey conducted by InSite Consulting found.

Survey participants were top income earners and owners of at least three devices among the following: television, tablet, smartphone, and laptop or desktop computer. Social Takes Up 27% of Time Spent Online. The App Arms Race: iOS vs. Android [Infographic] The feud between iOS (Apple's mobile operating system) and the Android mobile operating system keeps heating up. 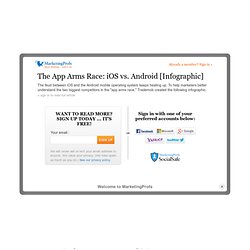 To help marketers better understand the two biggest competitors in the "app arms race," Trademob created the following infographic. The infographic compares the market penetration, user demographics, and advertising related to iOS and Android. 7 in 10 Smartphone Owners Access Facebook via Their Device. Smartphones have become the central social, communication, and information tool for growing numbers of younger Americans, according to a study conducted by IDC for Facebook. Publications Women Described As The "Low Hanging Fruit of Social Media" 03/20. 5 Reasons Why Social Media Marketing Is Important. Facebook's user exodus: our readers tell us what's wrong. Facebook loses millions of users as biggest markets peak. Some experts believe Facebook's biggest problem is that most people who want to sign up have already done so. Photograph: Linda Nylind for the Guardian.

It’s probably not so surprising that the report shows Instagram and Pinterest as global leaders among the niche networks. Social Media: the next generation of upstart apps gunning for Facebook. Most people only use seven apps. For 751m million people in the world, Facebook is one of them. 91% of Moms Use Social Media Regularly: If Family Isn’t In, They’re Out. Social Network Demographics: Twitter, Pinterest, Instagram, Facebook. Samsung Sold Record 12.5M Smartphones in Q1 2013 in China. 11 tips for developing a mobile app that users will love. 47 percent of top retailers have a mobile site and app: study - Research. Portable Purchasing: Trends in Shopping via Tablets, Smartphones. Mobile marketing statistics 2013.